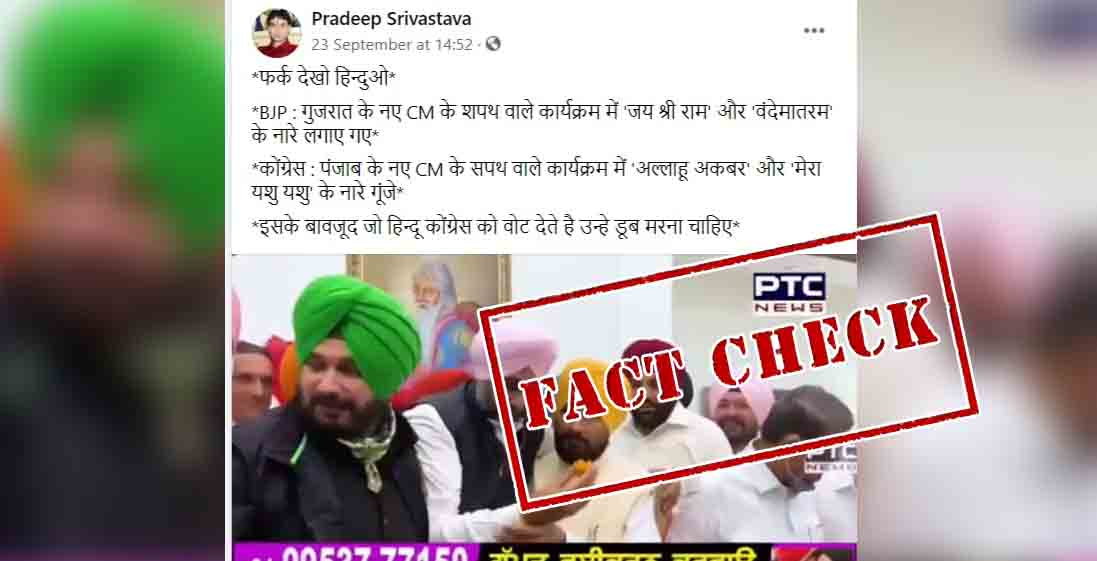 In this backdrop, a video is being shared on social media with a  communal slant to suggest that only ‘Allahu Akbar’ slogans were raised at Channi’s swearing-in ceremony.

(English Translation: See the difference Hindus. BJP: ‘Jai Shri Ram’ and ‘Vande Mataram’ slogans were raised in the swearing-in program of the new CM of Gujarat.
Congress: ‘Allahu Akbar’ and ‘My Yeshu’ slogans echoed in the oath ceremony of the new CM of Punjab. In spite of this, those Hindus who vote for Congress should drown.) 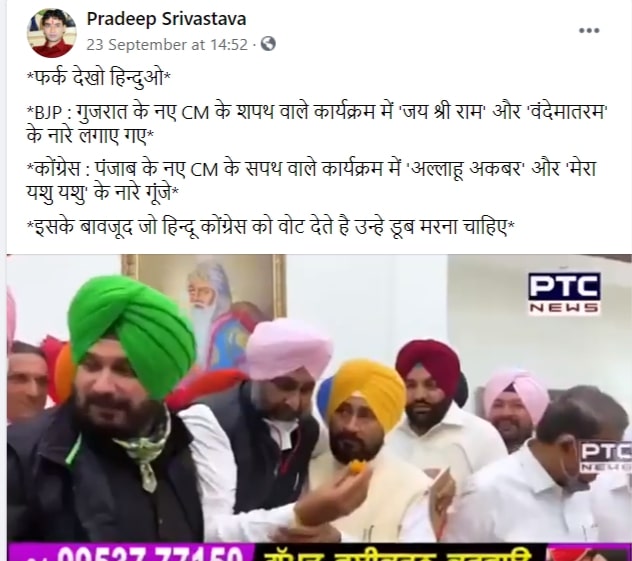 Here’s the link to the above post. Similar posts can be seen here and here.

NewsMobile fact-checked the video and found the claim to be misleading.

Since the viral video had the logo of PTC News at the top right corner, we scanned through their channel to look for the original video.

We found the longer version of the video which was streamed live on the Facebook page of PTC News on September 20, 2021. The video caption, originally written in Punjabi, can be translated to English as, “An atmosphere of celebration in the Congress on the appointment of Charanjit Channi as the Chief Minister. See Exclusive pictures.”

Upon carefully examining the video, we noticed the slogans of ‘Jo Bole So Nihal…Sat Sri Akal’, ‘Jaikara Sherawali Da’ and ‘Har-Har Mahadev’ were also raised.

At 00:36 sec of the video the slogans of ‘Naara-e-Taqbeer Allahu Akbar’ can be heard while ‘Jo Bole So Nihal, Sat Shri Akal’ can be heard at 1:05 min of the video and was repeated multiple times throughout the video. At 2:58 min, a man can be heard saying ‘Jaikara Sherawali Da’ while the crowd says ‘Sache Darbar Ki Jai’ followed by ‘Jaikara Veer Bajrangi, Har-Har Mahadev’.

Hence, from the above information, it is clear that a small clip from the original video is being shared to create a false and misleading narrative.

Earlier, NewsMobile has debunked multiple misleading and false posts related to political crisis in Punjab. The fact checks can be seen here and here.