Home NM FACT CHECKER Fact Check: No, The Couple Singing In The Video Is NOT Former... 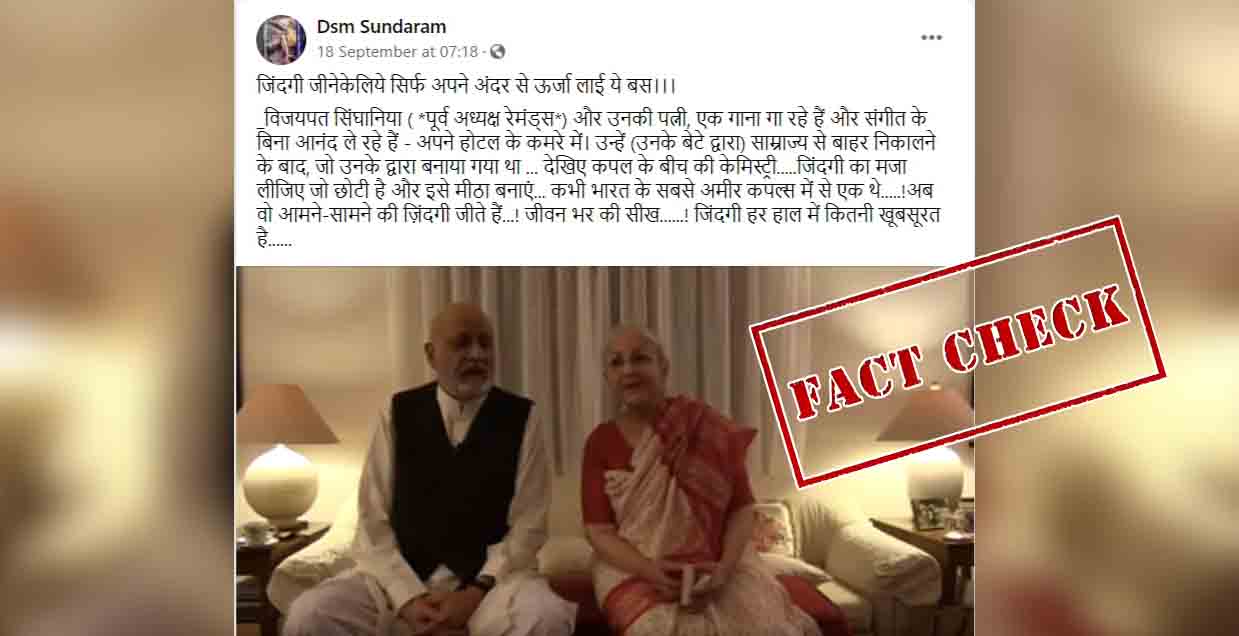 A video of an elderly couple, singing a song from the Bollywood movie ‘Pyaasa’, is being shared on social media. The post claims that the video is of Vijaypat Singhania, former chairman emeritus of the Raymond Group and his wife.

(English Translation: To live life, you only have to bring out energy from within. Vijaypat Singhania (Former President Raymonds) and his wife, singing a song and enjoying without music – in their hotel room. After he was driven out (by his son) from the empire which was built by him…see the chemistry between the couple…enjoy the life which is short and make it sweet…They were one of the richest couples! Now they live a face to face life…! Lifelong lesson! How beautiful is life.) 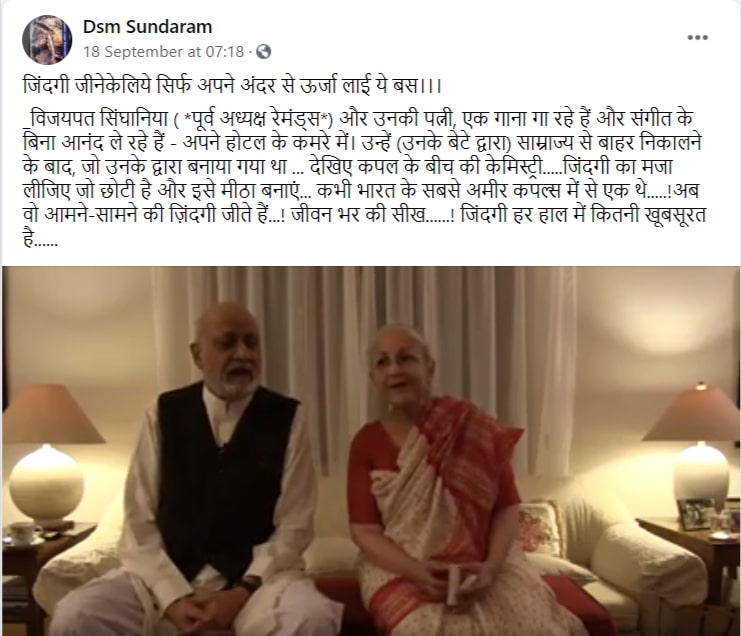 While looking for similar posts on social media, we found that the same video had been  shared on Facebook in 2017 as well, with a similar claim.

We then ran a keyword search along with a Reverse Image Search on keyframes of the video and found that the same video was shared on YouTube by a user Mahera Omar in March 2021. “Jane Woh Kaise Log Thai – In loving memory of Jamshed Omar,” the video was titled. 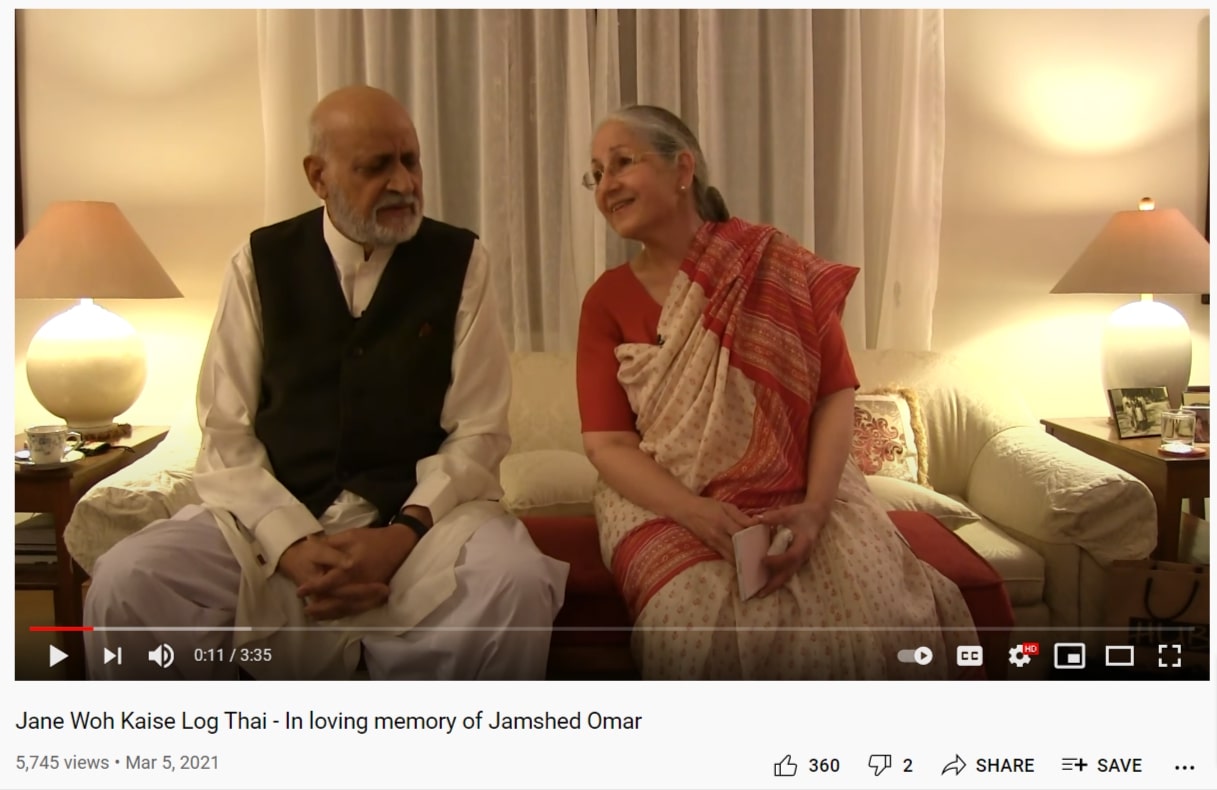 The description of the video read: About eight years ago my uncle Jamshed Omar and aunt Shama Husain sang a lovely duet at our home one evening. The original song was sung by Hemant Kumar in the 1957 movie Pyaasa directed by Guru Dutt and music director was SD Burman. Lyrics by Sahir Ludhianvi.

Based on this, we also scanned through Mahera Omar‘s social media pages, who is a documentary filmmaker based out of Karachi, Pakistan.
We found that Mahera shared the same video on her Instagram page as well, where she had clarified that the video is being shared with a false claim. 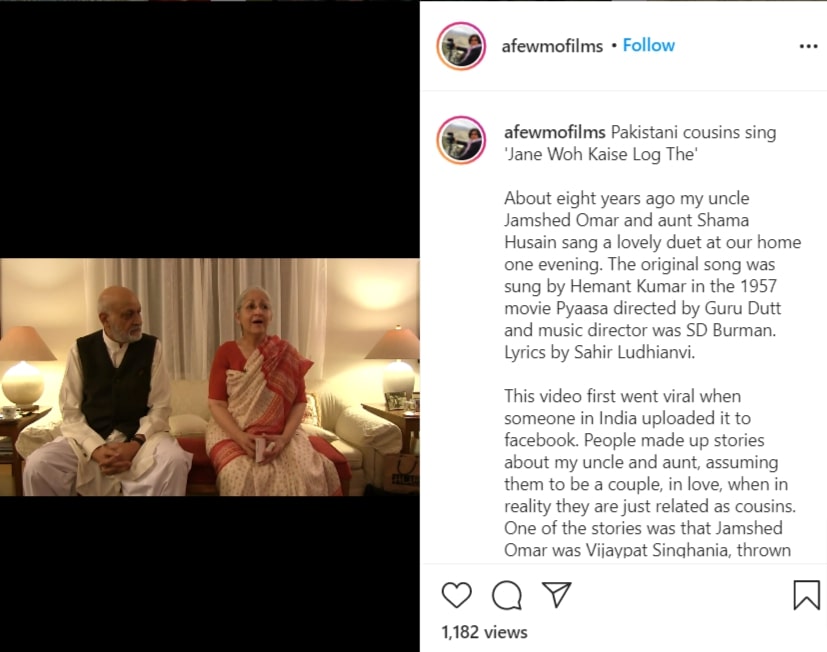 The Instagram post read: “Pakistani cousins sing ‘Jane Woh Kaise Log The’
About eight years ago my uncle Jamshed Omar and aunt Shama Husain sang a lovely duet at our home one evening. The original song was sung by Hemant Kumar in the 1957 movie Pyaasa directed by Guru Dutt and music director was SD Burman. Lyrics by Sahir Ludhianvi.
This video first went viral when someone in India uploaded it to facebook. People made up stories about my uncle and aunt, assuming them to be a couple, in love, when in reality they are just related as cousins. One of the stories was that Jamshed Omar was Vijaypat Singhania, thrown out of his house by his own son. The thousands of comments on that Facebook upload induced much mirth, but that page is nowhere to be found now.
Recently, an updated version of this video has been doing the rounds on TikTok and Instagram. On popular demand, here is the complete much loved original. Enjoy.
In loving memory of Jamshed Omar, who passed away earlier this year.”

Another video of them can be seen here.

Jamshed Omar was the Chairman of the Pakistan Super League (PSL) franchise Quetta Gladiators. In a tweet dated January 30, 2021, the official Twitter page of Greatest Gladiator said, “The Greatest Gladiator Has Fallen. It is with the deepest of grief to announce that our beloved Chairman – Omar Group of Companies, Mr. Jamshed Omar has left us for his heavenly abode after a brief illness on the eve of January 27.”

The tweet also mentioned that Jamshed Omar was a ‘profound Civil Engineer and recipient of International awards for Pakistan’. 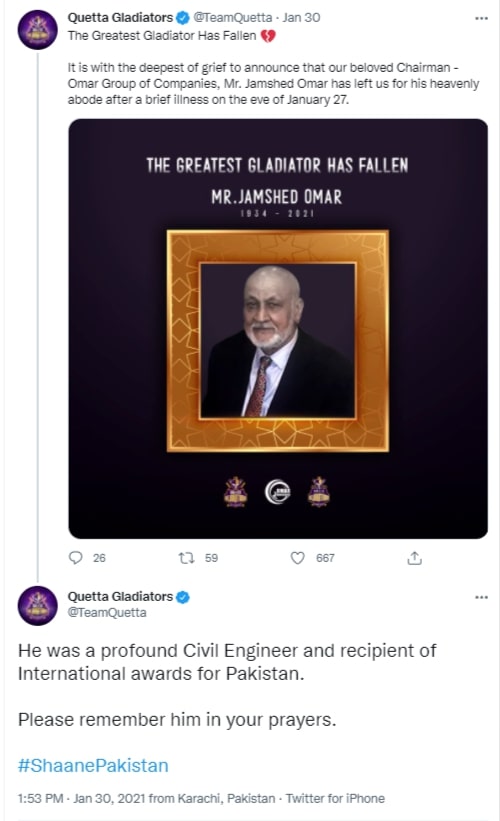 We also made a collage of Vijaypat Singhania and Jamshed Omar to show that the man in the video is Jamshed Omar.

Hence, from the above fact check, it is clear that the viral video is being shared with a false claim.