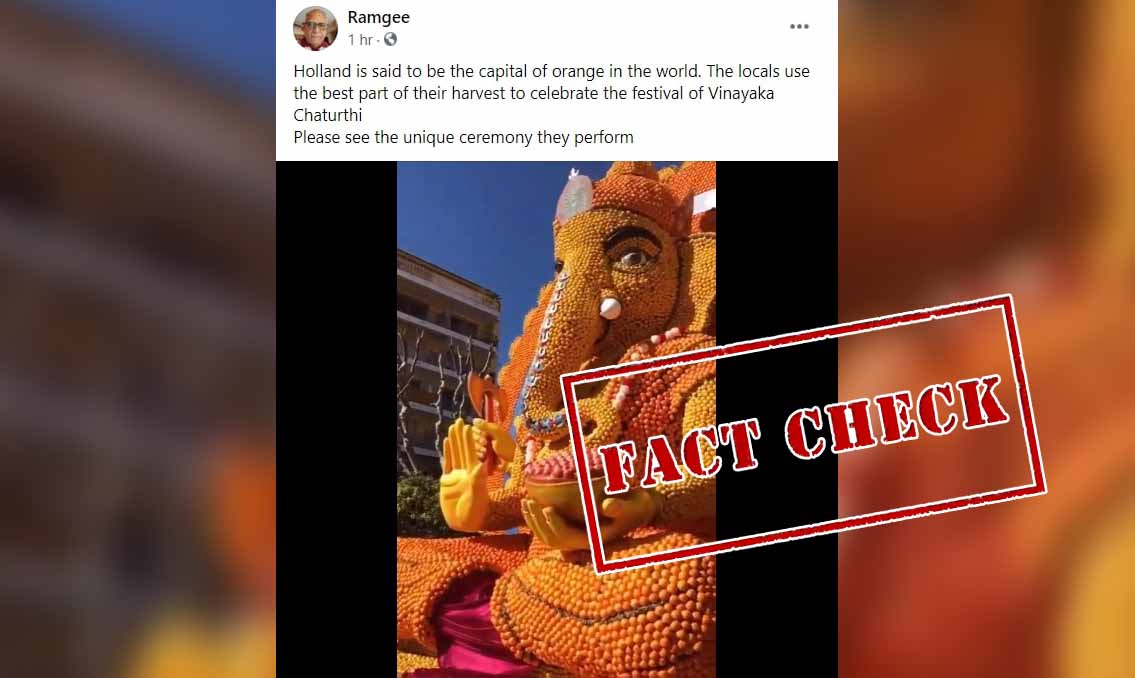 A video showing a big Ganesha idol, made of oranges and lemons, is doing rounds on social media with a claim that people of Holland celebrated Ganesh Chaturthi and the idol was made with recently harvested oranges.

“Holland is said to be the capital of orange in the world. The locals use the best part of their harvest to celebrate the festival of Vinayaka Chaturthi Please see the unique ceremony they perform,” the Facebook post read. 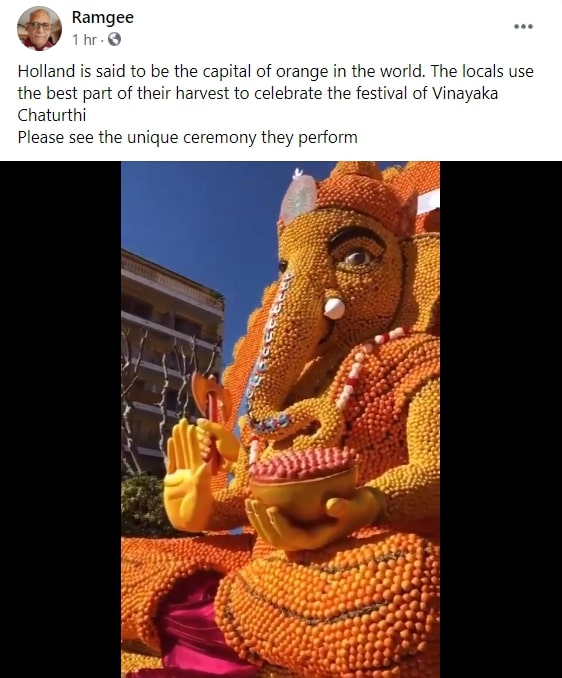 Here’s the link to the above post. More such posts can be seen here, here, here and here.

We extracted keyframes of the video and ran a Reverse Image Search along with a keyword search. The search led us to a tweet by France Magazine dated February 25, 2018, featuring an image of Ganesh similar to the one seen in the video.

“A Hindu god made from oranges and lemons… only at the #FeteduCitron in Menton! See what other sculptures they have made > http://bit.ly/FeteduCitron #travel,” the tweet read. 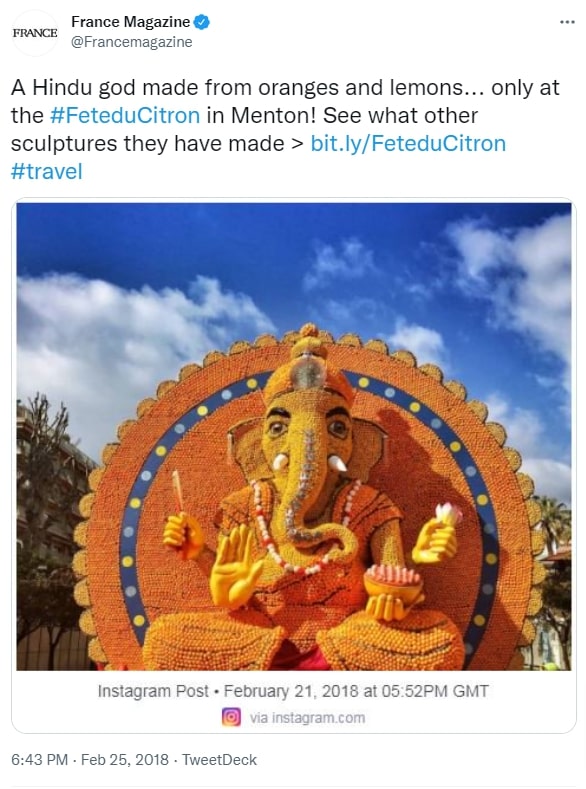 Taking a cue from this, we ran a keyword search and found a video on YouTube titled, ‘Fete du Citron 2018’. According to the video clips, the event took place in Menton, France and the theme was Bollywood. The same idol of Lord Ganesh can also be seen in the video. 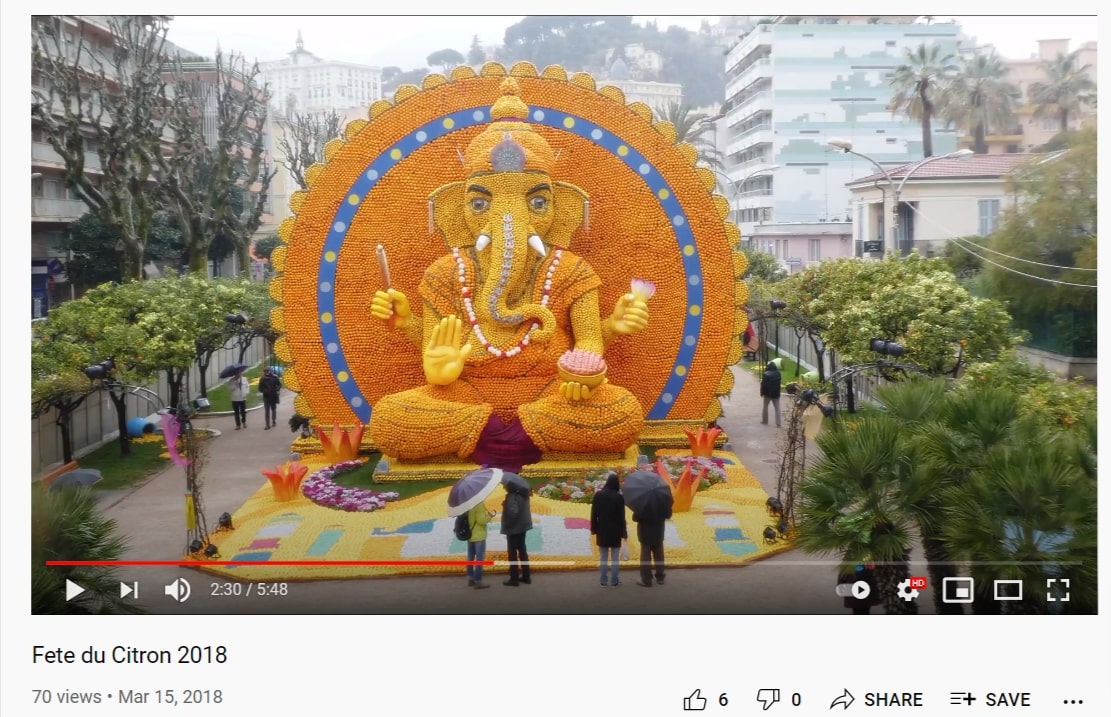 The images of the same were also available on Getty Images, Shutterstock and Agencia EFE, a Spanish international news agency.

Video of the same idol was shared on Shutterstock with a caption, “MENTON, FRANCE – FEBRUARY 18, 2018: Art made of lemons and oranges in the famous Lemon Festival (Fete du Citron) in Menton, France. The famous fruit garden receives 230,000 visitors a year.”

Meanwhile, the description on Getty Images read, “TOPSHOT – A sculpture of Hindu deity Ganesh, made of lemons and oranges, is pictured on the eve of the 85th Lemon Festival, on February 16, 2018, in Menton, southeastern France. The ‘Bollywood’ themed festival runs from February 17 to March 4, 2018. / AFP PHOTO / VALERY HACHE (Photo credit should read VALERY HACHE/AFP via Getty Images)”

This proves that the above video is from France and was shot in 2018 at the Fête du Citron festival.

What is Fête du Citron?

The Fête du Citron is an event organised by the tourist office of the city of Menton, France, every year at the end of winter.

According to their website, “In 1928, Menton was the number one lemon-growing region in Europe. An hotelier had the excellent idea of organising an exhibition of flowers and citrus fruits in the gardens of the Hôtel Riviera. It was so successful that, the following year, the event moved into the streets, with carts covered with orange and lemon trees along with lovely local girls. Wishing to develop tourism, the municipality sought to give to this new event a typically local colour: The Lemon Festival was born in 1935. One year later, the first exhibition of citrus fruit and flowers was launched in the Biovès gardens.”
This proves that the viral video is from France and NOT Holland. Moreover, the video is not related to the Hindu Festival of Ganesh Chaturthi. Hence, the viral claim is false.