Fact Check: No, These Images Do NOT Show Black Panthers Attacking Church In The USA | Newsmobile
Wednesday, October 5, 2022 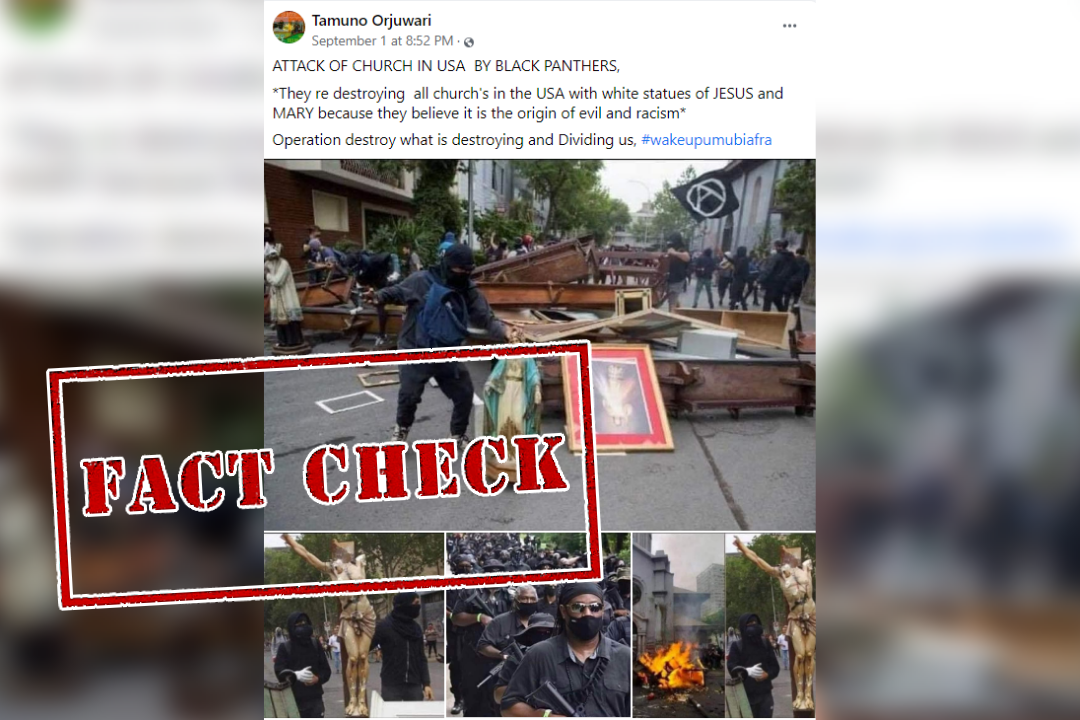 A collection of four images is being shared on social media claiming that they show members of the Black Panther attacking a church in the United States of America.

The Black Panthers, also known as the Black Panther Party, was a political organization founded in 1966 by Huey Newton and Bobby Seale to resist police brutality against the African American community. Sporting black berets and black leather jackets, the Black Panthers organized armed citizen patrols of Oakland and other U.S. cities.

The images are being shared on Facebook with a caption that reads, “ATTACK OF CHURCH IN USA BY BLACK PANTHERS. They’re destroying all churches in the USA with white statues of JESUS and MARY because they believe it is the origin of evil and racism. Operation destroys what is destroying and Dividing us.” 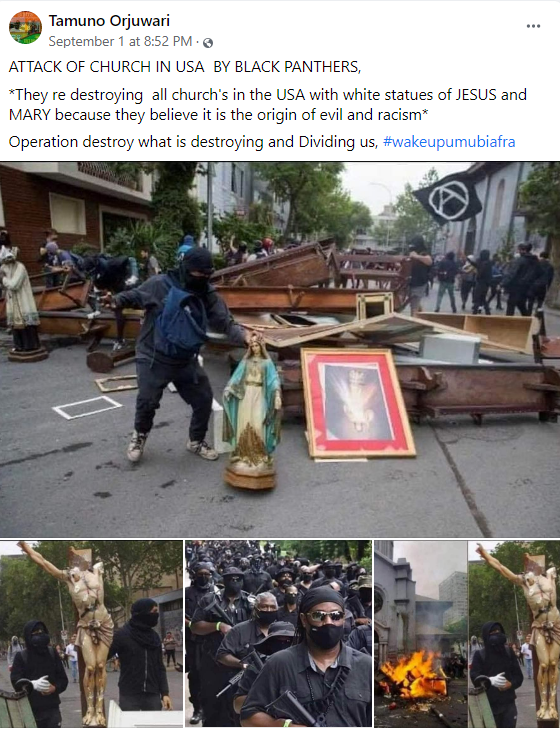 We did a Reverse Image Search of all four images and found out that none of the images shows members of the Black Panthers damaging or attacking any church in the USA.

This image shows a man in all black attire holding a statue of Mother Mary in his hand. Doing a Reverse Image Search directed us to many articles published in 2019 that carried the viral image. One of the articles translates to, “During the ongoing government protests in Chile, masked vandals, most likely identifying themselves as members of Antifa (one of the protesters holding a flag with the symbol of the movement, as well as anarchists), have demolished the Catholic church in Santiago. They threw out of him, among others the figure of Jesus, the figure of the Mother of God, and the image of Merciful Jesus.” Check a similar news article here. 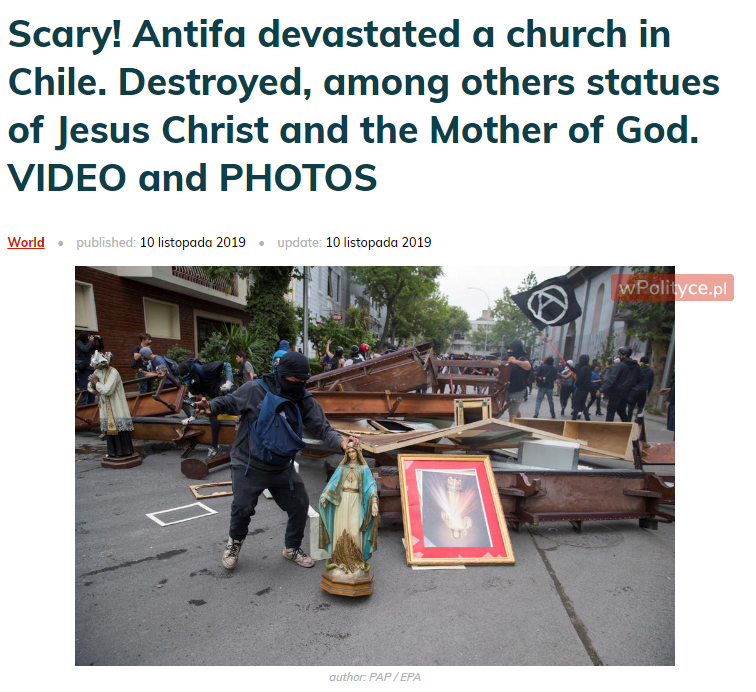 According to news articles, in 2019, people of Chile were protesting against economic inequality in the country.

In this image, two people wearing all black can be seen standing with a statue. A Reverse Image Search directed us to a Spanish news report published on November 10, 2019. The caption of the image reads, “A church was destroyed and looted by protesters in Santiago de Chile.” The same image was also carried by other media outlets in 2019 stating that the vandalised church was “Parroquia de la Asunción” in Santiago, Chile. 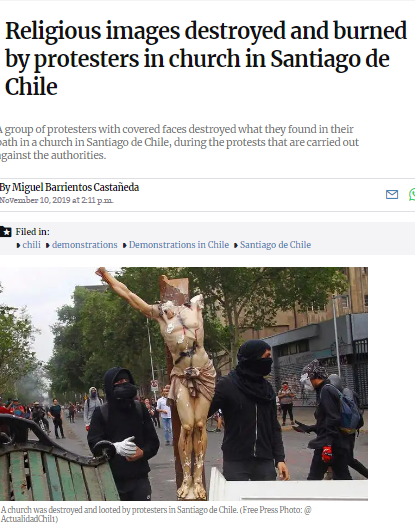 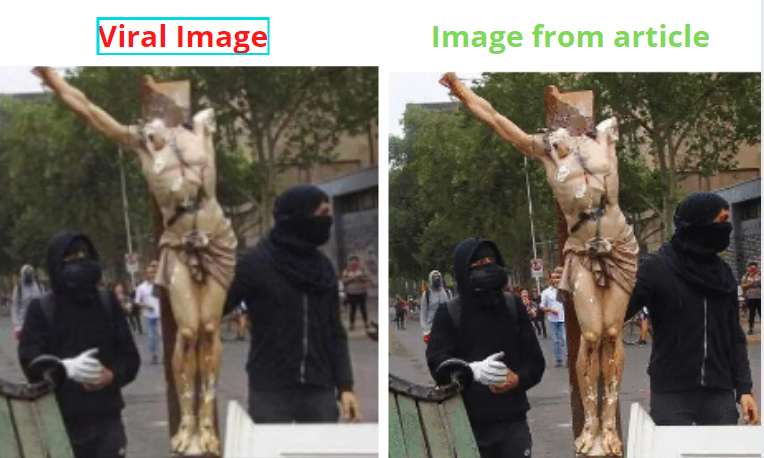 In this image, a group of people wearing all black can be seen walking with rifles in their hands. A Reverse Image Search directed us to an Instagram post uploaded on July 6, 2020. The caption of the image reads, “Yesterday, the KKK threatened protestors who planned to march for the removal of Stone Mountain’s Robert E. Lee memorial. In response, protestors armed themselves to protect one another from retaliation and marched anyway.” 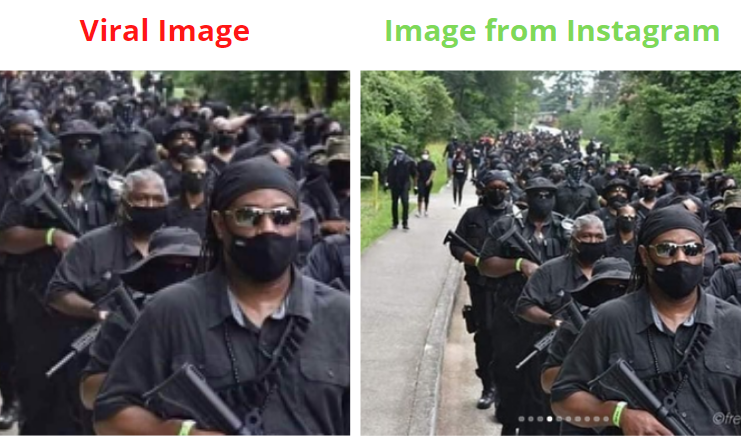 This image is a combination of a picture showing fire in front of a church and cropped version of the second image. A Reverse Image Search directed us to a news article published on November 8, 2019, that carried the viral image. The caption of the image reads, “The protesters burned the furniture in the church of La Asunción, located in the centre of Santiago de Chile.” Check a similar news article here. 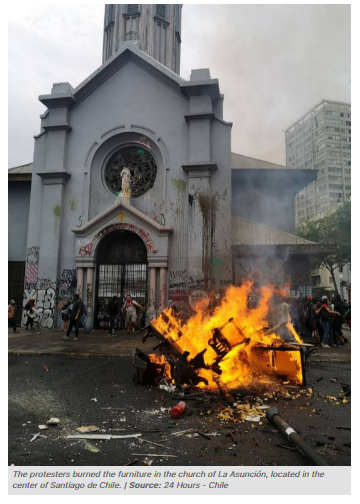 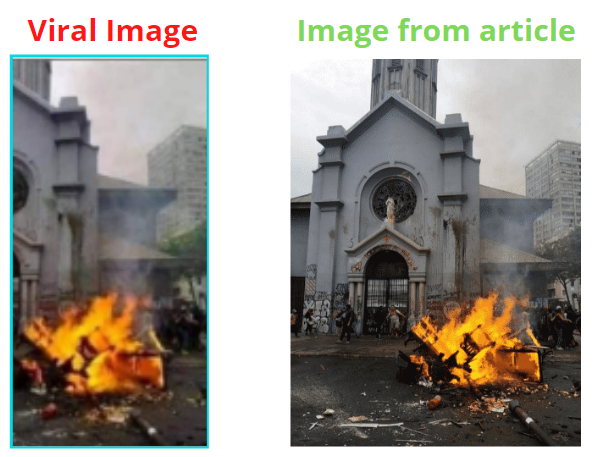 We also did a keyword search, but could not find any recent media report about members of Black Panthers attacking or destroying a church in the USA.

Thus, it can be concluded that old and unrelated images are being falsely shared as members of the Black Panthers attacking a church in the USA. Therefore, the viral claim is false.