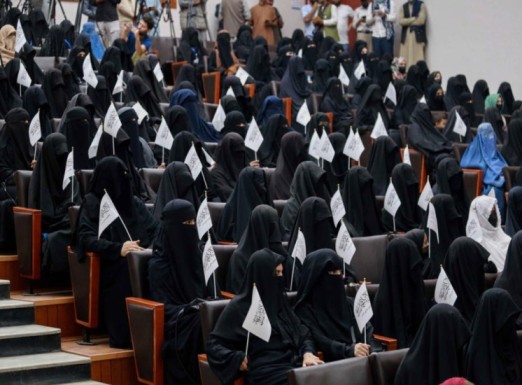 Gender segregation would be enforced in Afghan universities and that protocols were being put into place for the same, Afghanistan’s acting higher education minister said on Sunday.

Backtracking from its assurances to respect women’s rights in Afghanistan, the Taliban last month had announced a ban on co-education. Addressing a press conference, Acting minister Mawlavi Abdul Baqi Haqqani said that the outfit was looking for female teachers to teach women, Ariana News reported. If there is a shortfall, male teachers would be allowed to teach them, but female students would have to wear a veil and the class would be conducted using curtains or by using a TV screen, the group added.

“When there is really a need, men can also teach (women) but in accordance with Sharia, they (female students) should observe the veil, and there is a need for a curtain in the classroom so that the teacher can teach the students and by using some facilities such as (TV) screens or other modern devices,” Haqqani was quoted as saying by Ariana News.

Last month, Shaikh Abdulbaqi Haqqani was appointed acting minister of higher education in Afghanistan. Earlier, Taliban officials had said that there is no alternative justification for continuing co-education and the practice must be halted.

The newly appointed education minister has repeatedly said that education activities will take place according to Sharia Law. Many people have decried this move, which is set to deprive girls of higher education as major universities in the country cannot afford to provide different classes due to a dearth of resources.

According to the rights group Taliban Watch, last month private universities owners objected to the Taliban order of separating girls from boys and told the authorities in a meeting that there aren’t enough female teachers.