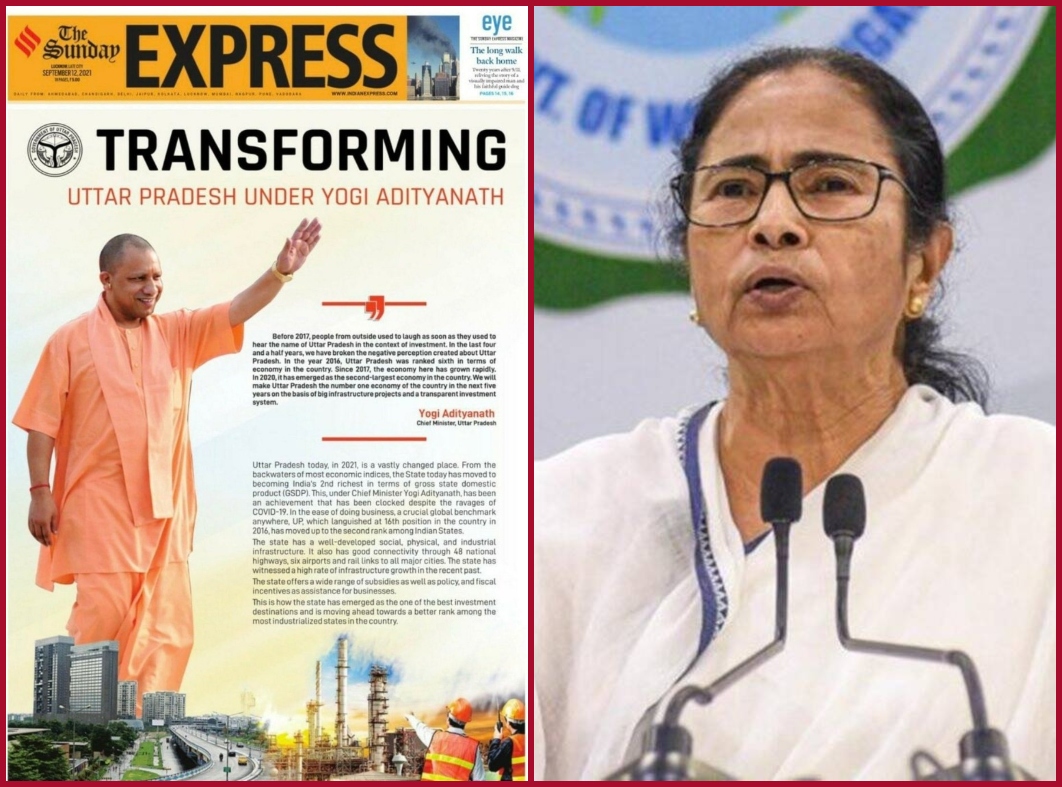 The front page advertisement of the Sunday edition of the Indian Express has taken the internet by storm. The ad showed Uttar Pradesh Chief Minister Yogi Adityanath waving in the backdrop of a photo of a flyover.

Many political leaders reacted to the newspaper’s front page:

Thuggy Yogi in his UP ads with Kolkata’s MAA flyover, our JW Marriott & our iconic yellow taxis!

Change your soul or at least your ad agency Gudduji!

P.S. Looking forward to FIRs against me in Noida now 🙂 pic.twitter.com/I7TRUMvCjO

Abhishek Banerjee, senior Trinamool leader and the nephew of Chief Minister Mamata Banerjee tweeted: “Transforming UP for Yogi Adityanath means stealing images from infrastructure seen in Bengal under Mamata Banerjee’s leadership and using them as his own!”

Transforming UP for @myogiadityanath means stealing images from infrastructure seen in Bengal under @MamataOfficial‘s leadership and using them as his own!

Looks like the ‘DOUBLE ENGINE MODEL’ has MISERABLY FAILED in BJP’s strongest state and now stands EXPOSED for all! https://t.co/h9OlnhmGPw

Targeting PM Modi, Senior leader, Mukul Roy, who returned to the TMC from the BJP after the ruling party’s victory also commented on the advertisement.

Mr. @narendramodi is so helpless to save his party that other than changing CMs, he has also had to resort to using pictures of growth & infrastructure seen under @MamataOfficial‘s leadership, as his own.#BengalModel > #BJPRuledStatesModel Mr Modi? pic.twitter.com/USNOjrq03I

Sanjay Singh who heads the Uttar Pradesh wing of the Aam Aadmi Party tweeted: “Never heard or seen such development.”

When we searched for the image, we found the same one on Shutterstock. The image description read: “Ma or Maa flyover is a flyover in Kolkata”. The image also has Kolkata’s iconic yellow taxis in it.

The Maa Flyover built-in 2015 is the newest flyover in Kolkata. At 823 metres, the longest bridge is Vidyasagar Setu and the shortest is the iconic Howrah Bridge, which is all of 450 metres.

The embarrassment is acute as sources say that at a juncture when the BJP is taking on Mamata full throttle, by using images from West Bengal in an advertisement promoting the UP CM, the newspaper has provided WB CM with enough ammunition to hit back at the Yogi government.

Sources in the UP govt say that the advertisement images were provided by the newspaper and they have taken it up strongly with the newspaper forcing them to apologize.

Indian Express on Sunday issued an apology for using a photo from Kolkata to claim Uttar Pradesh’s development in a newspaper advertisement:

A wrong image was inadvertently included in the cover collage of the advertorial on Uttar Pradesh produced by the marketing department of the newspaper. The error is deeply regretted and the image has been removed in all digital editions of the paper.