Home NM FACT CHECKER Fact Check: No, Idol Of Hindu Deity Nandi Was NOT Found During...

An image of an idol of Hindu deity Nandi is being shared on social media with a claim that it was unearthed during excavation around a mosque.

The image is being shared on Facebook with a caption in Hindi that translates to, “This is the truth of every Mazar Masjid.” 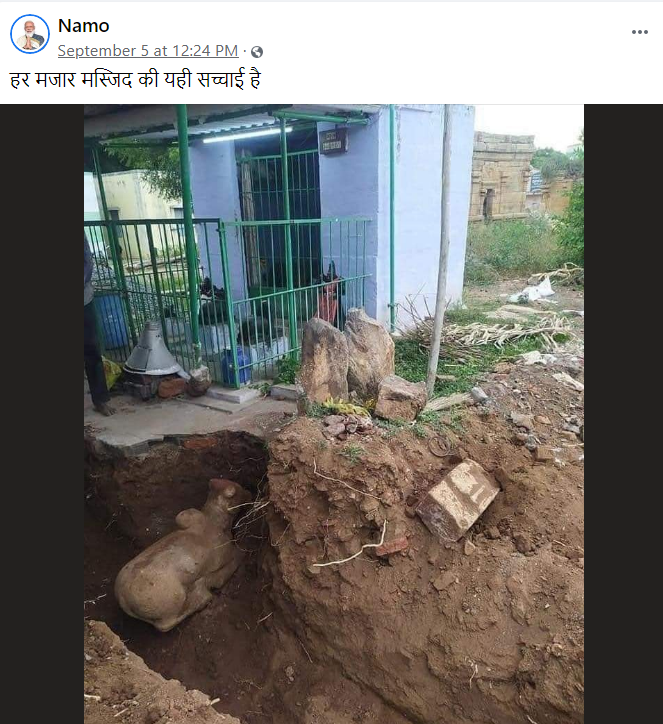 A simple Reverse Image Search directed us to a Twitter post dated September 4, 2021, which carried the same viral image. The user tweeted the image and said that during excavation in the Selandiamman temple of Mohanur in Namakkal district, a large idol of Nandi was found.

Truth may be Buried, but not Forever !! pic.twitter.com/moK4YejqOC

Searching further, we found a Facebook post which uploaded the same viral image on September 1, 2021, with a caption that can be translated to, “Namakkal District, Mohanur Circle. Ariyur. Village. Arulmigu Sellandiamman Temple, Above Nandi statue was found while plucking the Vani of Madhileswar. Temple near Sivalayam in Ariyur. Thiruchitrambalam.” Namakkal is located in Tamil Nadu.

We could also find a news article dated September 2, 2021, by ‘Dinamalar’ that carried the viral image. According to the article, renovation work is going on in the Selandiamman temple. An old idol of Nandi was found during excavation around the temple. Temple officials gave this information to the Revenue department. Revenue Department officials came and took the idol with them.

At present, the Archaeological Department is examining this statue and it is kept in the Salem Museum. You can see a similar tweet here.

Tamil news website Vikatan also published the news of the Nandi idol being found during an excavation in a temple in Namakkal.

More searches led us to a video news report that reported the same incident. The video description translates to, “Namakkal: Discovery of 1000-year-old Nandi statue.”

Thus, it is evident from the above information that the old Nandi idol found during the excavation of a temple in Namakkal, Tamil Nadu, is being falsely shared with a misleading claim that it was unearthed during excavation around a mosque. Therefore, the viral claim is misleading.