Home Big Story The Road From Kabul, What Lies Ahead 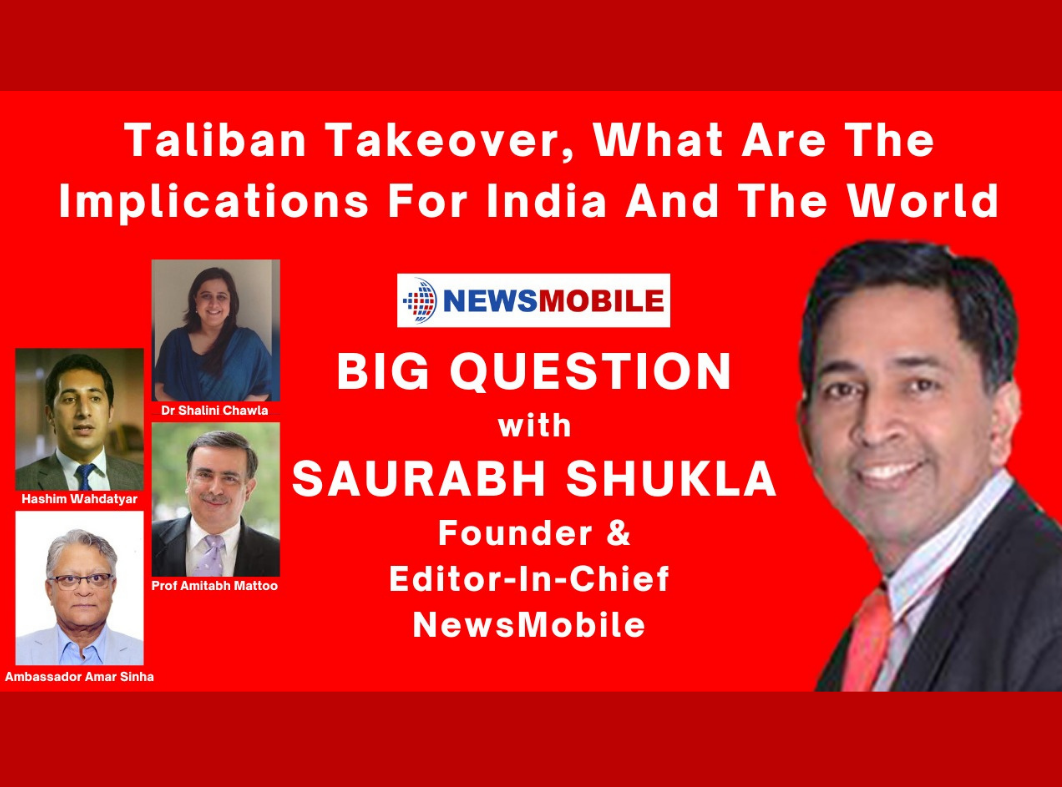 NewsMobile Editor-in-chief Saurabh Shukla moderated a special panel to discuss the Taliban takeover. In the esteemed panel, there were:

Excerpts from the discussion

Saurabh Shukla: What do you feel about what’s happening in your country, the world has seen it, the democracies across the globe are concerned, how do you evaluate the situation and where do you see the future of Afghanistan? 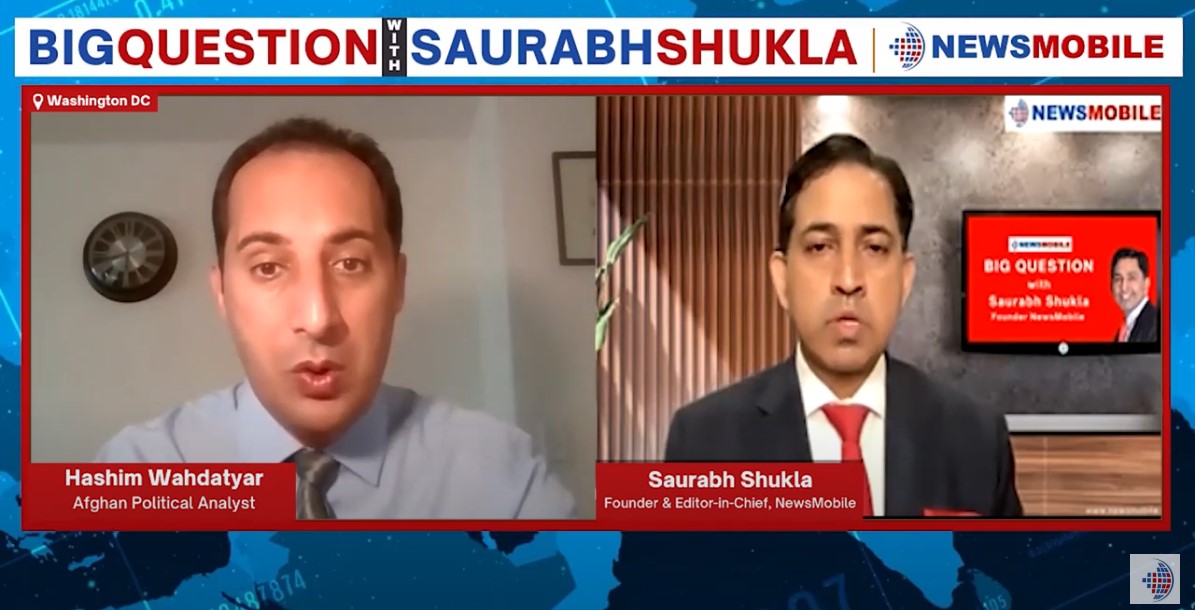 Hashim Wahdatyar:  The success of the Taliban over Afghanistan, it is a failure of the international community and politicians. The Taliban has taken the country years back, the destabilization, and to take responsibility, the Taliban has to prove that they have changed.

Taliban has been unfortunately a feller of the international community, a feller of politicians, a feller of regional intervention in Afghanistan and a success of Taliban, a success of their insurgence affiliated groups means, Afghanistan is taken back 50 to 100 years, unfortunately, this will fuel the destabilization of the region and beyond because of the close relationships with the insurgence groups, terrorist groups in Afghanistan, however, there is a very small window of hope, that is all the responsibilities is on the shoulder of the Taliban now, now the Taliban must prove that they are changed, the Taliban must prove that there is no link with Islamabad, we will wait and see how the Taliban will behave.

Saurabh Shukla: Ambassador Sinha, you were somebody who really built the relationship, when you were the Ambassador, a lot of building blocks were created for our development and our goodwill diplomacy, are you really alarmed and shocked at the manner in which the take over has been done by Taliban, where do you see India’s role from here on?

Amar Sinha: Yes, I shared the sense of disbelief and alarm for what happened, and I don’t think anybody would have thought that one would see literally a demise of a nation’ state and that too which was so much invested from 20 years and it will crumble so quickly, the alarm was because everybody knows what Taliban’s first regime as like, that they don’t have any vision for governance, all they knew was how to grab power through violence, the alternate vision of running a nation, unfortunately, they neither have the experience nor the vision and importantly they don’t even have the money.

Amitabh Mattoo: I think, one short term and one long term impact, first of all, as Hashim Sahab said that the Taliban have to prove that is not what they were in 1.0, that they are not the function of the ISIS, that they are not as crazy as they were last time, he hoped that they would have changed, I am unfortunately for the Taliban, I’m a skeptic and I think they will not prove that have changed, that means for India, one, despite your engagement if they are going to be a zealous force that is not ready to govern, but really wants to spread their tentacles across the continent, what you will witness that how much India tries to engage or appease, there will be no grim. On Kashmir, it’s the danger of the ideology of the Taliban, which is an ideology of intolerance, extremism, use of violence.

Saurabh Shukla: Dr. Shalini Chawla, how do you see China and Pakistan making use of the Taliban being there in Afghanistan to actually create a devious coalition against India?

Shalini Chawla: Pakistan.. definitely we have seen the engagement, the Taliban takeover has happened with the consistent support from Pakistan. It will continue to support and guide the Taliban and also would be keen that the Taliban gain wider international recognition. And as far as China is concerned, it will be welcomed in Afghanistan, it wants to definitely engage there, Taliban will welcome money and investment coming from China. China wants to expand itself and Pakistan will be a major fa

Saurabh Shukla: Coming back to Mr. Hashim, what are your expectations as an Afghan and a political analyst, from a democracy like India and the US, what can they do at this stage?

Hashim Wahdatyar: Let me clear to you that the Taliban hates democracy, democracy is something that they think is a US formula brought into Afghanistan, they have different definitions of democracy, they prefer and they want for Afghanistan is Sharia law.

Saurabh Shukla: Ambassador Sinha, what are India’s options? Do you think that India can actually draw a red line to the Taliban through some of its friends in the Arab world?

Amar Sinha: The world gave up on the red lines as far as the Taliban is concerned, so new red lines won’t work, we have a bad hand right now, another problem is most of our friends have left Afghanistan. There are only a few respected leaders but still in negotiations with Taliban but I think that negotiations are not to change Taliban but to make sure that the government is inclusive.

Saurabh Shukla: Prof. Mattoo, do you see any role of the UN because a lot of people are saying that in a scenario where none of the counties really want to get in and try to stabilize the situation, do you think the UN could play some role finally at someplace?

Amar Sinha: The UN umbrella given by the majors, Russia, USA, Britain to Afghanistan will be a great stretch. UN is only is function of what even the Security Council can decide, even the Security Council under the Presidentship of Foreign Minister today has issued a statement against terrorism. Russia, Britain, America, deeply implicated with the Taliban, if you think that they will offer a UN umbrella to Afghanistan, then it’s a long stretch.

Saurabh Shukla: Dr.Chawla again, what India should do internally? what should India be doing to that front to make sure especially in some of the vulnerable areas, because Pakistan is certainly going to exploit the situation?

Shalini Chawla: There are three or four factors that are of deep concern to India, there will be a spillover impact of the overall jihadi network, over a long period. I think that ideological impact is something India needs to keep a watch and, secondly is Pakistan is going to strengthen its propaganda and action on the India front. On the other side, we are welcoming Afghan refugees and we have open the e-visa.

The last segment was rapid-fire, in which the Editor-In-Chief Saurabh Shukla asked three things which the panel thinks about the scenario mapping on Afghanistan in the next year.
Hashim Wahdatyar stated internal damage, regional damage, and global damage. Amar Sinha stated either a fractured government in Kabul or a civil war, second is China still waiting, and watching third is that the US will be regretting in one year from now. Amitabh Mattoo said civil war and instability in Afghanistan, second will be that we will realize that the real problem is Pakistan and third that Talibanis will be impacting us. Shalini Chawla stated that there is going to be a fractured government, second according to her Pakistan and China are going to be the most important players and third is that the various terrorist groups are going to intensify their actions in their respective homes.

Editor-In-Chief Saurabh Shukla ended the discussion here by stating that Afghanistan is actually in a danger under the Taliban, can be a global epicenter of terrorism.