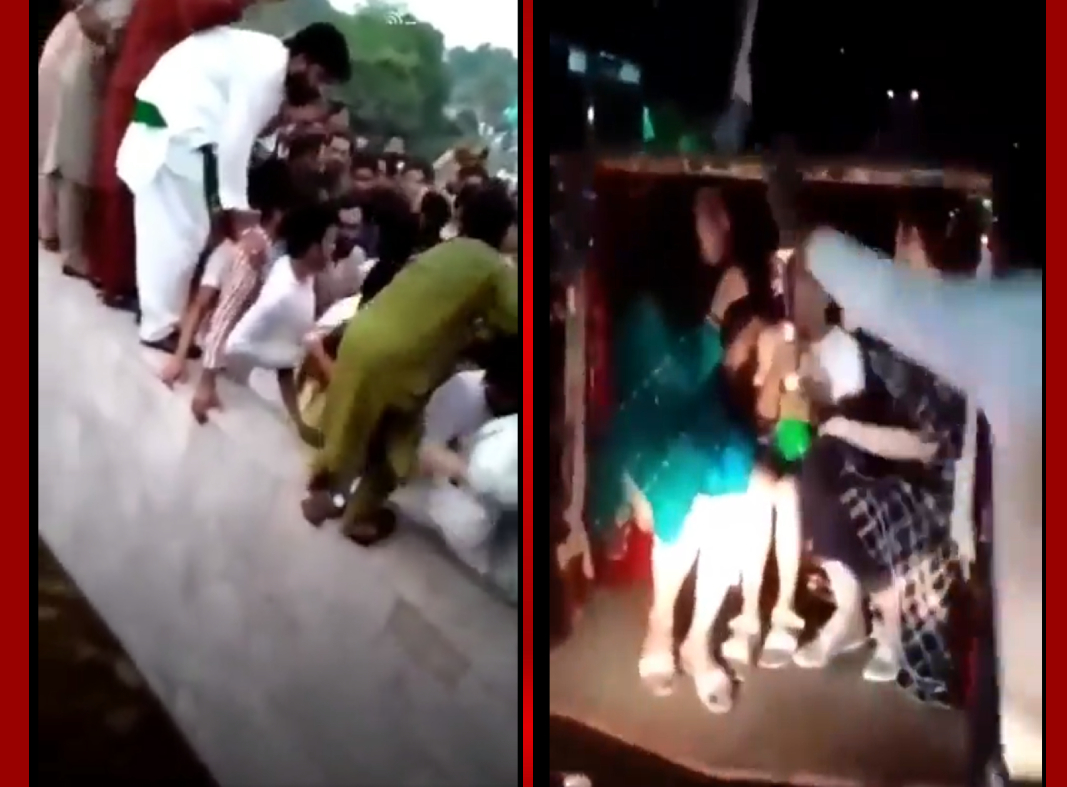 A recent horrific video of a woman being assaulted by hordes of men on August 14 in Lahore went viral on social media leaving viewers shaken and evoking harsh condemnation from netizens. Now, another video has surfaced apparently from the same day of another woman being the subject of an assault.

In the video, which has been shared on social media, two women are seen traveling in an open rickshaw on a busy road when a man jumps onto the footboard of the vehicle and apparently kisses her on the cheek.

Here’s the video shared by a social media user:

Another #lahoreincident 😭
These I’ll mannered people must be punished who are ruining peace of our Society 💔 pic.twitter.com/POzOdF3Jtc

Two women, with a child seated between them at the back of a rickshaw somewhere in a busy street in Pakistan (many on social media said it was Lahore), can be seen in the video clip, according to The News International.

The women are visibly disturbed at the sight of a couple of motorcyclists hounding the rickshaw, catcalling and leering at the women. One man jumps onto the rickshaw, out of nowhere, and forcibly “kisses” the woman. Startled, she and the woman beside her scream but no one intervenes, The News International reported.

Furthermore, in the video, one of the women takes her slipper off and threatens to hit a motorcyclist with it. The woman who was harassed, at one point in time, gets extremely upset and tries to leave the rickshaw in despair but is stopped from doing so by her companion.

The rickshaw appears to be surrounded by men in cars and motorcycles carrying the national flag, which indicates that the incident took place during Independence Day celebrations, it reported.

Previously, a TikToker was brutally attacked by hordes of men in Lahore.

Both videos have triggered anger and uproar on social media, with many people calling for the government to take strict action against sexual harassers.

Here is how netizens are reacting to these incidents:

Shocking beyond imagination!
400 men groping,beating & tearing cloth of 1 tiktoker girl in #MinarePakistan
Girl screaming for help.. Azaan going on in the background
These Vultures are no less than Talibanis
This is Naya Pakistan..Shameful pic.twitter.com/PBYWqAWvon

Another #lahoreincident 😭
These I’ll mannered people must be punished who are ruining peace of our Society 💔 pic.twitter.com/POzOdF3Jtc

‘I was stripped and my clothes were torn apart’: Pakistan woman TikToker on “brutal assault” by hundreds of men ⁦@Malala⁩ #pakistan #humanrights ⁦@UNHumanRights⁩ ⁦@rihanna⁩ ⁦@ImranKhanPTI⁩ #women this is how Pak treat women https://t.co/QB3PcC827D

This is outrageous incident. Seriously we as a nation must stand against these beasts & who so ever does so must be taken to task. Govt must open eyes to clampdown on such abnormal activities. This is enough! 😡#lahoreincident @alwaystalat@ImranKhanPTI#اقرارالحسن_کو_گرفتار_کرو pic.twitter.com/1AmFIzyHLY

posted this during the motorway incident have to bring this back #minarepakistan #lahoreincident #ayesha pic.twitter.com/RKZM9YCBaM

400men, 800 eyes. No eye felt shame, no hand came forward to protect. No heart felt fear of Allah. No soul got shattered. No tongue spoke a word to their mate. What A shame they bought to every man!! #minarepakistan #AyeshaAkram pic.twitter.com/YujILewa2e