On the occasion of 75th Independence Day, Prime Minister Narendra Modi on Sunday hoisted the national flag and addressed the nation from the ramparts of the Red Fort in New Delhi.

It may be recalled that PM Modi had launched ‘Azadi Ka Amrit Mahotsav’ from Sabarmati Ashram at Ahmedabad in Gujarat in March 2021 to celebrate 75 years of India’s Independence. The celebrations will continue till August 15, 2023.

PM Modi addressed the nation from the ramparts of the Red Fort. Here are the key takeaways from his speech:

Prime Minister Narendra Modi greeted the nation on the occasion of 75th Independence Day and said it is the day to remember India’s great freedom fighters.

Addressing the nation from Red Fort, the Prime Minister said on this day, the country is remembering every person who contributed to the freedom struggle, as the country is indebted to all of them. “I would like to begin by conveying greetings on this special occasion of Independence Day. This is a day to remember our great freedom fighters… Amrit Mahotsav of Independence, Happy 75th Independence Day to all of you and to all those who love India, love democracy all over the world,” said the Prime Minister.

“Be it Nehru ji, the first Prime Minister of India, Sardar Patel, who turned the country into a united nation or Babasaheb Ambedkar, who showed India the way to the future, the country is remembering every such personality, the country is indebted to all of them,” He added. 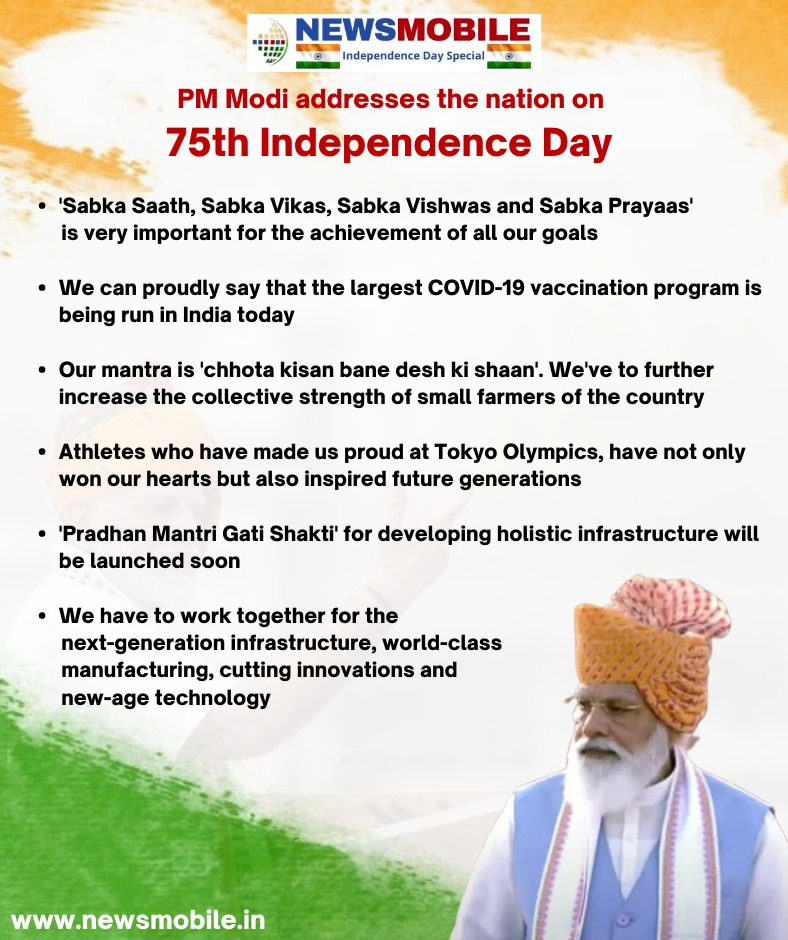 Addressing the nation, the PM said “‘Sabka Saath, Sabka Vikas, Sabka Vishwas and Sabka Prayaas’ is very important for the achievement of all our goals.” “There comes a time in the development journey of every country, when that country redefines itself, moves forward with new resolutions. Today that time has come in India’s development journey…Starting from here, the journey of the next 25 years is the ‘Amrit’ of the creation of a new India. The fulfillment of our resolves in this ‘Amrit Kaal’ will take us till 100 years of independence,” said the Prime Minister.

“That is why we have to fulfill all our resolutions by doing hard work and culmination of valor. Today I am calling from the Red Fort – Sabka Saath – Sabka Vikas – Sabka Vishwa and Sabka Prayaas, as everyone’s efforts are very important for the achievement of our every goal,” he noted.

PM Modi said that it is high time when the country needs to apply scientific research and suggestions to the agriculture sector to provide food security to the nation and to increase food production.

The Prime Minister also said that the country must increase the collective power of small farmers and make them the nation’s pride. Addressing the nation from the Red Fort in the national capital, the Prime Minister said: “It is time we apply scientific research and suggestions in our agriculture sector. We need to reap all its benefits. It will not just provide food security to the nation, but will also increase food produce.”

“Over 80 per cent of the farmers in the country owns less than 2 hectare land. Now the decisions are being taken keeping these small farmers in mind. The Kisan Samman Nidhi Yojana takes care of the small expenses of the small farmers. More than Rs 1.5 lakh crores have been deposited directly to the bank accounts of over10 crore farmer families so far,” PM Modi said. 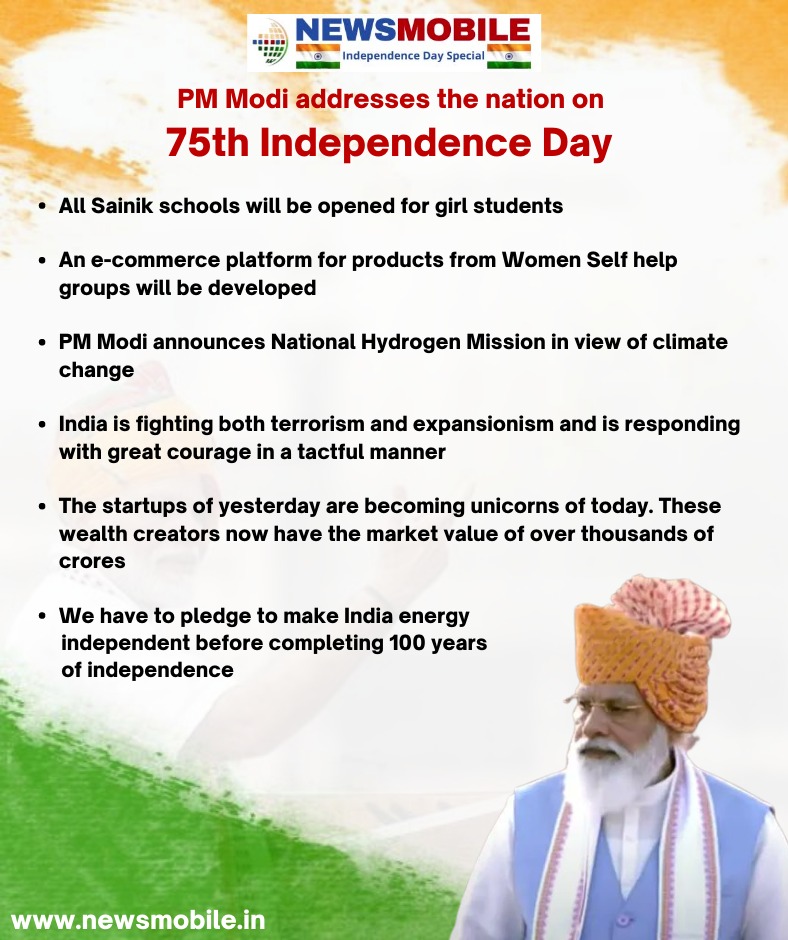 Largest COVID19 vaccination program is being run in India: PM

During COVID, our doctors, nurses, paramedical staff, sanitation workers, scientists who were developing vaccines & crores of citizens who were working with a sense of service -all those who devoted every moment to serve others in this period, deserve our appreciation

Indians have fought this battle (COVID) with a lot of patience. We had many challenges but we worked with extraordinary pace in every area. It’s a result of strength of our industrialists & scientists, that today India doesn’t need to depend on any other nation for vaccines.

We can proudly say that the largest COVID19 vaccination program is being run in India today. More than 54 crore people have received vaccine doses so far.

“Today, I am announcing the National Hydrogen Mission in view of climate change. We have to make India a hub for production and export of Green Hydrogen.”

Thirty-two Olympic winners, including javelin thrower Subedar Neeraj Chopra, India’s first-ever Gold Medallist in track and field, along with two officials of Sports Authority of India (SAI) have been invited to participate in the 75th Independence Day celebrations at the Red Fort on Sunday.

Around 240 Olympians, support staff, and SAI and sports federation officials have also been invited to grace the Gyan Path in front of the Ramparts. In Tokyo, India recorded its best-ever medal haul in the recently concluded Olympics by bagging a total of seven medals – one Gold, two silver, and four bronze.