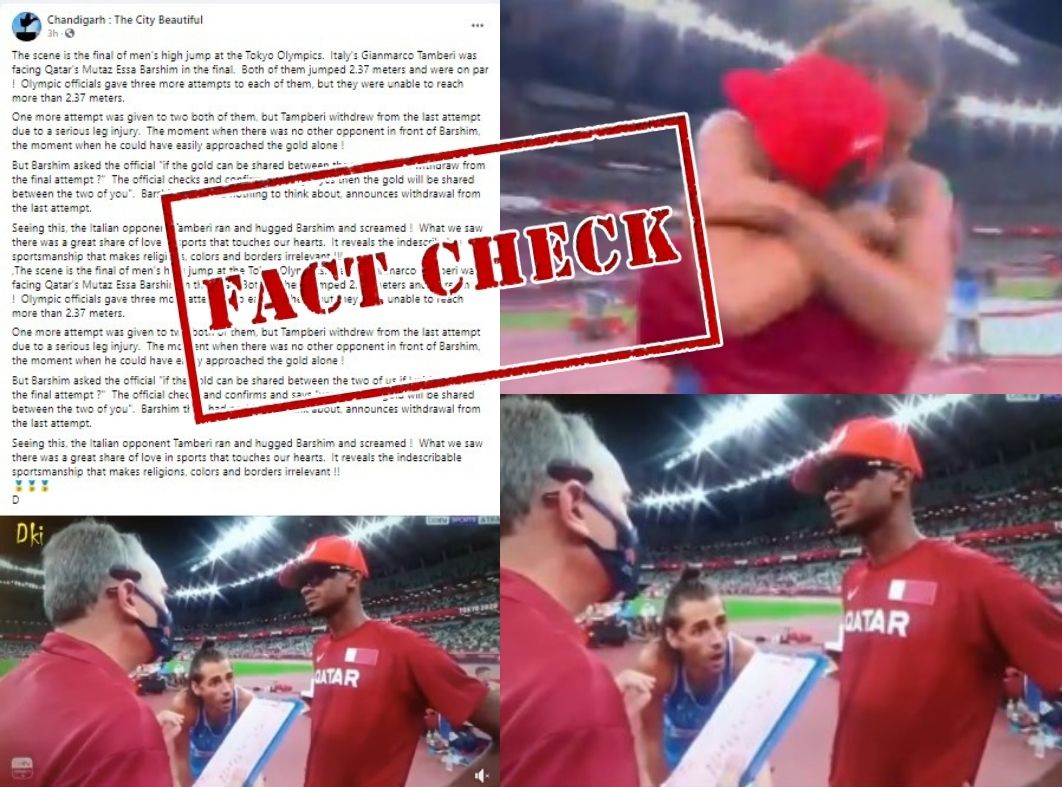 In one of the rarest moments in Olympics history, Qatar’s Mutaz Barshim and Italy’s Gianmarco Tamberi shared an Olympic athletics gold in the high jump category in Tokyo 2020. Following this, a video clip showing both the olympians has surfaced on social media platforms claiming that the Italian athlete withdrew from the final jump due to an injury and that Qatar’s Barshim could have easily won the gold alone. However, he shared it with Tamberi.

The video is being shared on Facebook with a caption, “The scene is the final of men’s high jump at the Tokyo Olympics. Italy’s Gianmarco Tamberi was facing Qatar’s Mutaz Essa Barshim in the final. Both of them jumped 2.37 meters and were on par ! Olympic officials gave three more attempts to each of them, but they were unable to reach more than 2.37 meters. One more attempt was given to two both of them, but Tampberi withdrew from the last attempt due to a serious leg injury. The moment when there was no other opponent in front of Barshim, the moment when he could have easily approached the gold alone ! But Barshim asked the official “if the gold can be shared between the two of us if I withdraw from the final attempt ?” The official checks and confirms and says “yes then the gold will be shared between the two of you”. Barshim then had nothing to think about, announces withdrawal from the last attempt. Seeing this, the Italian opponent Tamberi ran and hugged Barshim and screamed ! What we saw there was a great share of love in sports that touches our hearts. It reveals the indescribable sportsmanship that makes religions, colors and borders irrelevant !!!” 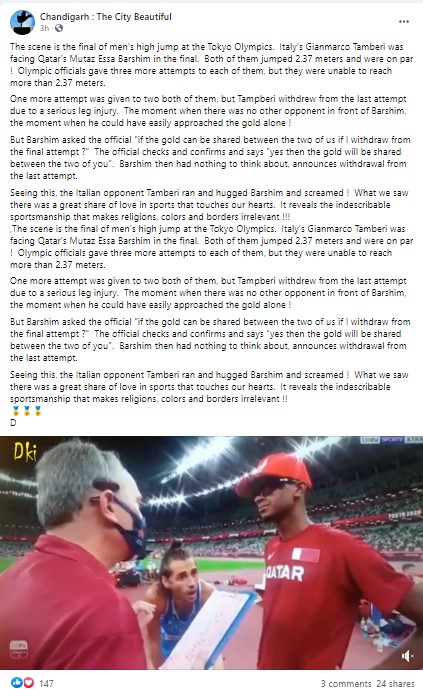 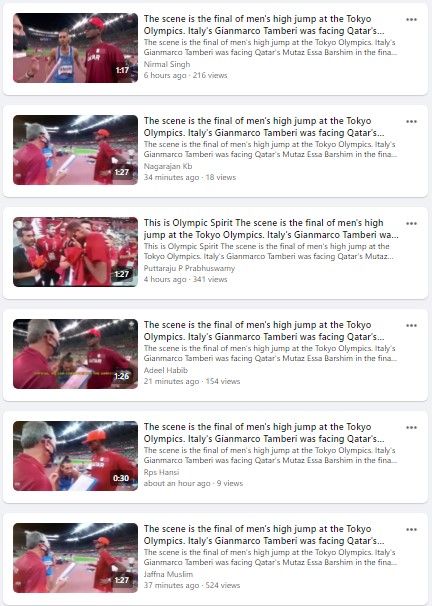 NewsMobile fact-checked the viral post and found the claim shared with it to be misleading.

What happened at the match?

According to the reports published in The Guardian and CBS News, Qatar’s Mutaz-Essa Barshim and Italy’s Gianmarco Tamberi both had high jumps of 2.37 meters. They each attempted to beat that and clear 2.39 meters and failed on their first try.

After three failures each at that height, an Olympic official first offered them a jump-off to decide the winner. To which Barshim asked, “Can we have two golds?”

The official replied “it is possible” to share a gold medal, and hence, both the players mutually decided to share the gold medal.

Claim: Italy’s Gianmarco Tamberi withdrew from the last attempt due to a serious leg injury.

Fact: The claim is false

Gianmarco Tamberi was injured in 2016, 6 weeks before the Rio Olympics and not recently or during the Tokyo Olympics. Back then, he ruptured the tendons in his ankle, moments after setting the Italian national record of 2.39m at the Monaco Diamond League and left the stadium on a stretcher.

Also, contrary to the claim made in the viral post, Tamberi did not withdraw from the ‘last attempt’ or a ‘jump off’ that was offered by the Olympic official to decide the winner.

Moreover, one can clearly see in the viral video that nowhere did Tamberi suggest that he would withdraw from the ‘jump off.’

Claim 2: Barshim could have easily approached the gold alone

The claim that Tamberi did not withdraw from the final decider ‘jump off’ is false, which itself renders the second claim false.

However, even if the player would have gone for a jump-off, world athletics rules had to be followed in the event of a tie to decide the winner.

According to the FoxSports report, the rules dictate, “The jump-off will start at the next greater height. Each jumper has one attempt and the bar is lowered and raised until one jumper succeeds at one height.”

“Under section 26.8.4 of the Sport’s Technical Rules, however, is the crucial wording that allowed the gold to be shared,” reads an excerpt of the report.

The rule says that a jump-off should be conducted to determine the winner, “unless otherwise decided, either in advance according to the regulations applying to the competition, or during the competition but before the start of the event by the Technical Delegate(s) or the Referee”.

“If no jump-off is carried out, including where the relevant athletes at any stage decide not to jump further, the tie for first place shall remain.”

In a tweet following the event, Channel 7 track and field commentator and former Olympian David Culbert said, “They changed the rules a few years ago so athletes can decide no jump-off.”

They changed the rules a few years ago so athletes can decide no jump off. Share the gold. They both deserve it. Clear to 2.37. A jump off would have been an anti climax

How did the players react?

The men sobbed and embraced each other after winning the gold together. “I look at him, he looks at me, and we know it. We just look at each other and we know, that is it, it is done. There is no need,” Barshim told reporters after the event, according to Reuters.

The pair also said that they decided to share the gold medal to prove that winning isn’t always about mentally breaking down your competition. Tamberi said it was significant that Barshim was the one he tied with.

“Not because I don’t respect the others. I respect all the high jumpers that were there,” Tamberi told reporters, according to CBS Sports. “But Mutaz passed through the same problem as me, and I know what it means to come back from that injury. I know how frustrating it is.”

In conclusion, we can state that the viral post is being shared with a misleading claim.