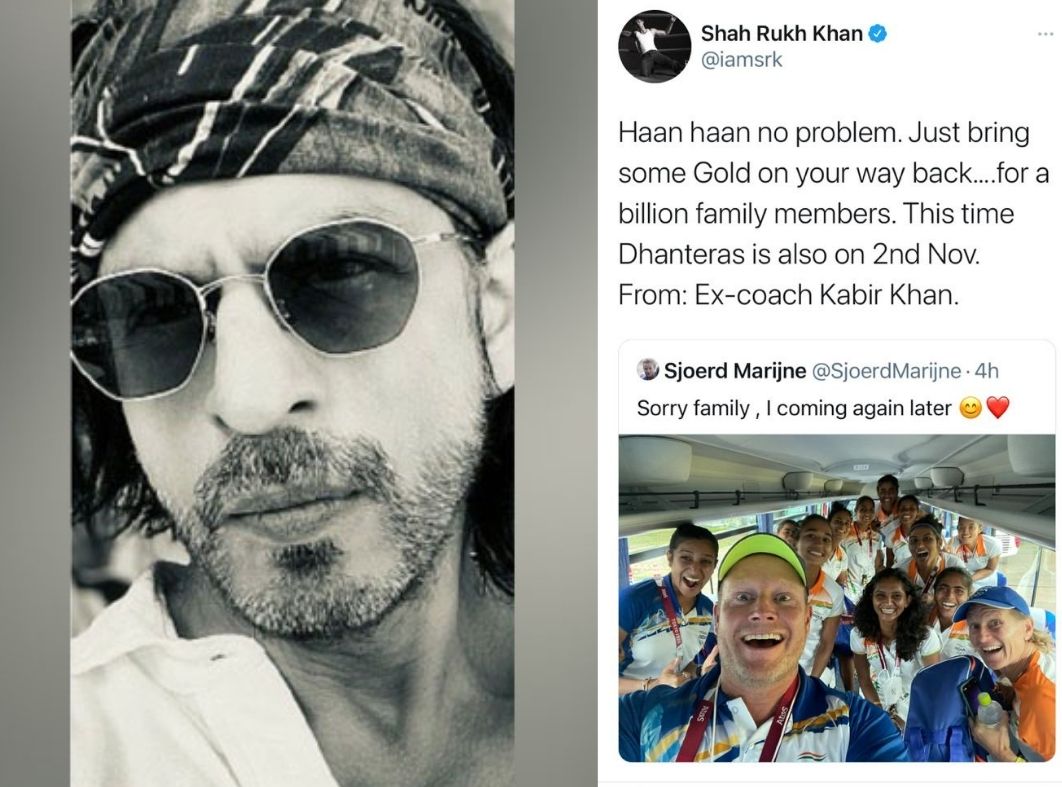 After the Indian women’s hockey team made history by defeating Australia to book their place in the semi-final for the first time in the Olympics, superstar Shah Rukh Khan took to his Twitter to congratulate the girls in his unique way.

On Monday, Shah Rukh addressed himself as Kabir Khan while giving his best wishes to the Indian women’s hockey team and their coach Sjoerd Marjine. Of course, SRK didn’t forget to add a dash of his humour.

“… Just bring some Gold on your way back….for a billion family members. This time Dhanteras is also on 2nd Nov. From: Ex-coach Kabir Khan,” SRK wrote.

Haan haan no problem. Just bring some Gold on your way back….for a billion family members. This time Dhanteras is also on 2nd Nov. From: Ex-coach Kabir Khan. https://t.co/QcnqbtLVGX

For the unversed, SRK played an important role in popularising hockey in the country years ago when he played the iconic role of a hockey coach, Kabir Khan in the hit movie ‘Chak De! India’. Today’s match win is akin to a real version of the film, wherein makers also showed the defeat of the Australian women’s hockey team at the hands of the Indian women’s hockey team.

Responding to SRK’s post on Twitter, Marjine thanked the former for his support.
“Thank you for all the support and love. We will give everything again. From: The Real Coach,” Marjine tweeted.

Thank you for all the support and love. We will give everything again.
From: The Real Coach. 😉 https://t.co/TpKTMuFLxt

Actors who played the role of hockey players in ‘Chak De! India’ also congratulated the real-life Indian women’s hockey team on their win.

Actor Vidya Malavade, who essayed the role of the team captain, took to Instagram and shared a picture of the reel vs real team.

“My phone hasn’t stopped ringing since morning and I was just a part of the reel ..This .. These women are the real deal ..such pride .. such grit .. so much power.. Team INDIA Onwards and Upwards ladies ..#JAIHIND Here’s wishing Rani and her team all the very very best .. Go conquer girls.” she wrote.

Coming back to the match, it was Gurjit Kaur’s goal in the second quarter that helped the Indian women’s hockey team earn a place in the Tokyo Olympics semi-final.