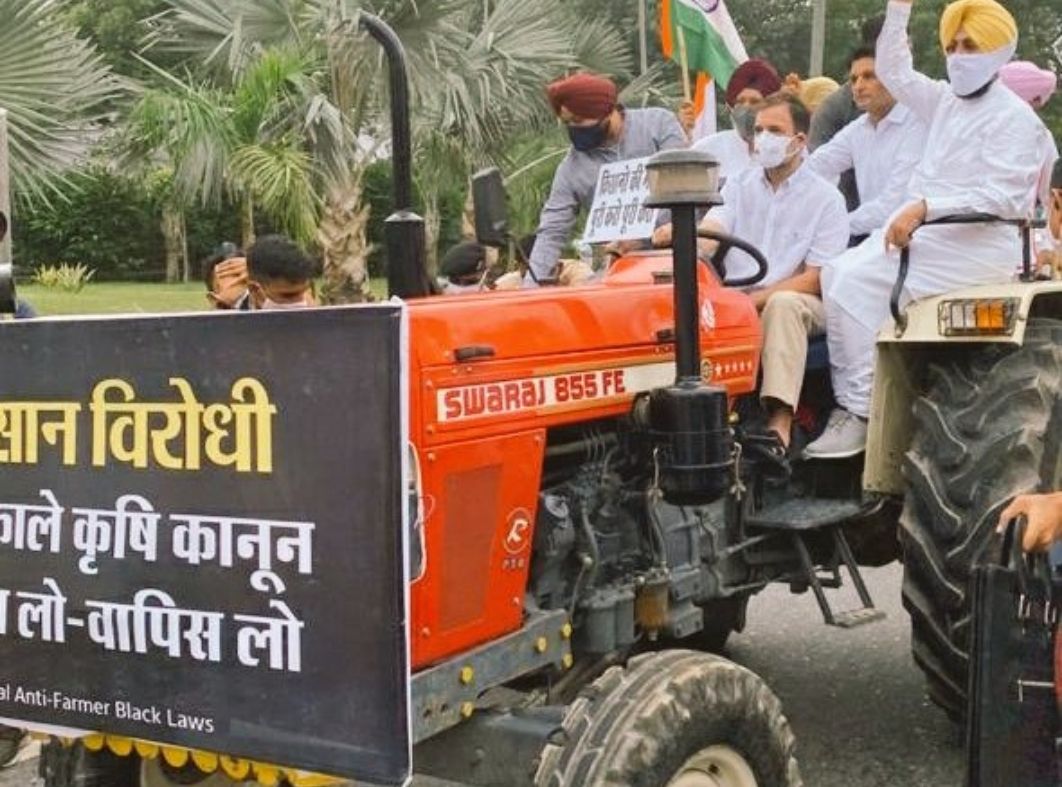 Congress leader Rahul Gandhi on Monday drove a tractor to reach Parliament in protest against the three farm laws. Extending support to farmers who have been agitating against the new agricultural laws, the Wayanad MP told media persons, “I have brought farmers’ message to Parliament. They (The government) are suppressing the voices of farmers and not letting a discussion take place in Parliament. They will have to repeal these black laws. The entire country knows these laws favour 2-3 big businessmen.”

“As per the government, farmers are very happy and those (protesting farmers) sitting outside are terrorists. But in reality, farmers’ rights are being snatched away,” he added.

As per Govt, farmers are very happy and those (protesting farmers) sitting outside are terrorists. But in reality, farmers' rights are being snatched away: Congress leader Rahul Gandhi after driving a tractor to Parliament pic.twitter.com/GGee9POAvC

Gandhi was accompanied by Congress MPs, who raised slogans against the farm laws and the Centre.
Farmers have been protesting on the different borders of the national capital since November 26 last year against the three newly enacted farm laws: Farmers’ Produce Trade and Commerce (Promotion and Facilitation) Act, 2020; the Farmers Empowerment and Protection) Agreement on Price Assurance and farm Services Act 2020 and the Essential Commodities (Amendment) Act, 2020. Farmer leaders and the Centre have held several rounds of talks but the impasse remains.

On Sunday, while calling the farmers of Jind (Haryana) revolutionaries, Bharatiya Kisan Union (BKU) leader Rakesh Tikait had hailed the decision of carrying out a tractor parade in protest against the Centre’s farm laws on Independence Day.

Addressing media near a protest site in Delhi, Tikait had said carrying out a tractor rally is not a ‘bad thing’, and driving tractors with a national flag increases the spirit of nationalism in people.

The Opposition has alleged that names of several Indian politicians, journalists, lawyers, and activists have appeared on the leaked list of potential targets for surveillance by an unidentified agency using Pegasus spyware. This comes following reports published in The Wire.