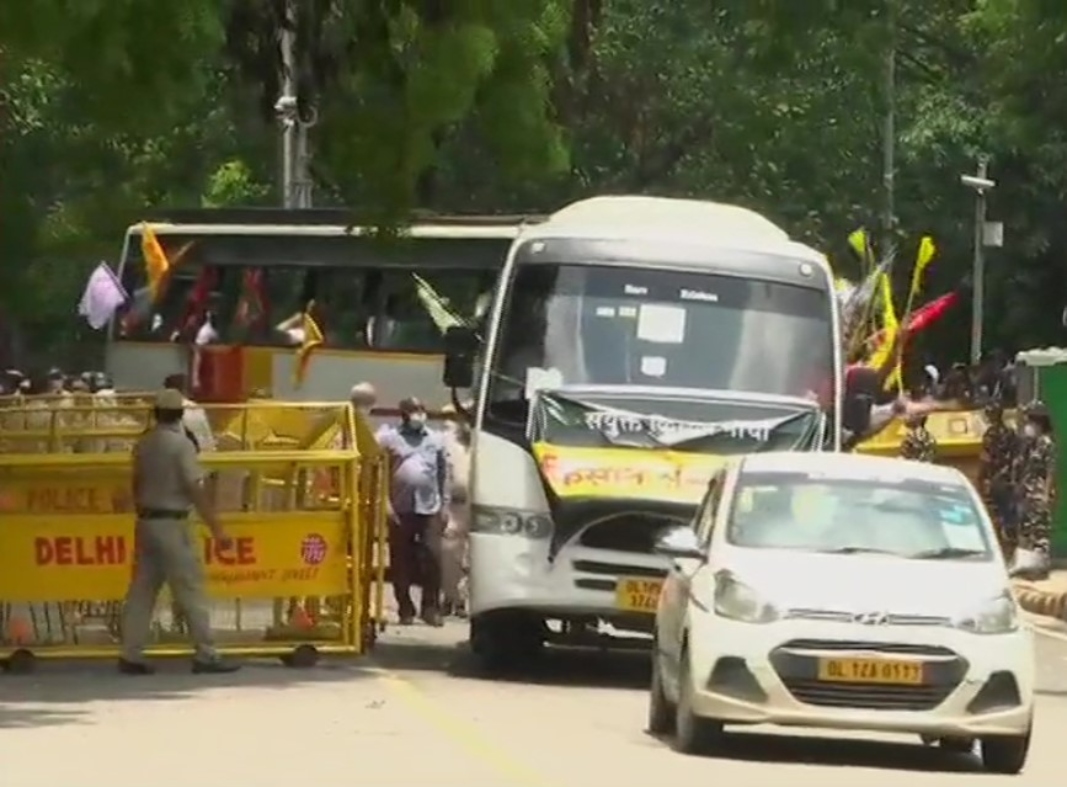 Amid the ongoing Monsoon Session of Parliament, farmers are holding a protest at Jantar Mantar on Thursday, demanding the scrapping of new agricultural laws.

Delhi Police on Wednesday permitted farmers to hold a demonstration at Jantar Mantar demanding the scrapping of agricultural laws after they took an undertaking from them that the farmers would not march towards Parliament which is currently in session.

Security has been tightened at the Singhu border where farmers will gather today from different protest sites and head towards Jantar Mantar.

Farmers have been permitted to protest at Jantar Mantar with limited numbers not exceeding 200 persons for Samyukt Kisan Morcha (SKM) and six persons for Kisan Mazdoor Sangharsh Committee (KMSC) from 11 am upto 5 pm daily.

The Delhi government has also granted permission to farmers to hold protests, subject to following all COVID protocols. In a statement issued late on Wednesday, Delhi Police said the farmers will be escorted by police to the designated protest site at Jantar Mantar from the Singhu border in buses. Only those farmers who have ID cards will be permitted at the protest site and at the end of the day around 5 pm, Police will escort the farmers on the buses as they return to the Singhu border.

Farmers have also been advised not to take out any march in view of COVID restrictions and they have been asked to observe COVID appropriate behaviour and social distancing. “Delhi Police has put in place extensive arrangements to ensure that the protest programme remains peaceful,” according to the statement.

“After multiple rounds of negotiations with farmers bodies SKM and KMSC, and on being assured in writing that they would remain peaceful and with the approval of DDMA, the farmers have been permitted to protest at Jantar Mantar with limited numbers not exceeding 200 persons for SKM and six persons for KMSC from 11 am upto 5 pm daily,” the Delhi Police said in its statement.

Security personnel deployed & barricades have been put up at the spot pic.twitter.com/KIKJtmAzjO

Meanwhile, the Delhi Disaster Management Authority (DDMA), which is under the Delhi government has allowed farmers to stage the protest between 11 am to 5 pm from July 22 to August 9, subject to the participation of a maximum of 200 protesters per day, according to sources.

Farmer leader Darshan Pal Singh told ANI: “A group of 200 farmers will go in four buses to hold ‘Kisan Sansad’ at Parliament Street where we will discuss the agrarian crisis the three farm laws and MSP. We have constituted a six-member steering committee which will include three members from Punjab.”

Apart from the main highway all routes leading to Delhi have been put under surveillance and are being monitored round the clock. Police said they are not taking any chances after what happened on January 26 this year and have made appropriate arrangements. Delhi had witnessed violent protests during a tractor parade on Republic Day as thousands of agitators clashed with the police.

Farmers have been protesting on the different borders of the national capital since November 26 last year against the three newly enacted farm laws: Farmers’ Produce Trade and Commerce (Promotion and Facilitation) Act, 2020; the Farmers Empowerment and Protection) Agreement on Price Assurance and farm Services Act 2020 and the Essential Commodities (Amendment) Act, 2020.

So far, several rounds of talks have been held between the Centre and farmer leaders to break the deadlock between the two parties.