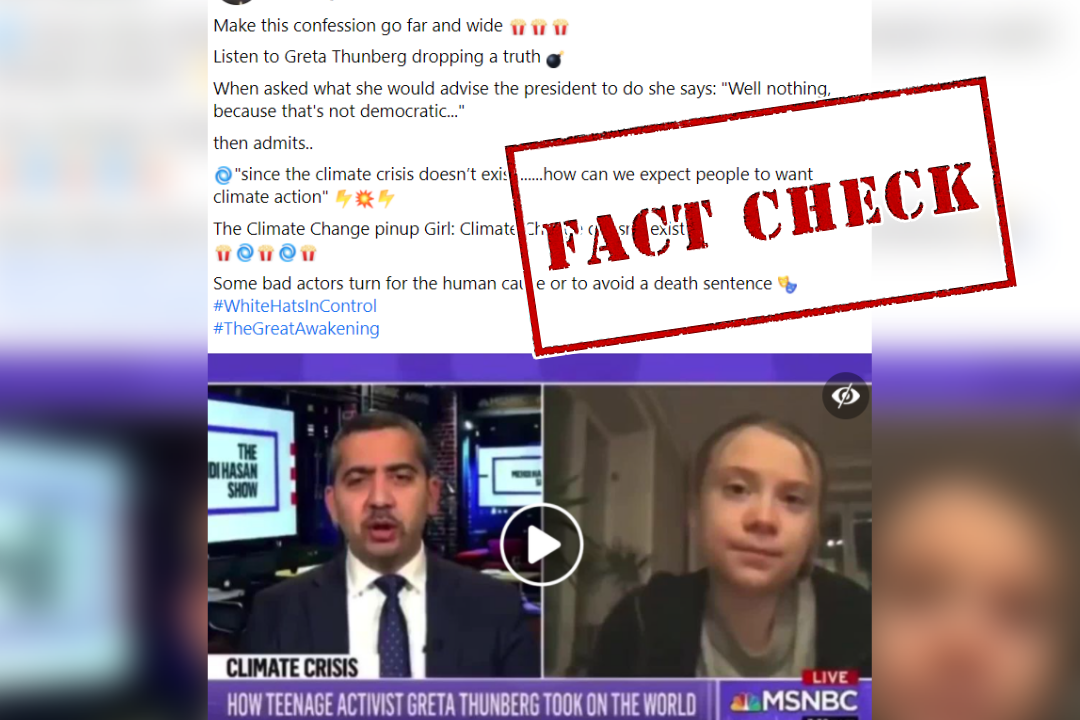 A video is being shared on social media in which Swedish environmental activist Greta Thunberg can be heard saying, “Since the climate crisis doesn’t exist, how can we expect people to want climate action?”

In the viral video, the MSNBC host asks Thunberg how she would respond if the president asked her how to address climate change. Thunberg responds that she would tell him nothing because that wouldn’t be democratic, and she wouldn’t want an elected leader to do anything without voter support.

“So I would just tell him to tell the situation as it is,” Thunberg says at 38 seconds. The camera appears to jump slightly, and Thunberg continues: “Since the climate crisis doesn’t exist, how can we expect people to want climate action?”

The video is shared on Facebook with a caption that reads, “Make this confession go far and wide. Listen to Greta Thunberg dropping a truth. When asked what she would advise the president to do she says: Well nothing, because that’s not democratic…then admits…since the climate crisis doesn’t exist…….how can we expect people to want climate action.” 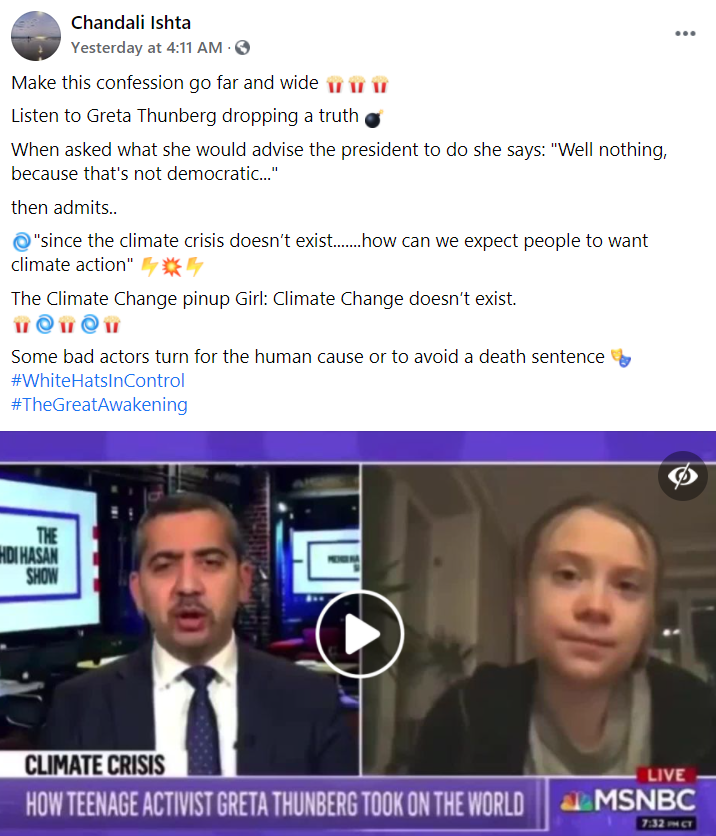 Since Greta Thunberg is a notable environmental activist, if she had made a drastic statement against climate change it should have been covered in the media but we could not find any credible media reports corroborating the viral claim.

We looked up the interview on the MSNBC website and found the original clip which uploaded on March 8, 2021. The description of the interview reads, “Greta Thunberg urges Biden to address the climate crisis.” 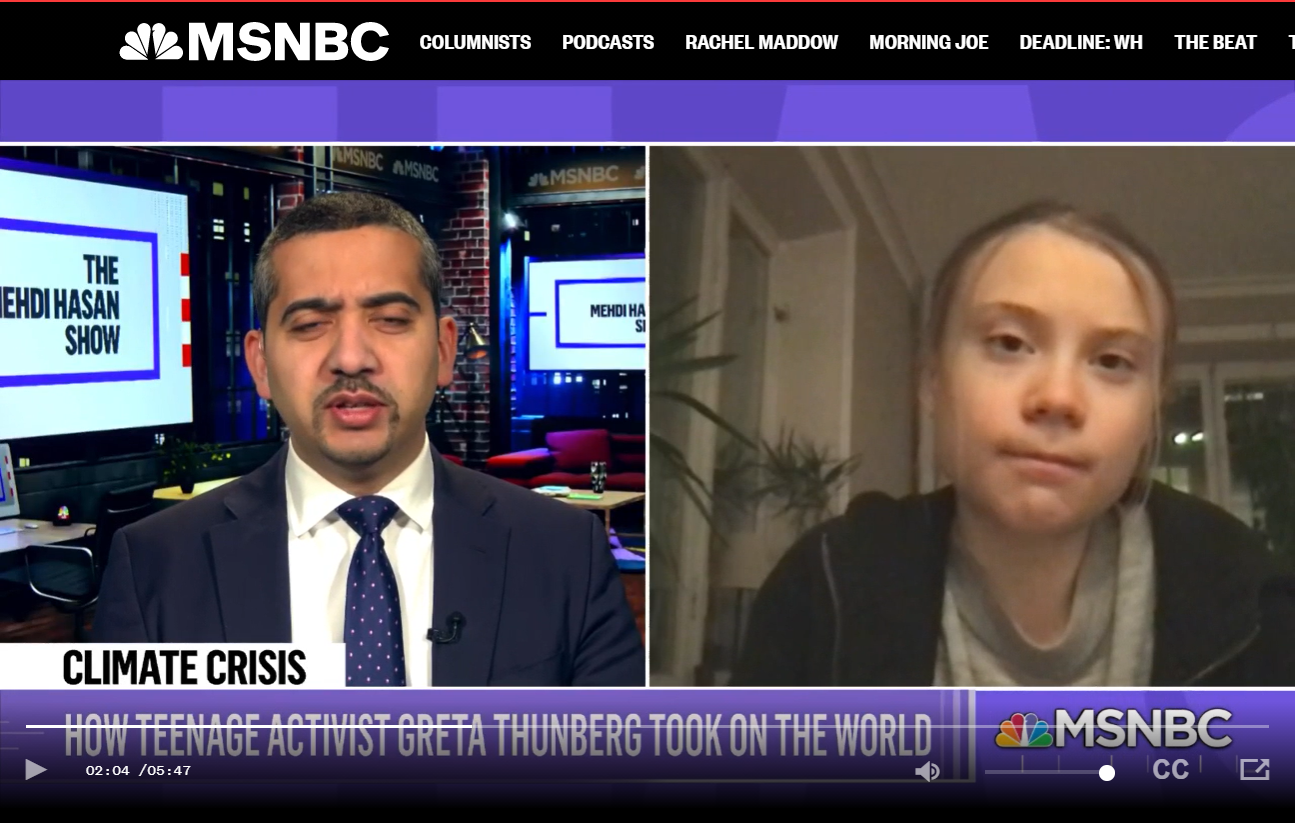 In this video, at 2:00 mins the host asked Greta the same question but her reply was different from what is shown in the viral video.

A careful look at the video made us notice that Thunberg’s image jumps ever so slightly between the two sentences in the viral video (at 38 seconds). Because that’s where one of two edits occurred.

Here is the transcript of Thunberg’s complete answer. Marked in bold are the sentences that the viral video cut out.

“So, what we need now is to raise awareness. To create public opinion. To treat the crisis like a crisis. Because if people are not aware of the crisis that we face, of course, they won’t put pressure on the elected leaders. So, I would just tell him to tell the situation as it is. Because I mean, yes, you could say, I meet with a lot of world leaders and they say ‘I can’t do anything because I don’t have the support from voters.’ Well, how can you expect support and pressure from voters if you aren’t treating the crisis like a crisis– since the climate crisis doesn’t exist, how can we expect people to want climate action?”

In context, it’s clear that Thunberg’s refrain about the climate crisis not existing is an example to make a point, that voters won’t take the climate emergency seriously if they believe it doesn’t exist.

Thus, it is evident that the viral video has been edited to make it seem that Thunberg said that “the climate crisis doesn’t exist.” In reality, Thunberg emphasized the need for leaders to tell voters that climate change is a real crisis. She explained why people would not press for change if they thought climate change didn’t exist.