A video of Prime Minister Narendra Modi is being circulated on social media. It is being claimed that Modi made a statement about his childhood.

In the video, Modi can be heard saying, “When I was a child I used to steal, at that time if my mother had stopped, I would not have become such a robber.”

(Translation: When I was a child I used to steal, at that time if my mother had stopped, I would not have become such a robber) 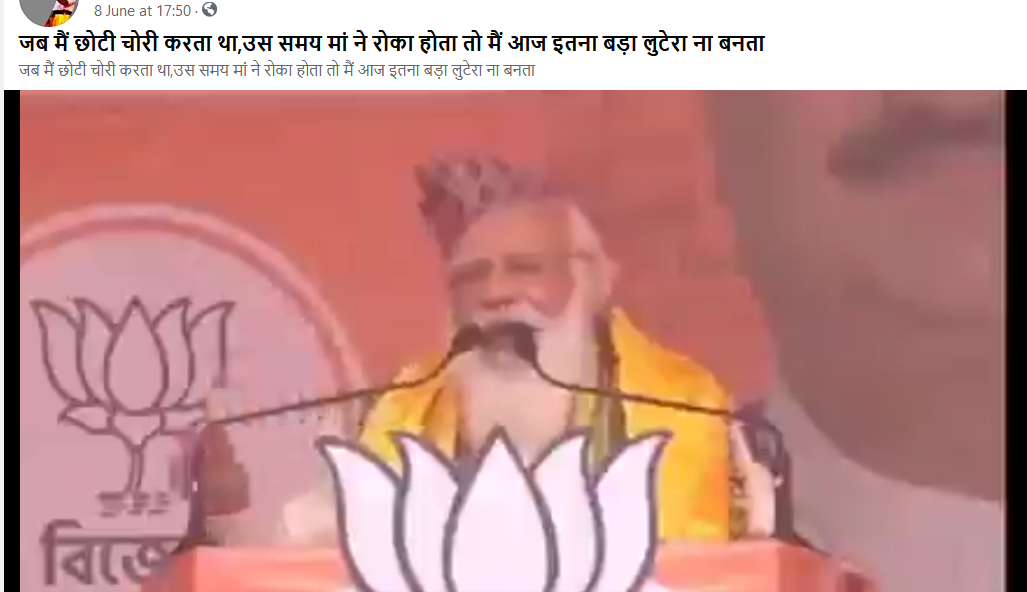 Here’s the link to the above video.

We ran a keyword search and found the full version of the public meeting on the Prime Minister‘s YouTube channel. The video was uploaded on April 10, 2021. The title of the video read, ‘PM Modi addresses public meeting at Siliguri, West Bengal’.

After watching the video, we realised that the viral clip in circulation had been cropped and was taken out of context. In the video, it is evident that Modi was talking about a fictional story about a person who was being hanged for stealing and not about his own childhood.

At 39:35 time code of the video, Modi says, “Brothers and sisters, when we were children, we all heard the story about the notorious robber who was sentenced to death. When asked about his last wish, he said that he wants to meet his mother. The government arranged for the meet but when he met his mother, he bit his mother’s nose. When people asked him why did be bit his mother’s nose, he replied that when he was a child he used to steal, at that time if his mother had stopped, he would not have become such a robber.”

Further, we did a Google search using relevant keywords to look for any reports mentioning the above statement but did not find anything remotely close to it.

Hence, it is evident that the video was cropped in a way to make it look as though PM Narendra Modi is talking about himself while talking about stealing as a child.

Hence, we can say that the videos in circulation are misleading.