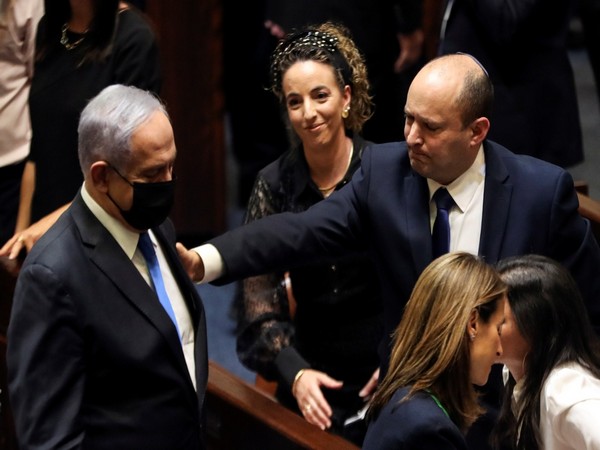 Israeli Parliament, commonly known as Knesset, approved the new government by just a single vote — 60 to 59, with one abstention. Naftali Bennett, a right-wing Jewish nationalist and former tech millionaire, became the new prime minister of the country. It will be the first time in 12 years the country will be led by someone other than Netanyahu.

Yair Lapid, a centrist leader, is set to take Bennett’s place after two years if their government can hold together that long. They lead an eight-party alliance ranging from left to right, from secular to religious, that agrees on little but a desire to oust Netanyahu.

In a speech made before the confidence vote, Bennett hailed his unlikely coalition as an essential antidote to an intractable stalemate.

“We stopped the train before the abyss,” Bennett said. “The time has come for different leaders, from all parts of the people, to stop, to stop this madness.”
Bennett vowed to “maintain allegiance to the State of Israel and its laws, to faithfully fulfill my role as prime minister/a member of the government and to uphold Knesset resolutions.”

Congratulations Pour In From Around The World

From Austria to the United States, wishes poured in from around the world as Naftali Bennett was sworn in as Israel’s new prime minister. India’s PM Modi also sent his congratulatory message on Twitter.

Excellency @naftalibennett, congratulations on becoming the Prime Minister of Israel. As we celebrate 30 years of the upgradation of diplomatic relations next year, I look forward to meeting you and deepening the strategic partnership between our two countries. @IsraeliPM

US President Joe Biden congratulated Bennett on being sworn in as the head of a new government coalition over a phone call. “On behalf of the American people, I congratulate Prime Minister Naftali Bennett, Alternate Prime Minister and Foreign Minister Yair Lapid, and all the members of the new Israeli cabinet,” Biden said in a statement. “I look forward to working with Prime Minister Bennett to strengthen all aspects of the close and enduring relationship between our two nations.”

The phone call comes around two hours after the government was sworn in, Times of Israel reported. Bennett thanked Biden for his support for Israel and its security.

Thank you Mr. President! I look forward to working with you to strengthen the ties between our two nations 🇮🇱🇺🇸 pic.twitter.com/RNYPX4amGE

“Congratulations to @naftalibennett & @yairlapid on forming a new government in Israel. I look forward to continued cooperation on security, trade and climate change, and working together to secure peace in the region,” UK Foreign Secretary Dominic Raab said in tweet.
Meanwhile, German Chancellor Angela Merkel extended good wishes to Bennett after an alliance led by him formed the new government.

“Germany and Israel are connected by a unique friendship that we want to strengthen further. With this in mind, I look forward to working closely with you,” Merkel says in a message addressed to Bennett and shared by her spokeswoman Ulrike Demmer on Twitter.
Austrian Chancellor Sebastian Kurz also congratulated Bennett and Alternate Prime Minister Yair Lapid, stating that Austria will continue to stand by Israel’s side.

“Congratulations to PM @naftalibennett and alternate PM @yairlapid for forming a government. I look forward to working with you. Austria is committed to Israel as a Jewish and democratic state and will continue to stand by Israel’s side,” Kurz tweeted.
In a congratulatory message, World Jewish Congress President Ronald S Lauder said: “I congratulate the leaders of Israel’s political parties who have come together to form a government of national unity that includes all sides of the Israeli political spectrum, from right to left, religious to secular. I am delighted that these efforts have now come to fruition and that this new government has been established.”