A post has gone viral on social media claiming that the state of Uttar Pradesh will be divided into three separate states in the monsoon session of the Parliament.

The post is being shared on Facebook with a caption in Hindi that translates to, “Uttar Pradesh will be divided into three states in the monsoon session, this is what is expected. Yogi will remain CM of Uttar Pradesh. Many names are being discussed for West UP and Bundelkhand. Anyway, it is not easy to gather the population of more than 150 countries of the world in the state which has been happening for so many years.”

In order to ascertain this claim, we searched the web with relevant keywords but found no recent news report referring to the proposal to trifurcate Uttar Pradesh. Had such a proposal indeed been accepted, it would certainly have been reported by all prominent media organizations. 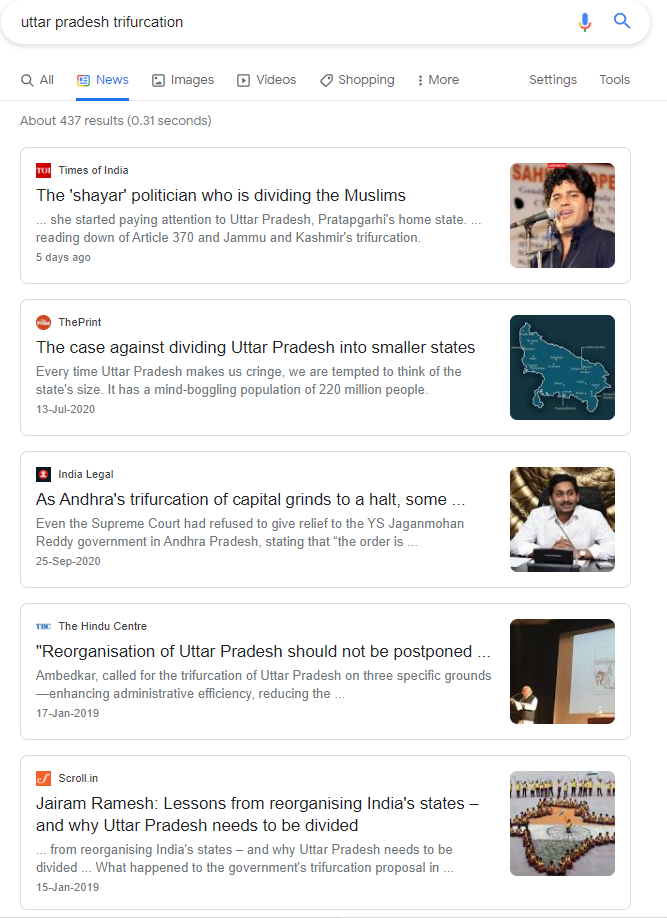 We also found that the proposal to split Uttar Pradesh into multiple states first came into prominence in 2011, when the BSP government in UP had passed a resolution in the state assembly in favour of a division of the state, and forwarded the proposal to the Centre for consideration. However, this proposal was not given the green signal by the UPA government. The issue had been raised in 2013 as well.

The issue of trifurcation of UP keeps cropping up at regular intervals. In 2017, the issue was proposed once again by former CM of UP and BSP supremo, Mayawati. She had pledged the division of UP if BSP were to come to power in the state.

But, there are no media reports and no proposal for the government regarding the division of Uttar Pradesh into multiple states.

The news had also gone viral in 2019. Mrityunjay Kumar, the media advisor to the UP government, dismissed this claim in an interview in 2019. He said, “There is no proposal to split UP. There is no proposal for the same either in front of the Yogi Adityanath govt. The claims circulating on social media are false. The government is concerned with the progress of the entire region. No region is being discriminated against. In such a scenario, it is meaningless to give importance to such demands.”

Searching further, we found a tweet by Press Information Bureau dated June 12, 2021. In the tweet, it was clarified that “This claim fake. The Central Government is not thinking to trifurcate the state of Uttar Pradesh.”

Thus, it is evident from the above information that the claim about the trifurcation of Uttar Pradesh circulating on social media is false.