Fact Check: Did SpaceX Launch A Flight With A Man Sitting On The Ledge? Here’s The Truth | Newsmobile
Wednesday, September 28, 2022

An image is being shared on social media claiming that SpaceX – a private company that designs, manufactures and launches advanced rockets and spacecraft – faked a flight, showing a man sitting on the ledge of the launching spacecraft as proof.

The text embedded on the image reads, “Remember that time FakeX forgot to Photoshop out the guy sitting on their grain silo that they try and pass off as a “space ship”. 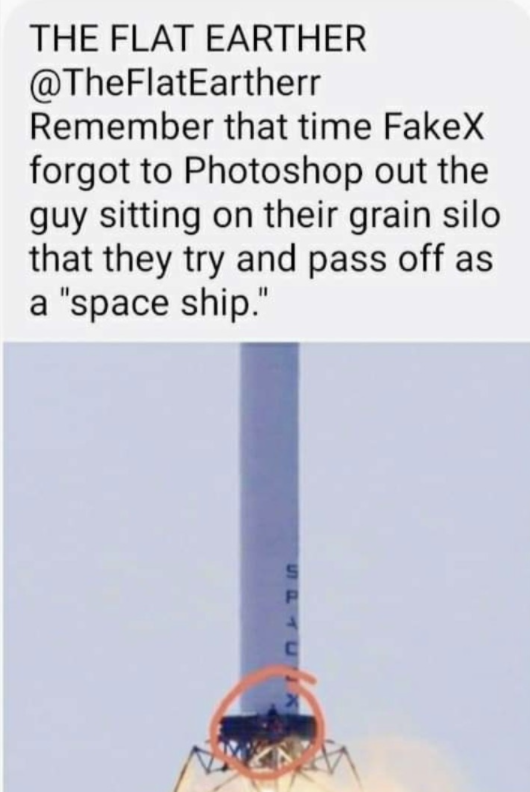 Doing a simple Reverse Image Search with relevant keywords directed us to a tweet by Elon Musk, CEO of Tesla and SpaceX, posted on December 24, 2012. “To provide a little perspective on the size of Grasshopper, we added a 6 ft cowboy to the rocket,” he said in the tweet.

To provide a little perspective on the size of Grasshopper, we added a 6 ft cowboy to the rocket pic.twitter.com/3NMYJqmd

We found another tweet by Elon Musk dated December 24, 2012, which read, “Cowboy riding the rocket no problemo.”

Thus, it is evident that the figure is a 6-foot dummy, not a human.

Taking our investigation further, we searched the web and found that the company also shared videos of the test flight on YouTube, showing the craft taking off vertically and rising 131 feet before landing again on December 24, 2012.

We also found many articles dated December 24, 2012, that reported about this test flight launch by SpaceX.

To conclude, SpaceX did not fake a flight. Images shared on social media show a SpaceX spacecraft carrying a six-foot mannequin, used for scale, on a test flight in 2012.