A post has gone viral on social media claiming that veteran Bollywood actor Dilip Kumar has passed away. 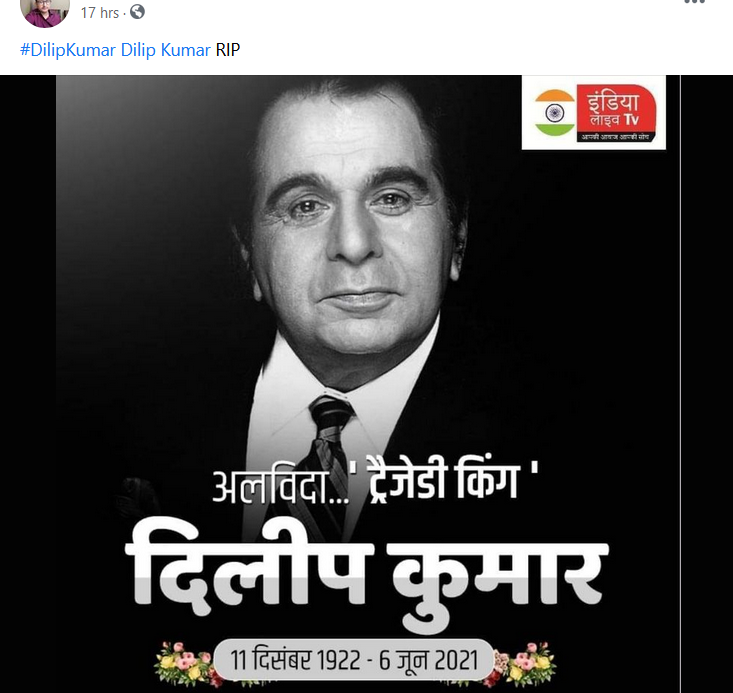 Starting with our investigation, we searched the web for news reports about Dilip Kumar passing away but could not find any news coverage corroborating the viral claim.

Many news reports stated that Dilip Kumar – who was hospitalised at Hinduja Hospital in Mumbai after having breathing trouble on June 6, 2021 – is stable now and out of ICU. Reports further stated that he may be discharged in 2-3 days.

We found a tweet on Dilip Kumar’s official Twitter handle, dated June 6, 2021, in which the viral claim about his demise has been refuted.

“Don’t believe in WhatsApp forwards. Saab is stable. Thank you for your heart-felt duas and prayers. As per doctors, he should be home in 2-3 days. Insh’Allah.”, reads the tweet.

Don’t believe in WhatsApp forwards.
Saab is stable.
Thank you for your heart-felt duas and prayers. As per doctors, he should be home in 2-3 days. Insh’Allah.

In an update, a picture of Dilip Kumar was posted on his official Twitter account on June 7, 2021. Saira Banu can be seen with Kumar in the picture.

Latest. An hour ago. pic.twitter.com/YBt7nLLpwL

Thus, it is evident from the above information that the viral posts claiming that veteran actor Dilip Kumar has passed away are misleading.

Editor’s note: Legendary actor Dilip Kumar, best known as ‘Tragedy King’, passed away on July 7, 2021, at Mumbai’s PD Hinduja Hospital. He was 98. The news of his demise was confirmed by Dr Jaleel Parkar, Pulmonologist, who was treating the veteran actor.

It should be noted that at the time when this fact check was first published (on June 7, 2021), the posts about his demise were fake. Hence, NewsMobile has updated our fact check verdict from ‘Fake’ to ‘Misleading’.