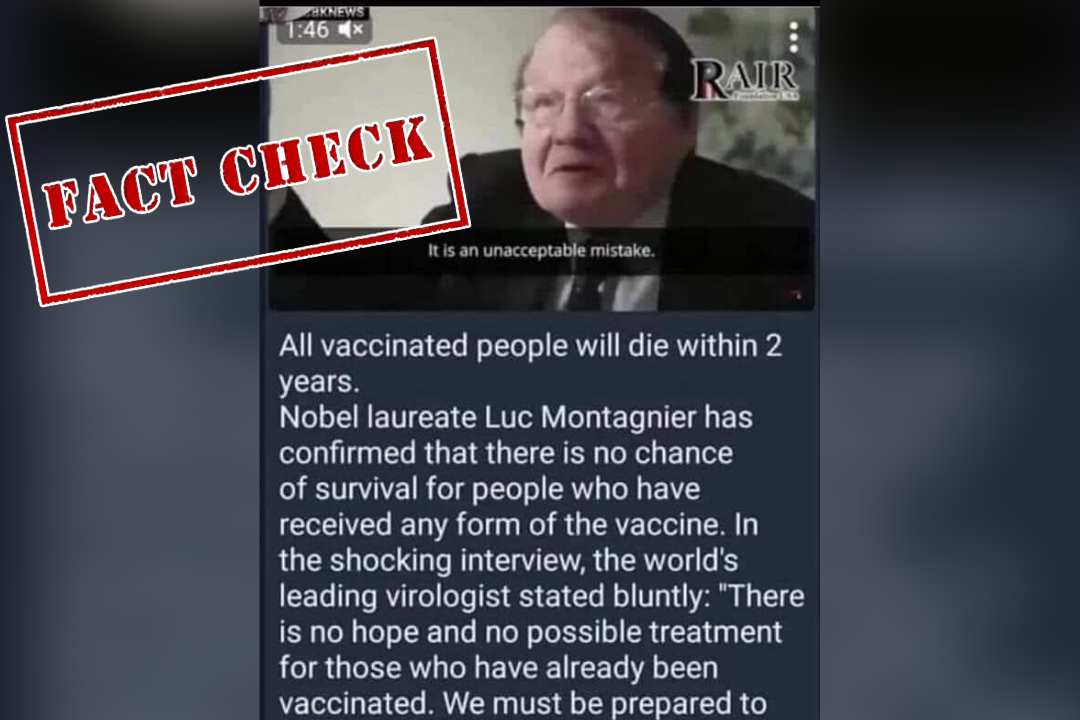 A post has gone viral on social media claiming that French Nobel Laureate, Luc Montagnier, has confirmed that all vaccinated people will die within 2 years and that there is no chance of survival.

The post has been shared on Facebook with a caption that reads, “All Vaccinated People Will die within 2 Years. NOBEL LAUREATE LUC MONTAGNIER HAS CONFIRMED.” 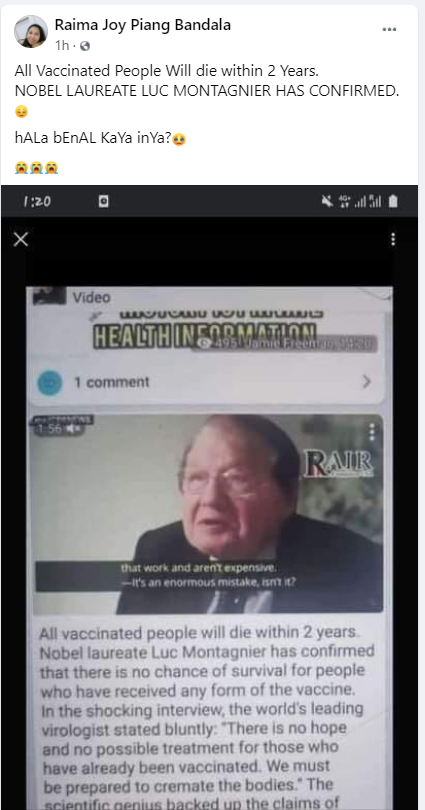 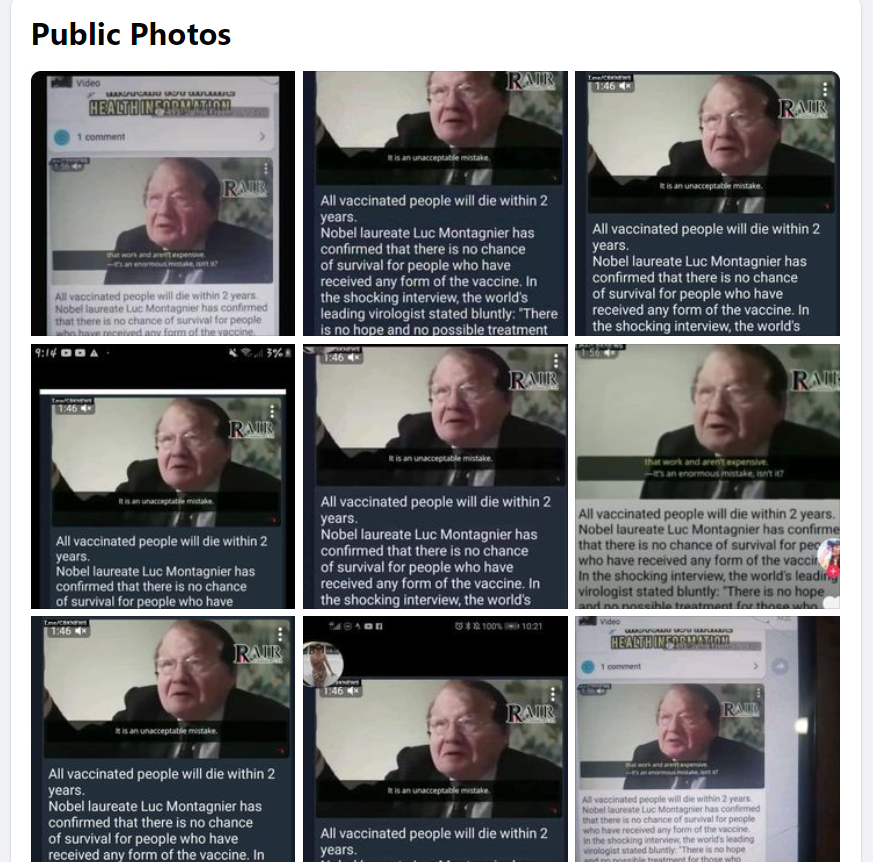 We searched the web with relevant keywords but could not find any media reports corroborating the viral claim. 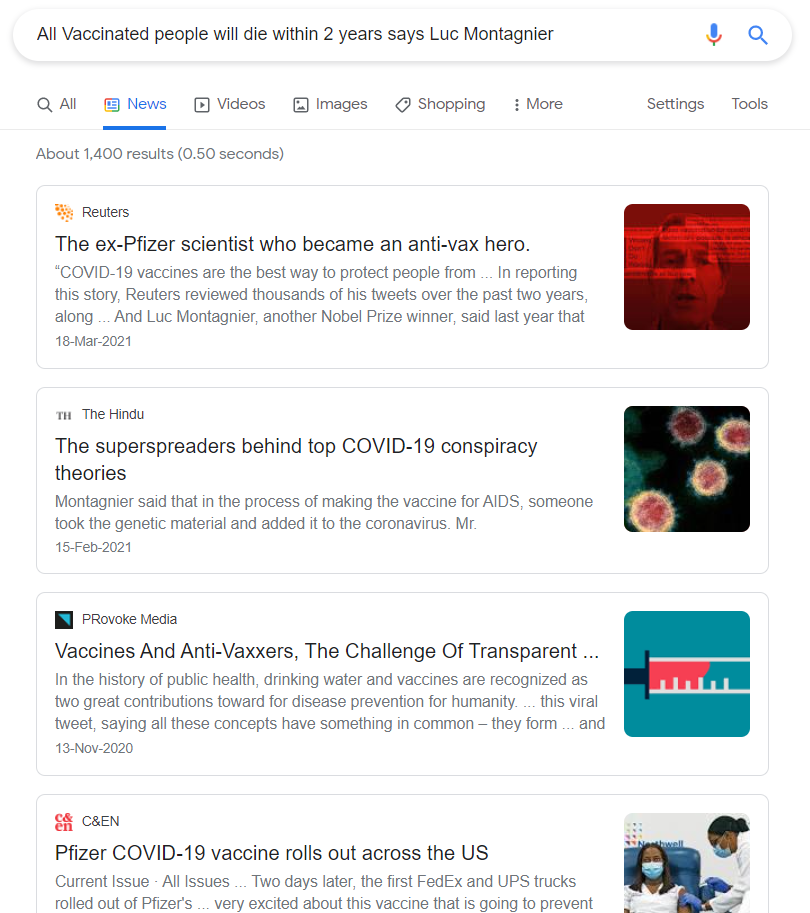 Although the interview in question has been carried by various websites. Had Luc given such a shocking statement, it would have surely been carried by international media. But we did not find any such statement attributed to Luc in any credible media outlet. 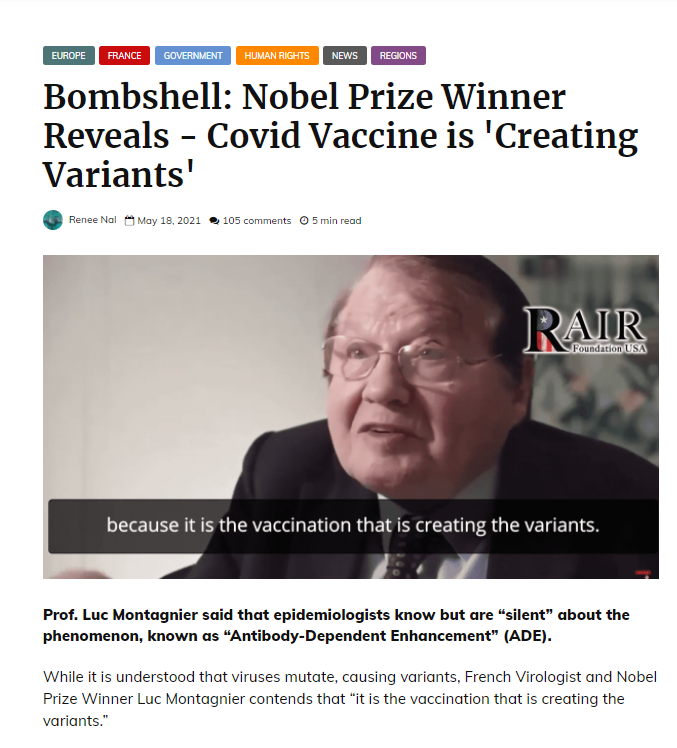 According to the article, Luc referred to mass vaccination as an “unacceptable mistake” and said, “it is the vaccination that is creating new variants.” The report further stated that “the prominent virologist explained that “there are antibodies, created by the vaccines” forcing the virus to find another solution or die. This is where the variants are created. It is the variants that “are a production and result of the vaccines.”

Many epidemiologists know it and are “silent” about the problem known as “Antibody-Dependent Enhancement,” added the Virologist.

However, nowhere in this report Luc claimed that people receiving a vaccination for Covid-19 will die within two years. He is just speculating on a phenomenon called Antibody-Dependent Enhancement (ADE). The complete interview can be seen here.

A French fact-check report, www.rtbf.be, also did a detailed analysis of the interview.

In this report, Sophie Lucas immunologist and president of the Institute De Duve at UCLouvain situates the facts on a timeline that British Variant emerged in the UK in September 2020, long before the vaccination campaign began. “The first trace of the occurrence of the British variant dates from September in England, in people who were not yet vaccinated since everyone will still remember that the vaccines were deployed from December. Some thought it was way too fast, but the reality is there: the vaccines were deployed when the variant was already there and already spreading in the English population. It is absolutely obvious to me that there is no direct correlation between the deployment of current vaccines and the emergence of variants which are of current concern,” says Sophie Lucas

Although, in this report as well, it isn’t mentioned anywhere that Luc has given a statement that all vaccinated people will die within 2 years.

Luc Montagnier was the joint recipient (along with Françoise Barré-Sinoussi and Harald Zur Hausen) of the 2008 Nobel Prize in Physiology or Medicine for his discovery of human immunodeficiency virus (HIV). However, his nomination had led to massive controversy as there were allegations of theft and deception against him.

Last year, he’d said that the deadly coronavirus was manufactured in a laboratory in China’s Wuhan. Though this theory is yet to receive validation, it had created quite a sensation back then.

Talking to NewsMobile, WHO clarified that the viral claim is false. “This is false and not based on current scientific evidence. Vaccines have saved millions of lives by preventing over 25 diseases,” they said.

A Reverse Image Search directed us to a tweet by Assam Police dated May 25, 2021, that debunked the viral claim. The tweet text reads, “A misleading quote attributed to a French Nobel Laureate about Vaccines is being shared on Social Media with a false context.”

A misleading quote attributed to a French Nobel Laureate about Vaccines is being shared on Social Media with a false context.

We request citizens to not promote these unverified forwards.

Remember, Misinformation can be as deadly as the virus itself.#ThinkBeforeYouShare pic.twitter.com/jBjColRZOe

Digging further, we also came across a tweet by Press Information Bureau, Government’s Nodal Agency, in which they refuted the viral claim. “An image allegedly quoting a French Nobel Laureate on COVID-19 vaccines is circulating on social media. The claim in the image is FAKE. COVID19 Vaccine is completely safe,” reads the text.

The claim in the image is #FAKE. #COVID19 Vaccine is completely safe

Thus, it is clear that though Luc Montagnier has indeed raised concerns around vaccination during the COVID-19 pandemic, but he has not said anything like people who vaccinate themselves will die within two years. Therefore, the viral claim is FAKE.