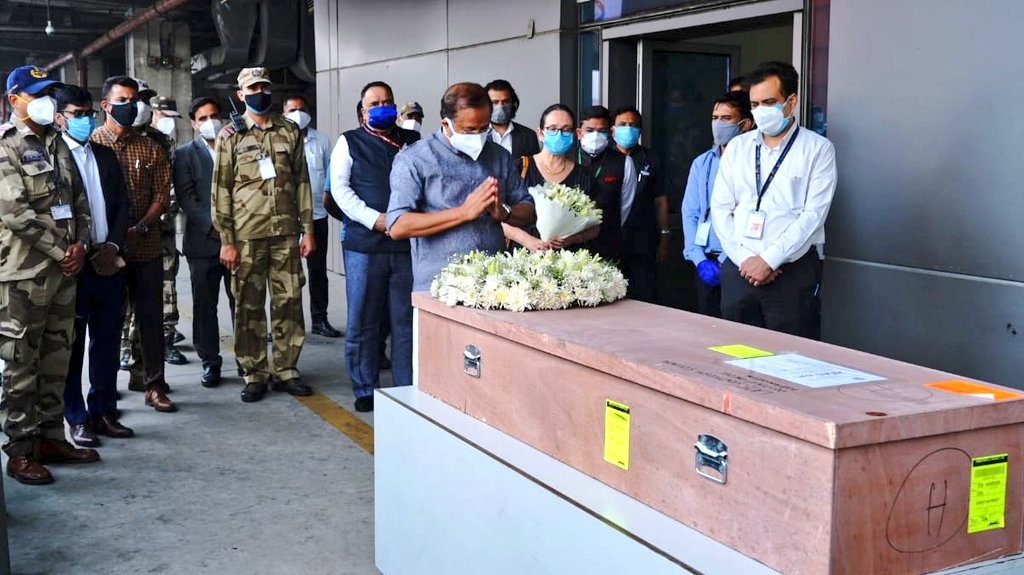 Mortal remains of a woman from Kerala, Soumya Santhosh, who was killed in a rocket attack in the Israeli city of Ashkelon, arrived in New Delhi on Saturday morning.

Union Minister of State (MoS) for External Affairs V Muraleedharan, along with Israeli Deputy envoy Rony Yedidia Clein, paid their last respect to the deceased. “With a heavy heart, received the mortal remains of Ms. Soumya Santhosh in Delhi and paid my last respects. CDA of Israel Embassy @RonyYedidia also joined. I empathise with the pain and sufferings of the family of Ms. Soumya. More strength to them,” Muraleedharan tweeted.

With a heavy heart, received the mortal remains of Ms. Soumya Santhosh in Delhi and paid my last respects. CDA of Israel Embassy @RonyYedidia also joined.

I empathise with the pain and sufferings of the family of Ms. Soumya. More strength to them. pic.twitter.com/97bvOziCpG

On Friday, MoS Muraleedharan had said that the mortal remains of Soumya will reach her native place on Saturday.

“The mortal remains of Ms Soumya Santhosh, who was killed in rocket attacks from Gaza, are being repatriated today from Israel to Kerala through Delhi. They will reach her native place tomorrow. I will personally be receiving the remains in Delhi. May her soul rest in peace,” Muraleedharan said in a tweet. The 30-year-old Indian woman, hailing from Idukki in Kerala, was among those killed in a rocket attack by a Palestinian Islamist group on Tuesday.

Aircraft carrying the mortal remains has taken off for Delhi. https://t.co/oTH9u4iTKS

She was working as a caretaker to an elderly woman at a house in the Ashkelon, which borders the Gaza strip. According to her family, she was living in Israel for the last seven years. Her husband and nine-year-old son stay in Kerala.

The ongoing violence between Israel and Palestine marks a dramatic escalation of tensions linked to the potential eviction of Palestinian families from East Jerusalem by Israeli settlers and access to one of the most sacred sites in the city, which is a key hub for Islam, Judaism and Christianity.With ramping up of rocket attacks and airstrikes from both sides, concerns have emerged that the conflict is likely to evolve into a full-blown war.

Gaza’s health ministry says at least 122 Palestinians, including 31 children, have been killed and more than 900 wounded in the enclave since the latest round of violence began.

At least seven people in Israel have been killed in the rocket attacks launched by armed groups in Gaza, Al Jazeera reports. Israeli Prime Minister Benjamin Netanyahu has said that the Gaza offensive “as needed to restore calm in the state of Israel”.