Vaccination against COVID-19 is underway in full swing worldwide. Amid this, a post has surfaced on social media platforms showing a series of links between China’s Wuhan Institute of Virology, pharmaceutical companies and vaccine research affiliates. 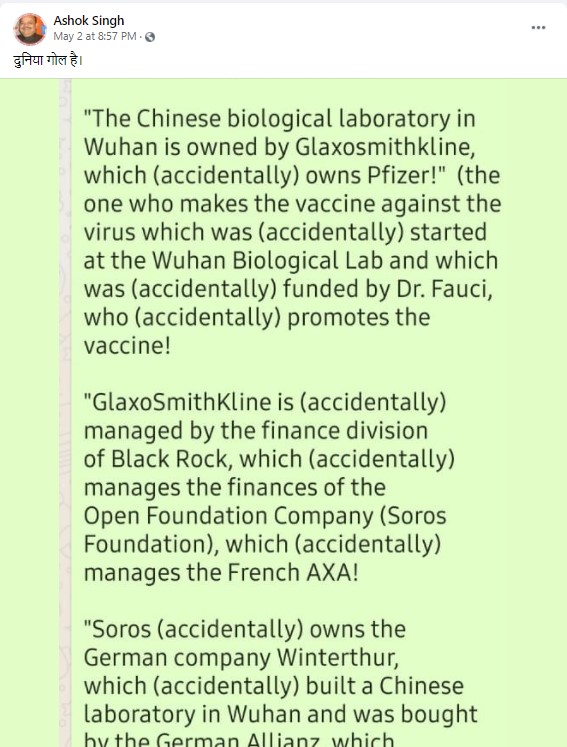 The post’s caption claims a connection between the Chinese laboratory, Wuhan Institute of Virology, pharmaceutical companies Pfizer and GlaxoSmithKlein and Soros Foundation and Bill Gates.

“The Chinese biological laboratory in Wuhan is owned by Glaxo. Who, by chance, owns Pfizer (the one who produces the vaccine!),” the post reads.

It further claims that Pfizer is “managed by Black Rock (sic) finances. Who, by chance, manages the finances of the Open Foundation Company (SOROS FOUNDATION)!”

The post also links investment giants BlackRock and Vanguard Group WHO and Bill Gates, claiming Vanguard is a “shareholder of Black Rock … which, incidentally, is a major shareholder of MICROSOFT The property of BILL GATES, who happens to be a shareholder of PFIZER (which sells the miracle vaccine) and is currently the first sponsor of WHO !!!”

The message is also being widely circulated on WhatsApp and Twitter. 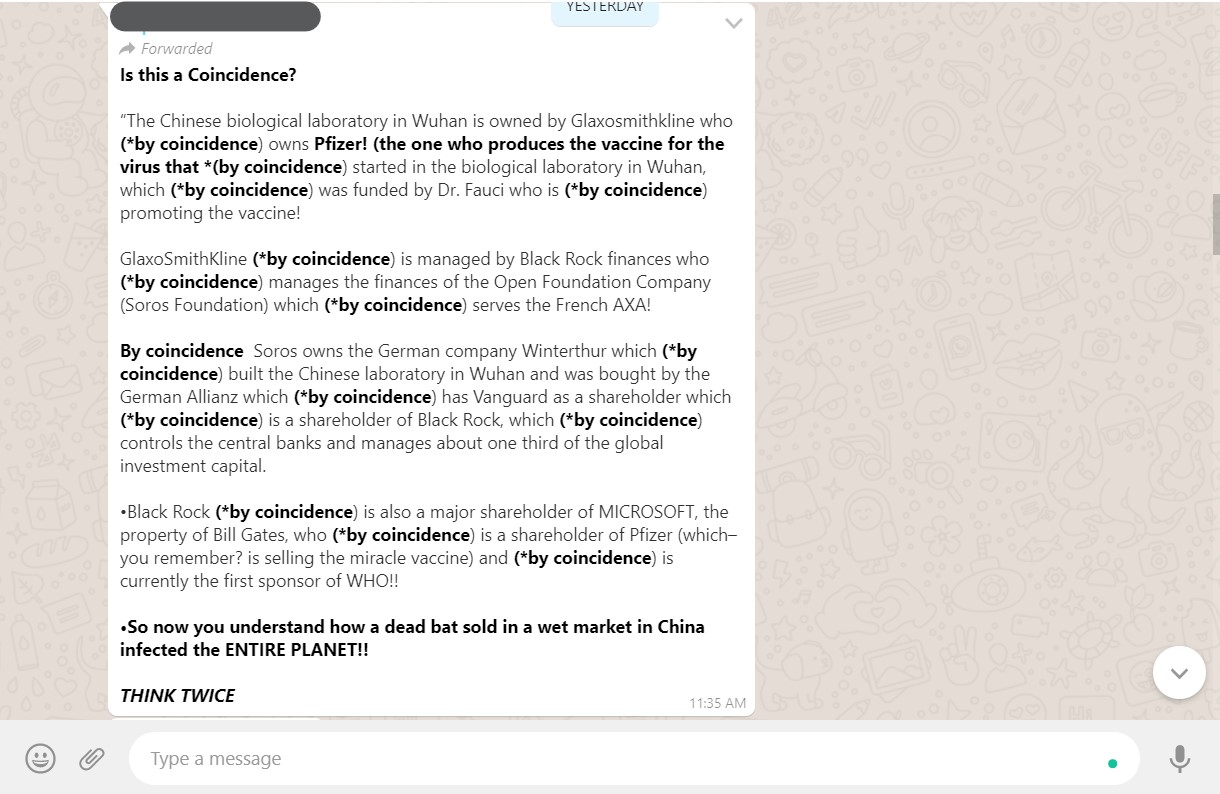 NewsMobile fact-checked the above post and found the claims made to be false.

According to the institute’s website, which studies emerging and major viral diseases, it is under control of the Chinese Academy of Sciences (CAS). And, CAS is controlled by China’s State Council, the country’s main administrative government body.

In an open letter to the science journal Nature in 2019, a CAS representative wrote that the academy has never achieved financial independence from China. As per the letter, half of it’s income comes directly from the government, and the rest comes from “competitive funding or technology transfer.”

According to Pfizer’s website, the company was incorporated in New Jersey in 1900, originally dividing its $2 million of authorized capital into 20,000 shares as a privately held company. But in 1942, the pharmaceutical company offered 240,000 shares of new common stock to the public; now the company has roughly 69% public ownership.

GSK and Pfizer embarked on a joint venture in 2018, but that venture doesn’t involve merging or swapping ownership.

There is no evidence to link Soros’ Open Society Foundation to BlackRock on their websites. However, George Soros’s investment company, Soros Fund Management, earlier held a small number of shares in BlackRock before offloading them in March 2020.

Vanguard is also the largest institutional shareholder in Microsoft, the company co-founded by tech billionaire Bill Gates, followed by BlackRock at the second position in the list.

Notedly, contrary to the claim, Microsoft is not the “property” of Mr. Gates and he only owned around 1.3 per cent of its shares before he stepped down from the company’s board in March 2020. In 2014 he was surpassed by former CEO Steve Ballmer as the software company’s largest individual shareholder.

The claim that the Wuhan Institute of Virology is owned by GlaxoSmithKline is false, which itself renders the following purported connections meaningless. Many of the claims further made in the post are also false independently.

Moreover, we must reiterate that vaccination is a must and every eligible individual must get vaccinated against COVID-19 to ensure we are able to defeat the coronavirus pandemic.