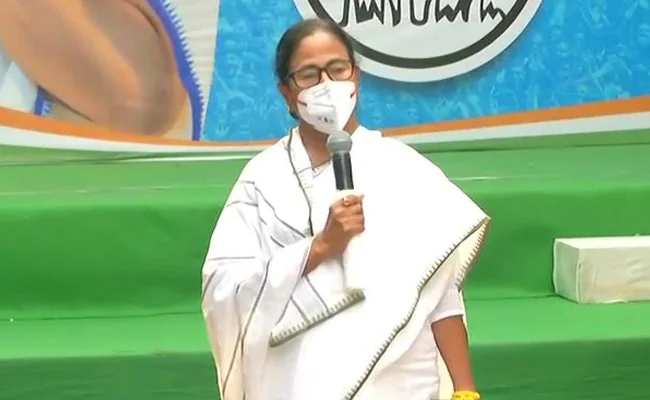 After her defeat in Nandigram, Incumbent West Bengal Chief Minister Mamata Banerjee on Monday alleged that the Returning Officer of the Assembly seat had said that he was threatened against recounting of votes.

Briefing the mediapersons, Mamata said, “I received an SMS from someone wherein Returning Officer of Nandigram has written to someone if he allows recounting then his life would be under threat. For four hours the server was down. Governor also congratulated me. Suddenly everything changed. I will move court.”

A three-member TMC delegation met the CEO at the Election Commission Office in Kolkata regarding the matter.

Asked about the report of the post-poll attack at BJP offices, she said, “They (BJP) are posting photographs of old riots, it is their habit. I do not like any violence. Why BJP is doing that? Even after winning with a thumping majority, we did not do any kind of celebration.”

She further urged to people to maintain peace and not indulge in any violence, and fight against COVID-19.

Bharatiya Janata Party (BJP) leader Suvendu Adhikari defeated the Trinamool Congress (TMC) supremo Mamata Banerjee from the Nandigram constituency.
Adhikari, who was once a close aide of Banerjee, joined the BJP just a few months ahead of the state assembly elections.

As per the Election Commission of India (ECI), Adhikari won with a margin of 1,956 votes in Nandigram.

Meanwhile, Mamata had claimed that she has information that some manipulations were done after the declaration of results for the Nandigram seat. Earlier on Sunday, there were reports of Mamata Banerjee winning from the Nandigram constituency.

Making the game of thrones in Bengal more interesting, Mamata Banerjee chose Nandigram over her home turf Bhabanipur seat this time to test her fate in the 2021 elections. It was the agitation in Nandigram and Singur against the Left government’s land acquisition policies that made Mamata Banerjee the Chief Minister of West Bengal.

Nandigram witnessed a high voltage “Khela” (game of power) on April 1 in the second phase of West Bengal assembly polls. The constituency had seen a direct contest between Banerjee and her former ministerial colleague Suvendu Adhikari.

Notably, Adhikari had pledged that he would quit politics if he did not defeat Mamata by 50,000 votes in Nandigram.

Mamata Banerjee-led TMC won 213 seats in the just concluded West Bengal assembly elections. The BJP garnered 77 seats in the 294-seat state assembly. However, elections for two seats in Murshidabad are postponed due to the demise of candidates due to COVID.