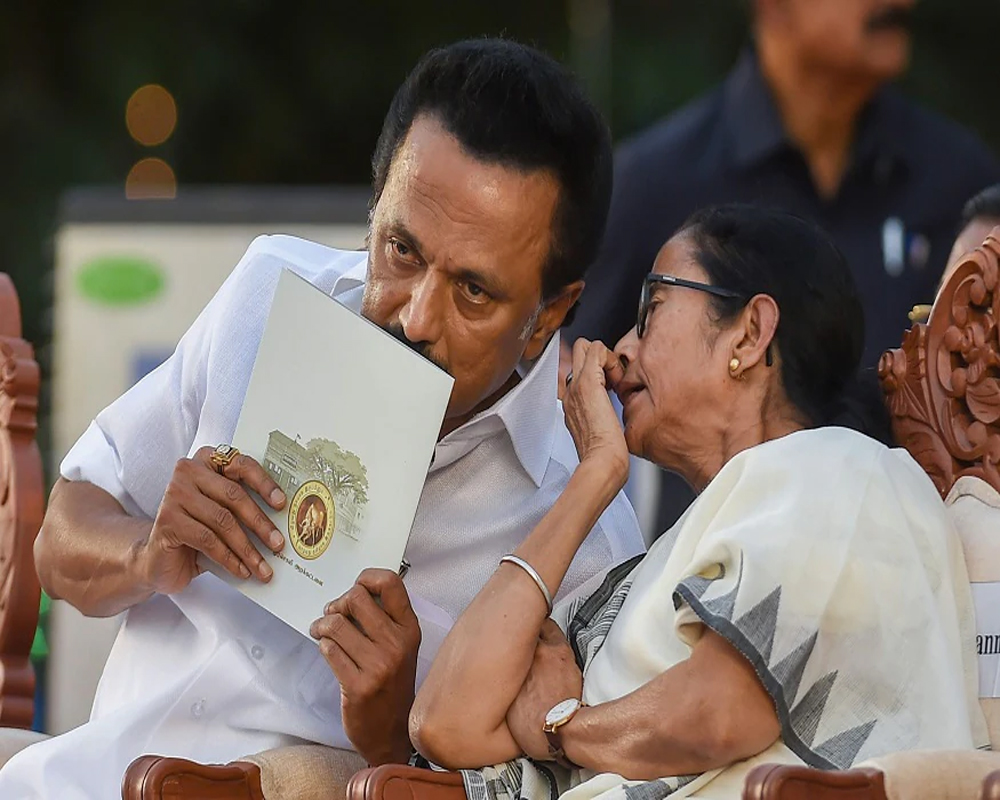 That ‘Bangla Nijer Meyekei Chai’ or ‘Bengal Wants Her Own Daughter’ is being strongly reinforced yet again going by the leads coming out of West Bengal where the Trinamool Congress is inching closer to the 200 mark leaving principal opponent BJP way behind in the electoral race.

We are grateful to the people for this landslide victory. I have to start working for #COVID19 immediately. The swearing-in will be a low-key event because of the prevailing COVID19 situation: West Bengal CM @MamataOfficial pic.twitter.com/4Oc1QjqDfP

The BJP however has been able to consolidate its position further in Assam going by the trends coming in with Congress occupying the second slot in the tally chart for now.

Down south in Tamil Nadu, Stalin’s DMK appears all set to wrest power from the AIAIDMK and form the next government on his own. In Kerela, Pinarayi Vijayan appears to have been successful in stalling the BJP.  The NDA meanwhile appears to be ahead in Puducherry.

Congratulatory messages have started pouring in for Mamata Banerjee already in view of TMC’s stellar performance in the lections.

Congratulations @MamataOfficial on your stupendous victory!
Let us continue our work towards the welfare of people and tackling the Pandemic collectively.

Meanwhile, in complete violation of Election Commission’s directives, supporters of DMK and TMC got down to victory celebrations in Chennai and Kolkata. The poll panel also wrote to Chief Secretaries of the states urging them to stop these celebrations immediately in view of the raging COVID-19 pandemic.

Election Commission of India writes to Chief Secretaries of all States/UTs to “prohibit victory celebrations urgently”. ECI also directs that responsible SHOs and other officers must be suspended immediately and criminal and disciplinary actions must be initiated against them pic.twitter.com/4aEydSH42P

While Assam and West Bengal saw multiple phases of polling, electors in Kerala, Puducherry and Tamil Nadu cast their votes in a single phase on April 6.

The exit polls for the four states and a Union Territory predicted a clear victory for DMK-led alliance in Tamil Nadu, LDF retaining power in Kerala and BJP-led NDA in Assam and a tight contest in Bengal with several surveys giving an edge to the ruling Trinamool Congress (TMC). In Puducherry, the polls predicted victory for NDA.

Counting is taking place at 2,364 counting halls and 822 returning officers and more than 7,000 assistant returning officers have been designated for the purpose. The commission has deputed approximately 1100 Counting Observers to watch the process of counting.