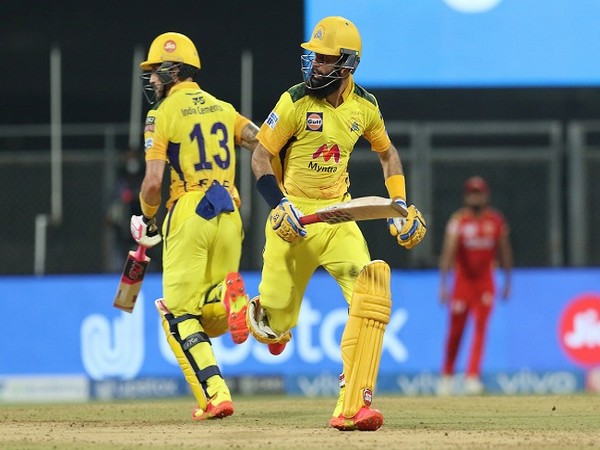 Chahar wreaked havoc as he sent back Punjab Kings’ top order except for skipper Rahul, who became the victim of Jadeja’s brilliant throw.

Chahar first cleaned up Mayank for a duck in the first over and then dismissed Gayle and Pooran within a span of six balls to reduce Punjab to 19/4 after Rahul’s run out.

Deepak Hooda and Shahrukh were in the middle for Punjab Kings at the end of the powerplay but the former chipped it straight to mid-off in the seventh over as Chahar bagged his fourth wicket for the day.

Chahar’s four wickets had helped CSK restrict Punjab Kings to a paltry 106/8. In response, CSK easily chased down the target with 26 balls to spare thanks to a quickfire 46 off 31 from Moeen. With this important chase CSK registered their first win in the ongoing IPL season.

Ruturaj Gaikwad was seen struggling a bit, but Faf du Plessis eased the pressure with two fours and a six in the fourth over. Ruturaj’s stint came to end in the fifth over as he tried to pull Arshdeep Singh but top-edged the ball with Deepak Hooda making no mistake.

Moeen Ali, who then came into bat, started smashing right from the word go as CSK got a move on. In no time. His wicket fell in the 13th over and left the ground keeping CSK at a comfortable spot.

CSK did suffer further hiccups as they lost Suresh Raina and Ambati Rayudu in consecutive balls but Du Plessis and Sam Curran ensured the MS Dhoni-led side got over the line in the 16th over.