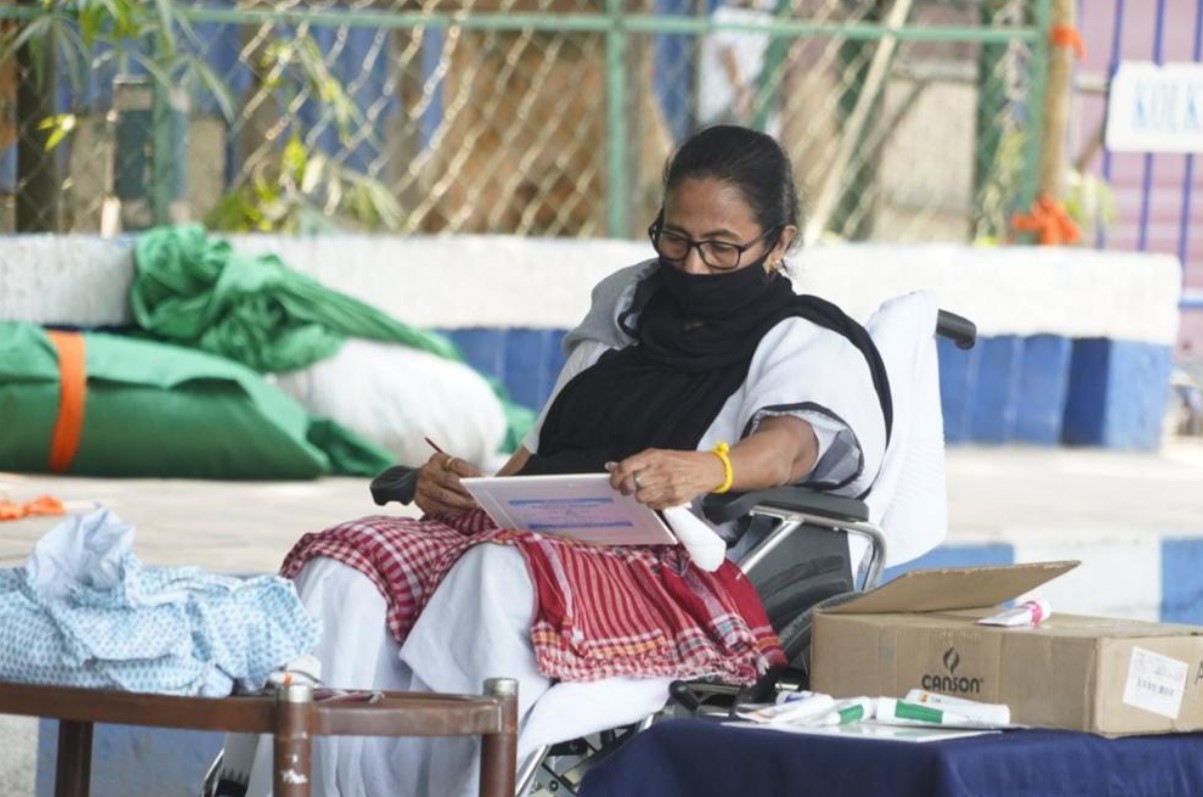 Mamata Banerjee is still as daring as she was thirty years ago. After being banned by the Election Commission, she sits in dharna on the army’s land without getting clearance from the authority.

The TMC applied to the authority of Fort William, the headquarters of Eastern Command, for their party chief’s dharna at the foot of Gandhi statue about two hours before she actually sat there at about 11.35.

A spokesperson of the army told the media that they could not process the request in such a short time. However, as a precautionary step, she sat in dharna alone and was drawing pictures, while her party leaders waited at a distance.

The commission has not only banned the Chief Minister, but also Rahul Sinha (for 48 hours), who is in the first rung of the leadership of the BJP for about 25 years. It has sent notice to Dilip Ghosh, state BJP president, and has warned Suvendu Adhikari too. If it takes action against Dilip Ghosh, it will deflate the allegation of working at the behest of the BJP. Thus, even when Mamata sat in protest, the attack of the party was somewhat blunted.

Even otherwise the CM could not hog much limelight in the media as Home Minister Amit Shah addressed a rally in Darjeeling and BJP president J P Nadda addressed another at Katwa. On Monday, both Narendra Modi and Amit Shah were in Bengal, and along with Shah-Nadda today Rajnath Singh also campaigned in Bengal. The TMC is finding it tough to compete with so many national-level leaders. Even on Tuesday, in most of the TV channels, the BJP leaders outshined the TMC as far as hogging time is concerned.

But the TMC at different place played Mamata Banerjee’s recorded speeches throughout the day, thereby bypassing the ban to some extent. But the insiders feel the damage has hurt the party’s interest slightly, for she is the star campaigner and has missed a couple of meetings today. They also feel that their top leader should refrain from making such statements in the remaining 12 days of campaigning, for another ban on her will hurt the party.

After the sit-in, Mamata Banerjee will address two rallies close by Kolkata, one in Barasat and the other in Salt Lake. It will be worth noting whether she avoids making ‘provocative’ statements from now on.