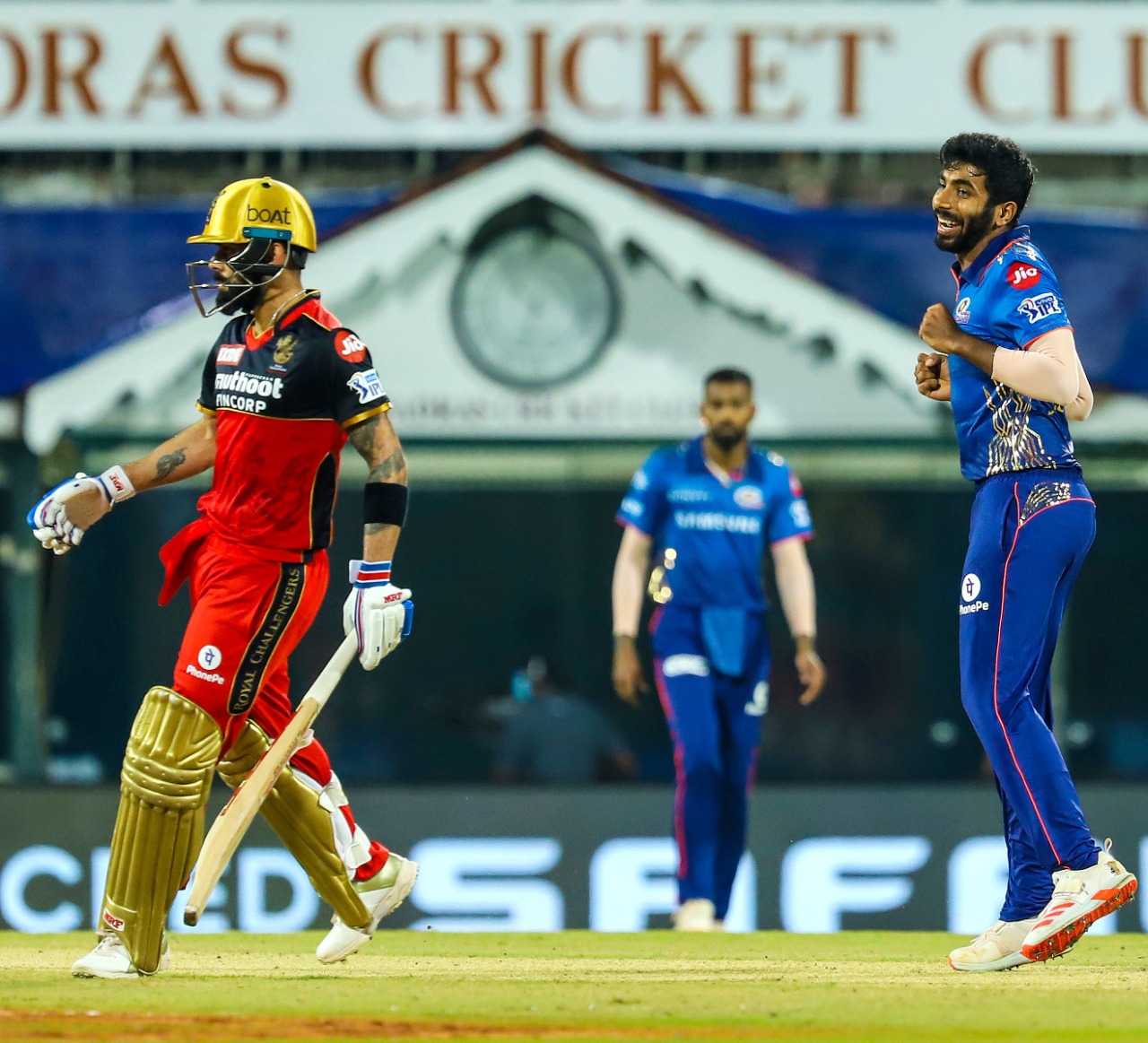 Harshal Patel had picked five wickets (three in the final over) to restrict Mumbai Indians to 159 runs in the allotted 20 overs. In response, RCB got over the line on the last ball, courtesy of some fine hitting by De Villiers in the death overs. RCB needed 39 runs off the last four overs and De Villiers ensured his side was right in the game as he brought down the equation to seven runs of one over. But the Virat Kohli-led side did wobble in the end as the South African batsman was run out in an attempt to steal a double.

Could not have asked for a more gripping way to start #IPL2021. 🤩

Harshal and Mohammed Siraj got RCB over the line on the last ball in the IPL 2021 opening match.
Chasing 160 runs, RCB got off to a firing start with openers Washington Sundar and Kohli clubbing 35 runs off the first four overs.

However, Washington didn’t make his promotion count as Krunal Pandya dismissed him in the fifth over. In the very next over, Trent Boult bowled debutant Rajat Patidar to reduce RCB to 46/2 as the batting powerplay came to an end.

Kohli slowed down in the middle overs but Glenn Maxwell played his natural shots and whacked two glorious sixes and three fours.

Jasprit Bumrah plummed Kohli in front of the stumps and the skipper’s wicket triggered a middle-order collapse as RCB lost two wickets in the 15th over.

Marco Jansen first took the massive wicket of Maxwell and then turned the tide by sending Shahbaz Ahmed back to the pavilion. Daniel Christian too failed to leave a mark as RCB lost the sixth wicket of the day.

But AB de Villiers held his nerves and smashed some glorious shots as the equation, which was 39 runs off 24 balls, came down to 19 runs off two overs.
RCB did wobble as Kyle Jamieson and de Villiers were run out in the last two overs but the side still got over the line in the end.

Earlier, after being asked to bat first, Mumbai Indians got off to a good start with openers Rohit Sharma and Chris Lynn scoring regular boundaries. However, the duo only managed to form a 24-run partnership as Rohit (19) got run out in the fourth over.
Suryakumar Yadav then came out to bat and played brilliantly along with Lynn. Both played with an aggressive mindset and took the team’s score to 86/1 after the completion of 10 overs.

In the 11th over, Kyle Jamieson put an end to their impressive 70-run partnership as the pacer dismissed Suryakumar (31). Soon after that, Washington Sundar caught and bowled Lynn, who missed his half-century by one run.
Ishan Kishan and Hardik Pandya then came out in the middle. However, this partnership also did not last long as Harshal removed Hardik (13) in the 16th over, bringing Kieron Pollard on the field.

RCB bowlers continued their sublime bowling performance and did not allow Mumbai Indians batters to settle. Kishan (28) too was sent back to the pavilion in the 18th over by Harshal. Krunal Pandya then joined Pollard and the duo took the team’s score over the 150-run mark in the 19th over.

Harshal bowled the final over of the innings and dismissed Krunal and Pollard on the first two deliveries. Harshal then bowled Marco Jansen and Jasprit Bumrah got run out on the final delivery of the over.

Man of the Match for RCB, @HarshalPatel23 gives us insights into his bowling after a brilliant performance against MI in the first match of #IPL2021 in Chennai.#PlayBold #WeAreChallengers #MIvRCB pic.twitter.com/VaRWykTbRe