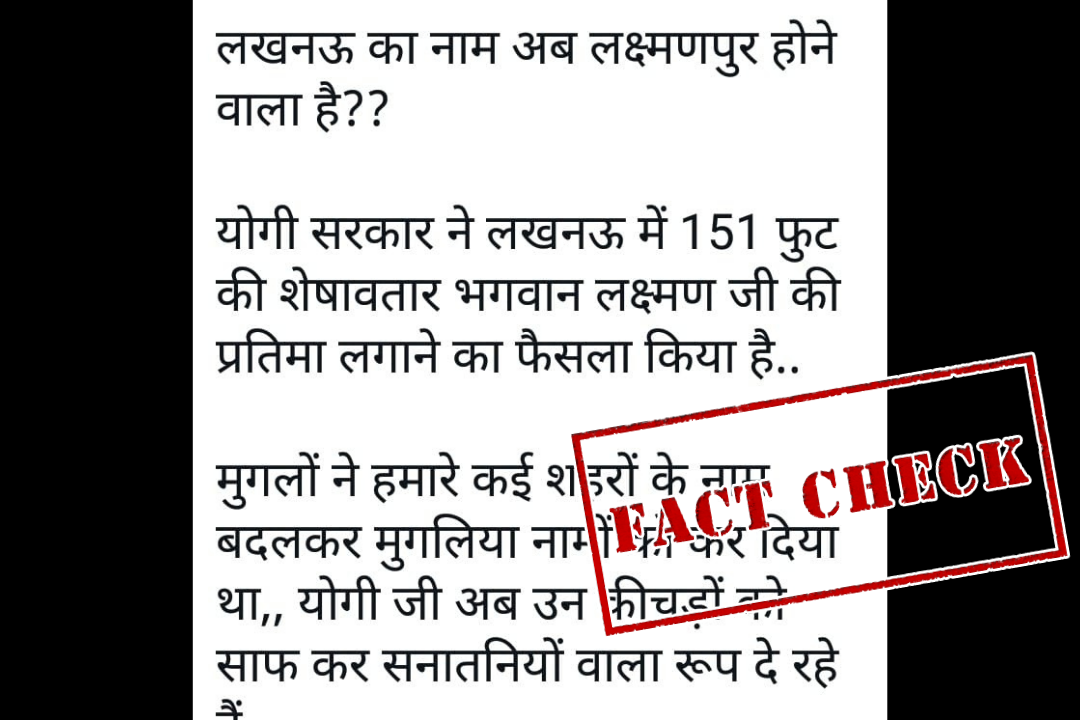 In a viral post, it is being claimed that Uttar Pradesh’s capital Lucknow is being renamed as Laxmanpur (Land of Lord Laxman). The viral post is in circulation on various social media platforms.

The post reads (in Hindi), “Name of Lucknow is now going to be Laxmanpur?? The Yogi government has decided to install a 151-foot Sheshvatara Lord Laxman ji statue in Lucknow. The Mughals had changed the names of many of our cities to Mughalia names, Yogi Ji is now cleaning those muds and giving them the appearance of Sanatanis.”

NewsMobile fact checked this post and found that the claim is misleading.

For our investigation, we ran a Google search to look for the latest government notification/ order regarding the same, but could not find anything relevant.

We also searched UP government’s website and official twitter handle to scan through any such development, but were unable to find anything similar.

However, we discovered that the same demand was raised earlier in February 2021. We found an article by The Hindu, the headline of which said, “Rename Delhi as ‘Indraprastha’ and Lucknow as ‘Lakhanpur’: Kshatriya Mahasabha”.

The article talks about the demand made by Kshatriya Mahasabha to rename Delhi as Indraprastha and Lucknow as Lakhanpur.

We also found an interview of former MP Governor and UP MLA Lal Ji Tandon from 2018 on Hindi news channel Aaj Tak, where he expressed his desire to rename UP’s capital as Laxmanpur (Land of Laxman).

You can see the video below:

Hence, with the above facts on hand, we can conclude that several times, ever since  Allahabad’s name was changed to Prayagraj, the demand of renaming Lucknow had also been raised.

However, no official order has been passed as of now, thereby this post is misleading people with unverified claims.