Home Battle For States Banglar Meye Vs Bhumi Putra: ‘Insider-Outsider’ Debate At The Core Of Battle For... 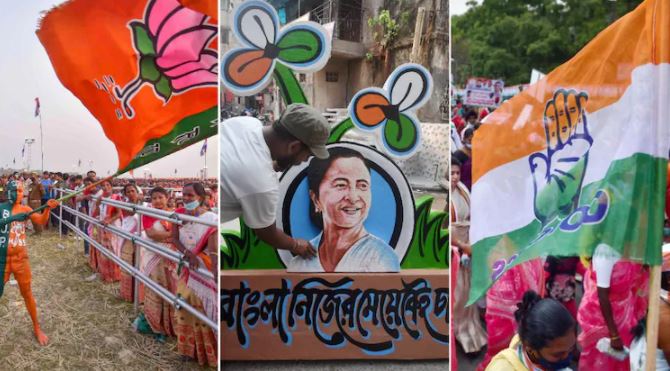 As the countdown begins for the most watched electoral bout this poll season, the big question is who will have the last laugh on May 2 in battleground Bengal. Will it be ‘Banglar Meye’ (Bengal’s daughter) or ‘Bhumi Putra’ (Son of the soil)?

In what is being billed as its toughest fight ever, the Trinamool Congress – which unseated the 34-year-old Left regime in 2011, is now pitted against the Bharatiya Janata Party which is going all guns blazing against Chief Minister Mamata Banerjee.

Confident of sweeping Bengal with over 200 seats, BJP has promised to have a ‘Bhumi Putra’ as the next chief minister to counter TMC’s ‘Bangla Nijer Meyeke Chai’ (Bengal wants its own daughter) poll blitzkrieg.

At the core of this battle lies the fight for identity. TMC, which has gone to town with the ‘Khela Hobe’ (The Game Is On) slogan, has been been on a poll overdrive to project BJP as a party of outsiders far removed from the core ethos of Bengal, Bengali culture and identity.

Slamming Mamata for stinging BJP with the ‘outsider’ tag, Prime Minister Narendra Modi said, “Bengal brought together the people of India through Vande Mataram, and on that land, Mamata-didi is talking about ‘bohiragoto’. No Indian is an outsider here, they are the children of Bharat Mata.”

Reiterating that Bengal was the land of icons like Rabindranath Tagore, Bankim Chandra Chattopadhyay and Netaji Subhas Chandra Bose, PM Modi said in such place no one was an ‘outsider’.

“When the BJP forms government in Bengal, the Chief Minister will be a son of the soil,” PM Modi said at an election rally drawing thunderous applause from his supporters.

PM Modi’s comments provide a strong counter to Mamata’s war cry against ‘bohiragoto’ or ‘outsiders’. She has been reiterating regularly that she won’t allow West Bengal to be ruled by “outsiders” from Delhi or Gujarat. Taking a cue, TMC leaders have been calling BJP functionaries as “election tourists”.

Taking advantage of the fact that the BJP is yet to announce the Chief Ministerial face, TMC – under strategist Prashant Kishore’s blueprint – repositioned Mamata – widely known as Didi or elder sister – as ‘Banglar Meye’ or Bengal’s daughter to strike a deeper emotional connect with the voters while amplifying the insider versus outsider debate.

Interestingly, identity politics has taken a new spin in Nandigram where Mamata is fighting her long time lieutenant turned foe Shuvendu Adhikari who recently siwtched camp and joined the BJP.

Rooted in Midnapore polity, Shuvendu – who was the architect behind Trinamool’s Nandigram siege in the past, has now dubbed Mamata as an outsider. The BJP has projected Suvendu as ‘Bhumi Putra’ while slamming Mamata as an ‘election tourist’.

As the ‘insider-outsider’ fight escalates, it now remains to be seen who Bengal votes for. May 2 will hold the key.