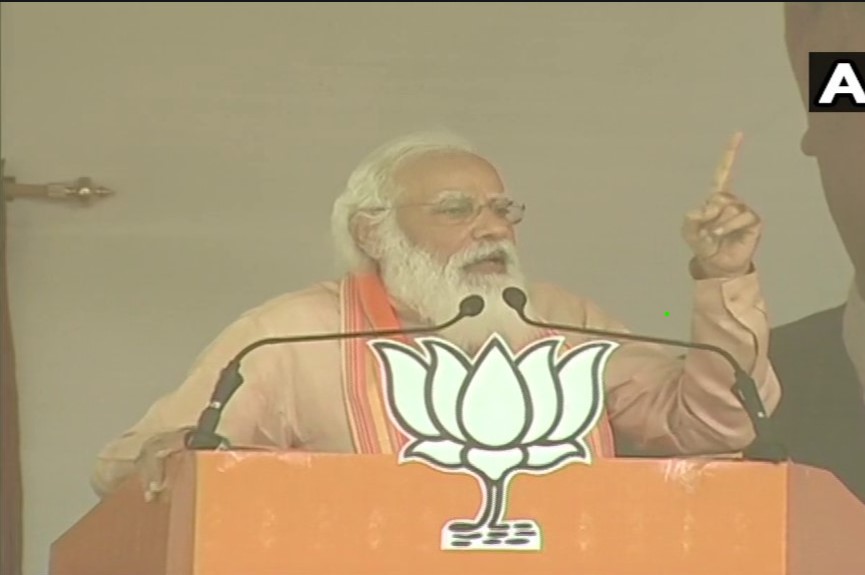 Prime Minister Narendra Modi on Tuesday lambasted opposition parties in Tamil Nadu and said Congress and DMK are working on a dynastic agenda and only the National Democratic Alliance is working on a developmental agenda.

Addressing an election rally in Tirupur district, PM Modi said, “On the one hand, National Democratic Alliance (NDA) has its developmental agenda, on the other hand, Congress and Dravida Munnetra Kazhagam (DMK) have their dynastic agenda.” “In a few days from now, Tamil Nadu will vote to elect a new Assembly. NDA family seeks your blessing to serve the people of the state. We seek your votes based on a solid agenda of all-around development, inspired by the ideals of former chief ministers of Tamil Nadu MG Ramachandran and Amma Jayalalithaa,” he said.

Speaking at a rally in Dharapuram, Tamil Nadu. https://t.co/hFpzBS0ElS

The Prime Minister said that the progress of society is not complete without the empowerment of women but in the rule of DMK and Congress crimes against women had increased.

“We in the NDA are inspired by the thoughts and ideas of the great Andal and Avvaiyar. We believe that the progress of society is not complete without the empowerment of women,” he added.

Chief Minister of Tamil Nadu Edappadi K Palaniswami was also present at the event.
The Assembly elections in Tamil Nadu will be held in a single phase on April 6 and the counting of votes will be done on May 2.

Polls will be held for 234 seats in the state with the Congress-DMK and BJP-AIADMK alliance being the major groups contesting against each other.