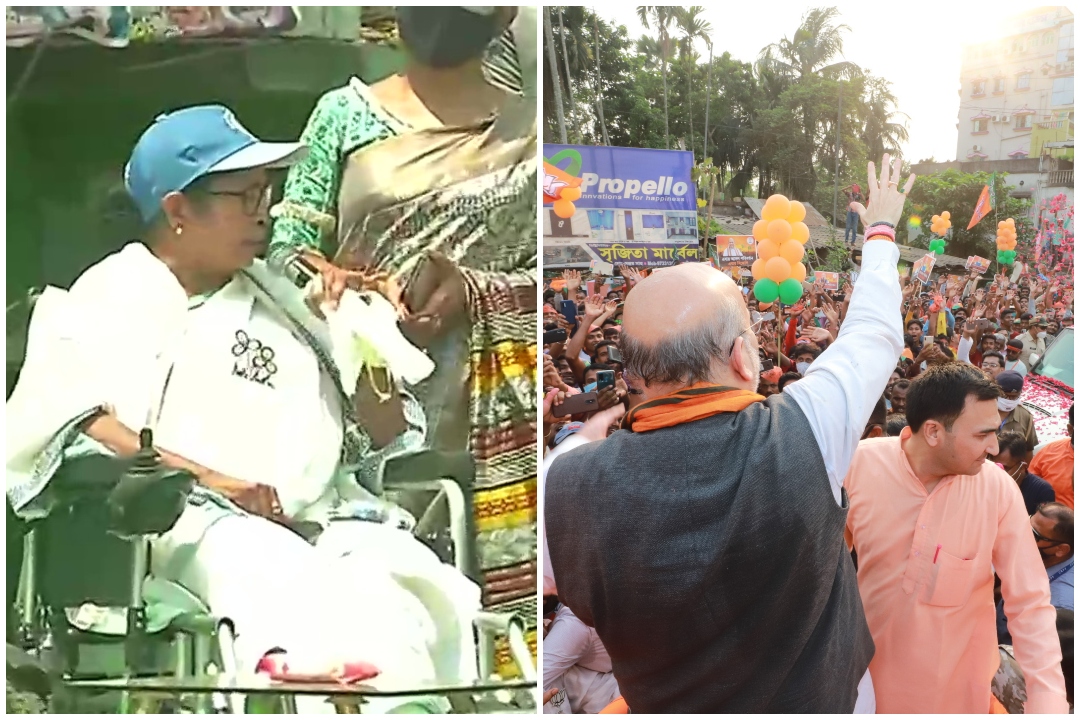 As Amit Shah and his candidate Subhendu Adhikari take out a massive roadshow in Nandigrm today, Mamata Banerjee declares that she doesn’t hold the people from her constituency responsible for her injury. She got a leg injury here in Nandigram earlier and claimed it was a conspiracy hatched to stop her from campaigning. The Election Commission has termed the incident an ‘accident’,

Bengal’s once hugely popular Didi is facing a strong anti-incumbency current this time. Even Prashant Kishor, Trinamool Congress’ election strategist has admitted it. The Chief Minister’s chosen constituency Nandigram has become a symbol of the tough fight ahead in the remaining 264 constituencies of the state where the poll is yet to be held. Out of it, 30 constituencies will vote on Thursday, and Nandigram is one of those. Earlier on Saturday, polls were held in the first phase in 30 constituencies.

Mamata Banerjee is nursing a bad leg injury after an incident in Nandigram. After she dubbed it as a pre-planned attack, Prime Minister Narendra Modi has commented in a public rally that on the polling day the people of Nandigram will give Didi a befitting reply for such insinuation against them. On the last day of campaigning, Mamata issued a rebuttal while addressing a rally in Tengua of her new constituency. She said, “People of Nandigram were not blamed for my injury… I still believe that some goons from outside had planned that attack on me.”

The battle royale of Nandigram will be remembered for fierce and ugly attacks against the opponent by both the CM and her rival Suvendu Adhikari, who was Didi’s erstwhile commander of Nandigram movement and her minister till last year. Mamata has claimed that the attack on the protesters in 2007 was aided by Suvendu himself. In retaliation, Suvendu has not only dubbed Mamata a ‘liar’, he has said if the ‘Begum’ wins Nandigram will become Pakistan.

The WB chief minister also faced hazing today while she was on her way to address a rally. As she was passing by the ground where Amit Shah was addressing a rally, the BJP supporters yelled Jai Shree Ram slogans.