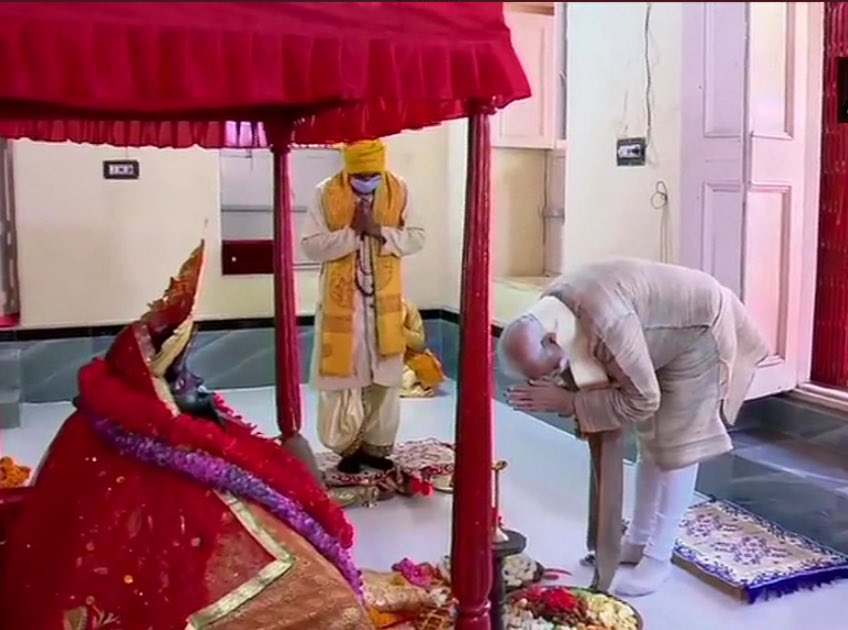 Prime Minister Narendra Modi’s visit to Jeshoreshwari and Orakandi Temples in south-western Shatkhira and Gopalganj to offer prayers on the second day of his landmark Bangladesh visit is being keenly watched not just by the Sheikh Hasina government but also by Trinamool Congress supremo Mamata Banerjee across the border in poll-bound West Bengal as well.

While for the Hindus residing in Bangladesh, PM Modi’s visit sends out a message loud and clear that India stands firmly behind the 8.5 per cent Hindu population in the country and puts the onus on Sheikh Hasina to ensure their rights are protected, his temple tour brings in hope for the Matua community across the border as well.

Feeling blessed after praying at the Jeshoreshwari Kali Temple. pic.twitter.com/8CzSSXt9PS

Why so? A sect of Hindu Dalits, the Matuas, remember with fondness PM Modi’s 2019 visit to their temple in Thakurnagar, a suburban town about 70 km from Kolkata, and his meeting with Matua matriarch ‘Baro Ma’. BJP bagged 18 out of the 42 seats in the general elections that followed and made a debut in Bongaon constituency of which Thakurnagar is a part.

The fountainhead of the Matua community – Harichand Thakur – spread his his message from Orakandi where he was born in 1812. The place where PM Modi went to and prayed on Saturday morning.

Mukut made of silver with gold plating. Hand made over three weeks by a traditional artisan. pic.twitter.com/xNg0pjrmkZ

PM Modi’s visit to Orakandi has triggered hope of citizenship among the Matuas. More so since Home Minister Amit Shah has been categorical about rolling out Citizenship Amendment Act (CAA) which will fast track citizenship for Bengal’s Matuas, who are refugees from Bangladesh and settled here after partition.

Incidentally, Matuas have considerable sway in over 78 assembly seats in West Bengal, where in some cases they are about 40 to 50 per cent of the population. PM’s visit to the Matua shrine in Bangladesh coupled with the CAA assurance will have a ‘positive impact’ amongst the Matuas, BJP feels.

“It’s been 74 years and no government in the past has helped us get citizenship, Matuas were used as a vote bank,” a BJP leader said.

BJP is going to town not just with its CAA implementation assurance but with its proposed support schemes for the Matuas which includes a corpus of Rs 100 crore for welfare of refugees, Rs 10,000 for each refugee family annually for five years after they acquire citizenship, a hassle free single-window clearance for key documents including Aadhaar card, ration card and voter ID card, a special fund for refugee colonies including one in Thakurnagar and a monthly pension of Rs 3,000 to Matua Dalpatis.