Bombay Begums a Netflix original series, aired on The Women’s Day has been the talk of the town ever since its release. The series revolves around the lives of 5 women who live in Mumbai and are shown as ‘Begums’. The show has been written and directed by Alankrita Shrivastava and focuses on Rani, Fatima, Lily, Ayesha and Shai.

OTT has the power to make superstars virtually overnight — and that’s been the case for the Bombay Begum stars. Let’s dig deeper into their ‘reel life’:

Pooja Bhatt plays Rani, a CEO at a bank. The actor is seen nearly after two decades on the silver screen. Prior to this, she did a cameo appearance in ‘Sadak 2’. She has acted in some National Award-winning films like ‘Zakhm’ and ‘Tamanna’.

Shahana Goswami plays Fatima in the series; she is junior to Rani in the office and has her own struggles in trying to please her husband. Shahana was recently seen in the BBC One series ‘A Suitable Boy‘, alongside Tabu and Ishaan Khatter. Goswami is known for her roles in movies like ‘Honeymoon Travels‘, ‘Rock On!‘ among others.

Amruta Shubhash plays the role of Lily, a woman who puts all her effort to improve her life from being a bar dancer so she can provide a better life for her child. Shubhash has previously acted in ‘Sacred Games 2‘ and ‘Gully boy‘.

Plabita Borthakur plays the role of Ayesha who is a bisexual from a small town who comes to Mumbai. Plabita made her debut in the Hindi Film industry with movie ‘PK‘ and has worked in films like ‘Lipstick in My Burkha‘ and ‘Breathe: Into the Shadows‘.

Aadhya Anand, the youngest Begum has started her acting career with the Netflix series. She plays Shai who is the narrator throughout the series. 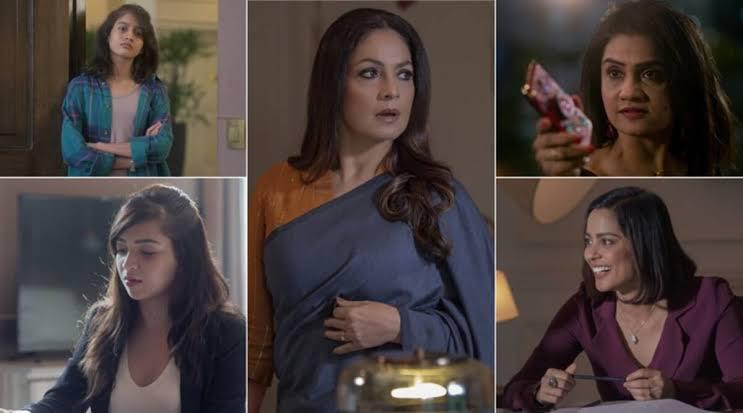