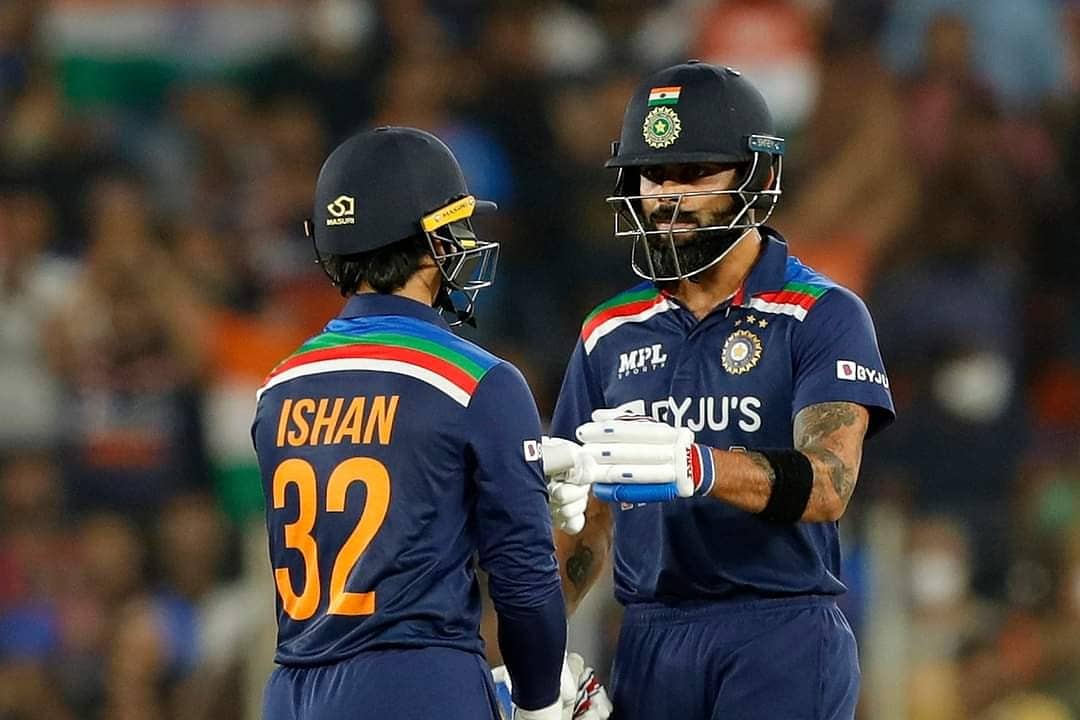 India skipper Virat Kohli led from the front while Ishan Kishan scored a magnificent half-century on debut as hosts registered a seven-wicket win over England in the second T20I here at the Narendra Modi Stadium on Sunday evening.

With this win, the hosts leveled the five-match series 1-1. Kohli played an unbeaten knock of 73 runs while Kishan scored 56 runs. Chasing the target of 165, India once again witnessed a poor start with KL Rahul being dismissed in the very first over of the innings. Rahul (0) was caught behind off Sam Curran’s delivery.

Opener Kishan was then joined by Kohli on the field. The duo played with an attacking mindset and the team touched the 50-run mark in the sixth over. In the 10th over, the debutant smashed two back-to-back sixes to Adil Rashid to bring his maiden international half-century.

💬 “He is a fearless character & should continue to back his instincts.”

However, in the same over, Rashid made a comeback and dismissed Kishan on the last bowl of the over which brought Rishabh Pant out in the middle. Pant scored 26 runs off just 13 balls before getting out.

Kohli was then accompanied by Shreyas Iyer. Just like Kishan, Kohli also completed his half-century by hitting an impressive six as India inched closer to the target. Continuing his stunning form, Kohli easily took the team over the line in the 18th over.

Earlier, a perfect display of death bowling helped India restrict England to 164/6. Put in to bat, England didn’t have a great start as Bhuvneshwar Kumar had Jos Buttler (0) adjudged leg before wicket on just the third ball of the innings. Dawid Malan then joined Jason Roy in the middle and the duo revived the innings for the visitors, taking the score to 44/1 after the end of the powerplay.

Malan and Roy eventually stitched a 63-run stand for the second wicket which came to an end in the ninth over after leg-spinner Yuzvendra Chahal had Malan (24) adjudged leg-before wicket, reducing England to 64/2.

Roy (46), for the second time in a row, then missed out on his half-century as he was sent back to the pavilion in the 12th over by Washington Sundar. The right-handed batsman went for a big shot, but he ended up holding out to Bhuvneshwar in the deep. Jonny Bairstow (20) got a reprieve in the 14th over of the innings, but he was sent back to the dressing room in the very same over by Sundar.

In the final four overs, the hosts conceded just 28 runs and as a result, England was restricted under the 170-run mark. For the hosts, Washington Sundar and Shardul Thakur returned with two wickets. Ben Stokes was dismissed after playing a knock of 24 while Sam Curran remained unbeaten on 6. Skipper Eoin Morgan also contributed with 28.