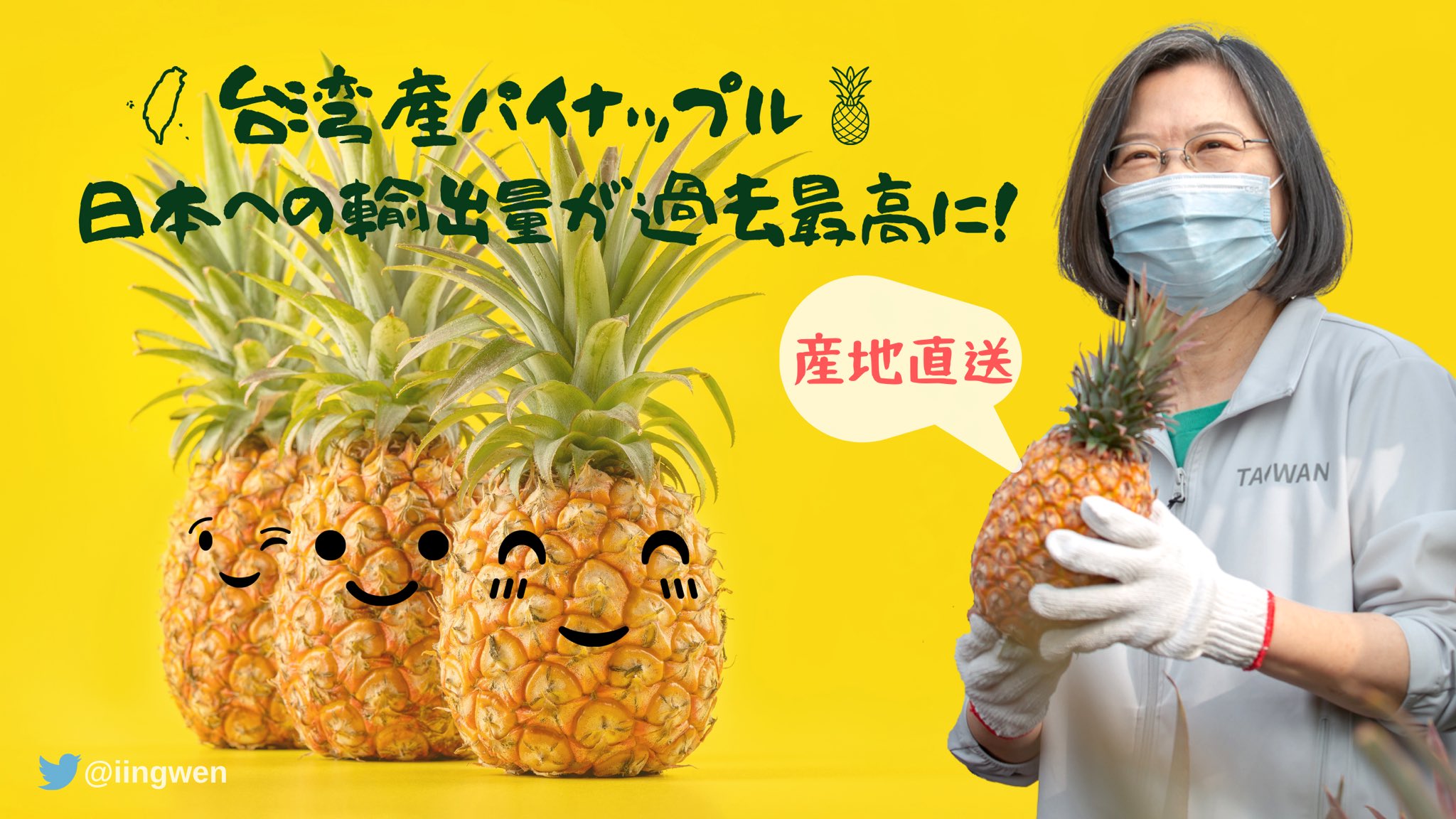 China’s attempt to squeeze the pulp out of Taiwan’s economy seems to have fizzled out. While China announced a ban on imports of Taiwanese pineapples late last month citing pest infestation in recent shipments, Taiwan swung into action with the #FreedomPineapple movement.

The government under President Tsai Ing-wen launched the launched #FreedomPineapple movement on social media and called upon the individuals, corporates and other nations to buy Taiwan grown pineapples. President Tsai also took to Twitter with a call to action in this regard.

Our 🍍 pineapples 🍍 are the world’s finest, & we are working to sell them to even more countries so everyone can enjoy delicious #Taiwanese fruit. They are sure to put a smile on your face. pic.twitter.com/ghH7DfTUx2

President Tsai also urged people to support farmers in Taiwan’s tropical south by having pineapples and said her government planned to spend an estimated 1 billion New Taiwan dollars (US$36 million) on measures aimed at offsetting the impact of the Chinese ban, which would include expanding the export market and targeting the US, Japan and Singapore.

She also began promoting pineapple savories like pineapple cake on her Twitter handle which led to homegrown chefs dishing out delectable pineapple based dishes in their menus.

Within no time #FreedomPineapple became the national tagline in Taiwan. “Remember #Australia’s #FreedomWine?” Taiwan’s Foreign Minister Joseph Wu asked on Twitter. He refreshed people’s memories about a campaign last year encouraging people to buy Australian wine after China slapped it with steep tariffs of more than 200 per cent as Beijing-Canberra diplomatic ties nosedived.

Here we go again! Our pineapples are now banned by #China to punish farmers in the south. Remember #Australia‘s #FreedomWine? I urge like-minded friends around the globe to stand with #Taiwan & rally behind the #FreedomPineapple. JW

“I urge like-minded friends around the globe to stand with #Taiwan & rally behind the #FreedomPineapple,” he wrote.

The ban on #Taiwan pineapples by #China flies in the face of rules-based, free & fair trade. The fruit is of the highest quality & meets the strictest international certification standards. We call on #Beijing to reverse the decision! pic.twitter.com/DQxjVlkY0G

In just a few days, orders for pineapples – both domestic and from other countries – surpassed the total shipped volume to China last year. As per Taiwan’s Council of Agriculture, the island nation exported 45,621 tons in 2020, with nearly 97 per cent going to mainland China, 2 per cent to Japan and 1 per cent to Hong Kong.

Vice-President Lai Ching-te meanwhile confirmed that pineapple orders from Japan, Australia, Singapore, Vietnam and the Middle East were helping to replace orders from China, and that “the traveling pineapples are looking forward to their new visas.”

Taiwan’s #FreedomPineapple movement has received the support of diplomatic offices in Taipei as well.

Tested & verified by the diplomatic community, #FreedomPineapple is simply the best! JW pic.twitter.com/XBRUVlYp0p

While the American Institute posted photos on social media of Taiwanese pineapples on their premises, including one of a happy Brent Christensen, the de facto American ambassador, with three large pineapples on his desk, the Canadian office posted a photo of his colleagues with pineapple-topped pizzas and Britain went a step further and shared a recipe for a pineapple upside-down cake.

Japanese media meanwhile reported that Taiwan is being “bullied” over its pineapple exports by China and many outraged Japanese have vowed to buy Taiwanese pineapples to show their support. 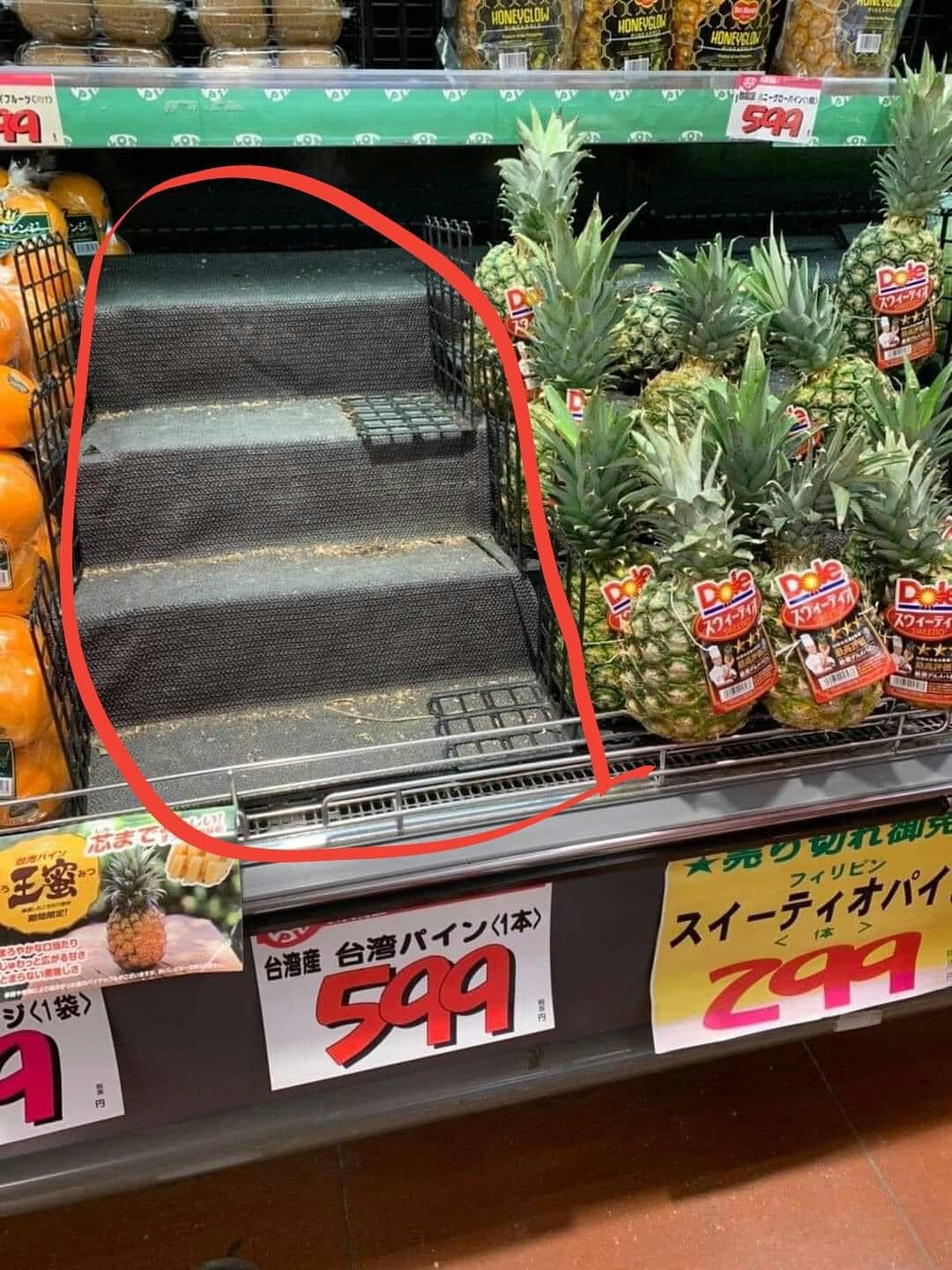 A Japanese netizen surnamed Matsuda posted a picture on the Japan-Taiwan Exchange Facebook page showing an empty shelf of Taiwanese pineapples selling for 599 Japanese yen (US$5.52) while the shelf stocking Philippines grown pineapples selling at a cheaper rate for only 299 yen was sill fully stocked.

The ban on Taiwanese pineapples is China’s latest attempt to corner the local government. While China maintains that Taiwan is a part of its own territory and categorically objects to any move on the part of other nations to recognize Taiwan as a sovereign entity, Taiwan strongly refutes such assertions.