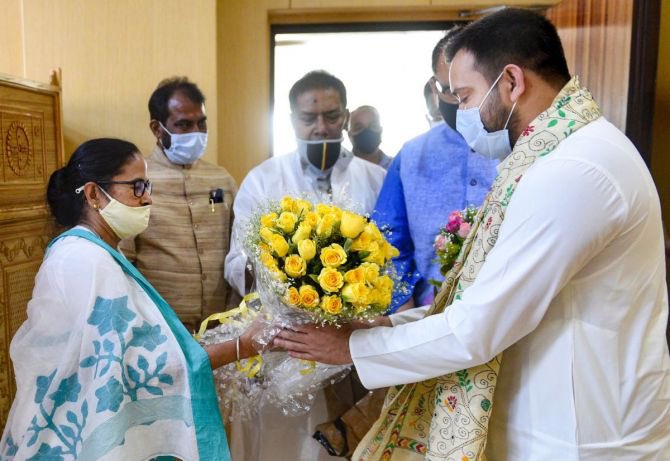 Despite NDA’s triumph in the Bihar assembly election, it was Tejashwi Yadav’s relentless efforts that made the RJD single largest party. His determination, grit, and hard work made him the youngest opposition leader in the country.

With his farsightedness, he is expanding RJD’s roots in other states too by making friendly relations with its counterparts. His first mission is to render the solemn path for TMC in the upcoming Bengal assembly polls.

Tejashwi, on several occasions, has mentioned the need to stop BJP from coming to power in various states. In order to follow the suit, he met West Bengal CM Mamata Banerjee and offered his full support to her in the coming assembly polls in the state.

In one of the interviews, Tejashwi said that it is his priority and duty to not let any communal and fascist force come into power.

Addressing the media after meeting the TMC supremo at Nabanna, Tejashwi said, “It is Lalu Ji’s decision to provide full support to Mamata Ji. Our first priority is to stop BJP from coming to power in Bengal.”

He also took a jibe at the “baraat” of BJP leaders in the recent weeks arriving in West Bengal to campaign for the party and questioned their ability to run the government in the state better than Chief Minister Mamata Banerjee.

“BJP is such a big party. The BJP has brought a “Baarat” (procession) of all the union ministers to West Bengal. Who is their groom? Name a single BJP leader who is more experienced than Mamta Banerjee in running the government. Will you hand over power to a leader who does not have any experience?” Tejashwi Yadav asked while speaking to the media.

According to several reports, there are approximately one crore Biharis residing in the state. Tejashwi appealed to all the people from Bihar, domiciled in Bengal, to vote for the ruling TMC.

On the other hand, BJP thinks that RJD would not play a major role in West Bengal politics.

“Before the 2019 Lok Sabha polls, Mamata Banerjee projected herself as Prime Ministerial candidate by calling leaders from all parties on a stage in Kolkata. In spite of this, the people of Bengal did not vote for her. Tejashwi Yadav or anybody will not make any difference in West Bengal polls because people have faith in Narendra Modi and want a government under his leadership,” BJP national general secretary Kailash Vijayvargiya said.

Met him today not as a politician but as a Senior Cricketer nd a brother to him. I have always felt dat he was a talent who could have excelled in cricket 🏏 but destiny had other things planned 4 him. A dynamic leader in d making. God bless @yadavtejashwi 🤗 pic.twitter.com/XThzUwwQsN