On Thursday, India and Pakistan released a joint statement saying that they have held discussions regarding establishing a mechanism for hotline contact among both nations. Both sides also agreed to a ceasefire along the Line of Control (LoC) starting from February 25.

Director Generals of Military Operations of India and Pakistan also reviewed the current situation across the Line of Control (LoC) and other sectors ‘in a free, frank and cordial atmosphere.

“In the interest of achieving mutually beneficial and sustainable peace along the borders, the two DGsMO agreed to address each other’s core issues and concerns which have [the] propensity to disturb peace and lead to violence,” the statement issued in Delhi and Islamabad said, adding that they would use existing mechanisms of hotlines and flag meetings to resolve any “misunderstandings”. 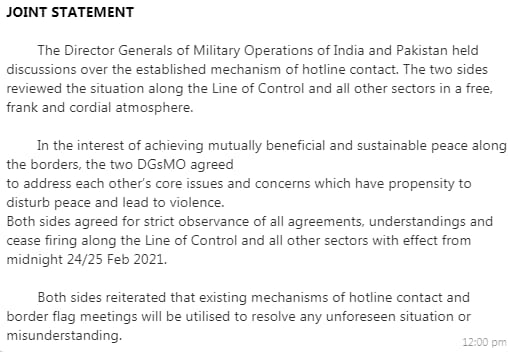 Apart from this, India has reiterated that its position on key issues with Pakistan remains unchanged.

When asked whether DGMO talks which reinforce the 2003 ceasefire agreement will pave the way for the dialogue process between India and Pakistan, Ministry of External Affairs spokesperson Anurag Srivastava said, “On relations with Pakistan we expressed earlier that India desires normal neighbourly relations with Pakistan. We have always maintained we want to address issues if any in a peaceful and bilateral manner. On key issues our position remains unchanged. I don’t think I need to reiterate.”

India has a stated position that talks with Pakistan cannot take place until it stops supporting terrorists and infiltration.

Informed sources to ANI said India sees the ceasefire as a positive move but will test and verify. New Delhi will watch closely whether cross-border acts of terrorism have really come down after the ceasefire.Sources  to ANI say if the commitment is kept, it will augur well for the people living along LoC who face incessant attacks of rockets and mortar shells during ceasefire violations.

According to data provided by the Ministry of Defence in Parliament earlier this month, there were 5133 instances of CFVs along the LoC and other areas in Jammu and Kashmir, resulting in 46 fatal casualties in 2020, and 3,479 CFVs in 2019.