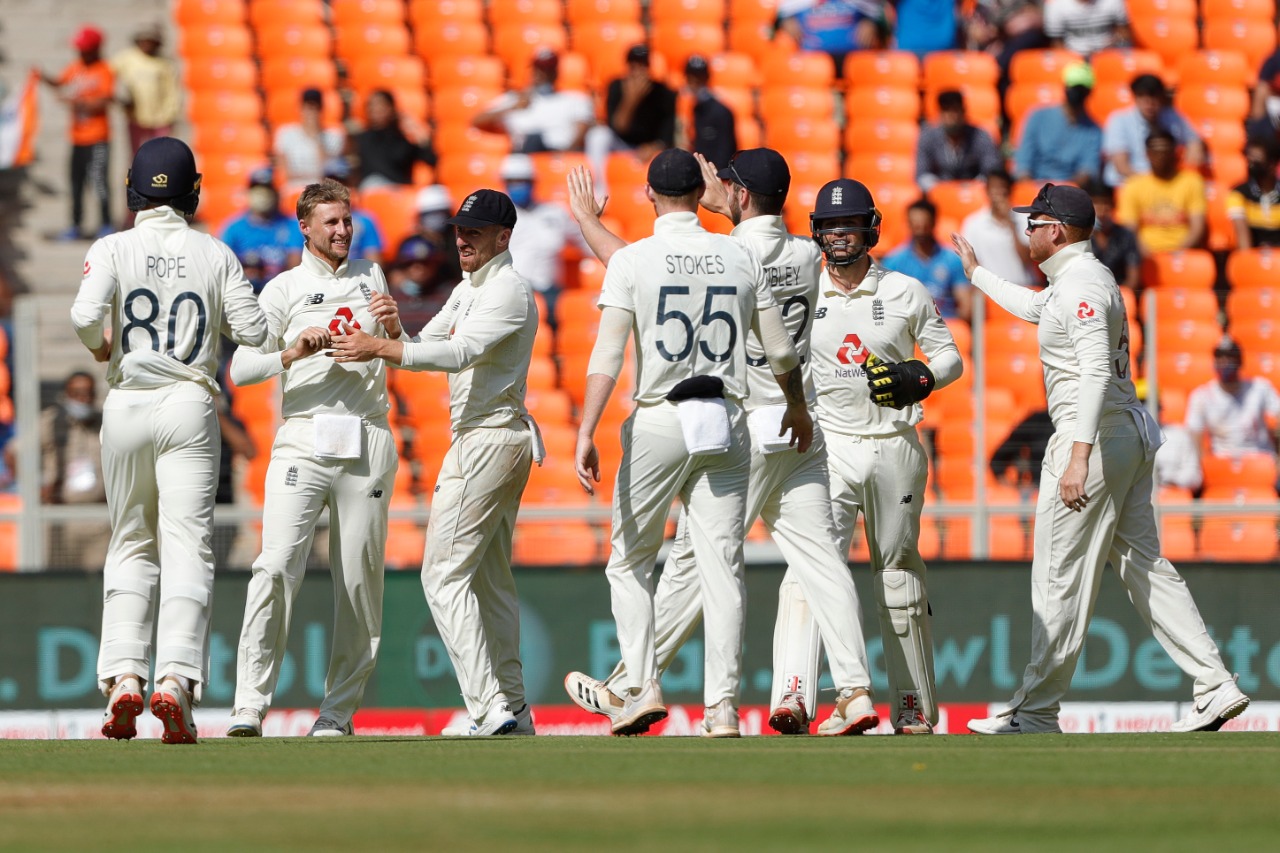 The strong Indian batting line-up crumbled down like a house of cards at the Narendra Modi Stadium on day 2 of the pink-ball Test. The hosts managed to put up a total of 145 runs in the first innings, taking a lead of 33 runs.

Captain Joe Root would have heaved a sigh of relief after his maiden fifer. He has become the first England skipper since Bob Willis in 1983 to take a Test fifer and his figures of 5/8 from 6.2 overs reminded many of the spells from former Australia batsman Michael Clarke.

That’s Tea on Day 2 of the third @Paytm #INDvENG #PinkBallTest!

We shall be back for the second session of the Day shortly!

While Root picked a fifer, Leach finished with figures of 4/54 from his 20 overs as Rohit Sharma (66) was the best batsman on display for the hosts.

The rest had no answer to Root and Leach on a wicket that was turning square at times on the second afternoon. Interestingly though, the ball that didn’t turn caused much damage on the first two days as the batsmen have found it tough to adapt to the skidding pink ball.

Former Australia spinner Shane Warne on Thursday said he was “very surprised” that India was not “super aggressive” in the first session of the second day.

“Just turned the tv on to see the score between #IndiaVEngland ! Wow, a bits happened in this 1st session & Eng are right back in this – big time. Favourites from here ? What could India chase in the last innings ? 150 tops even though they played 4 seamers. Awesome @root66,” Warne tweeted.

Very surprised that India weren’t super aggressive this morning. Seemed like the mindset and attitude was to be patient and just bat – lacked intent ! 50+ run lead India become favourites. Worth Archer steaming in for an over or two I reckon. Nose and toes !!!!!!!!

Vice-captain Ajinkya Rahane once again disappointed his fans, scoring only 7 runs. Wicket-keeper batsman Rishabh Pant (1) got out of a magnificent delivery off Root.

Ashwin and Ishant Sharma did try their bit as they hit 17 and 10* respectively, but it was clearly Root’s afternoon as the Indian lower-order had no answer to his disciplined effort.