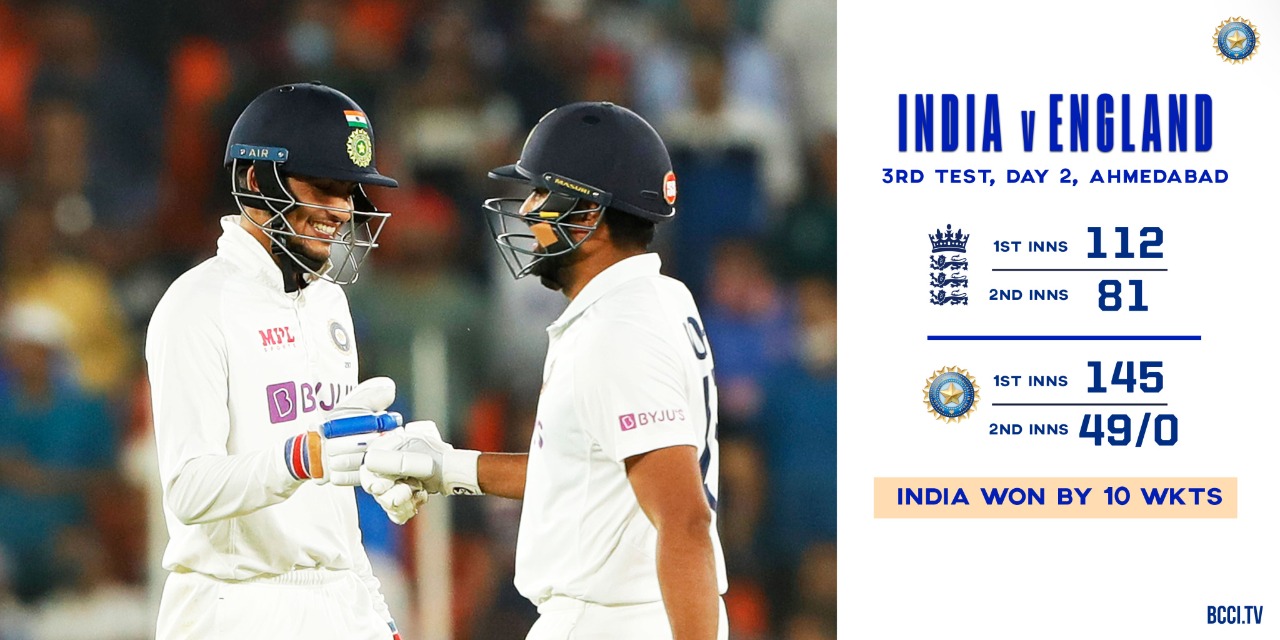 Riding on brilliant spells of spin bowling from Axar Patel and Ravichandran Ashwin, India registered a comprehensive 10-wicket win over England in the pink-ball Test at the Narendra Modi Stadium on Thursday to go 2-1 up in the four-match series.

In the end, English skipper Joe Root winning the toss and batting first meant nothing as the visitors were completely outplayed in the game.

Chasing 49 for a win, India raced home with 10 wickets in the bag as Rohit Sharma (25) and Shubman Gill (15) looked in a hurry to finish proceedings. Rohit finished it off in style by sending Root into the mid-wicket stands. The win has taken India one step closer to the final of the World Test Championship. But the star of the show was hometown boy Axar as he finished with 11 wickets in the game (six in the first innings and five in the second).

Senior partner Ashwin wasn’t to be left too far behind as he picked four wickets to finish with 7 in the game. Interestingly, the off-spinner also became the second-fastest to 400 Test wickets during England’s second innings when he trapped Jofra Archer plumb in front.

Root and Jack Leach’s domination in the opening session on the second day was indication enough that the English batsmen would have their task cut out in the second innings. And that is exactly how it panned out as Axar picked his third consecutive fifer in Test cricket.

It all started from the first ball of England’s second innings as Axar took the new ball and immediately sent back first innings’ top-scorer Zak Crawley for a duck. The flow of wickets didn’t stop from thereon with only Root (19) and Ben Stokes (25) looking like they were in with a chance to take England’s total past the 100-run mark.

But clearly, the Indian spinners had other ideas as they kept picking wickets in quick succession to ensure that the game didn’t roll out of their comfort zone for a second. Washington Sundar picked the last England wicket as he sent back James Anderson (0) to see the visitors’ innings folded up for 81 — their lowest in Test cricket against India.

Earlier, India lost seven wickets in 20.2 overs in the first session of the second day as the visitors rode on skipper Root’s maiden fifer. In the end, the hosts managed 145 in their first essay — a lead of 33 runs.

Root became the first England skipper since Bob Willis in 1983 to take a Test fifer as he finished with figures of 5/8 from 6.2 overs. Leach finished with figures of 4/54 from his 20 overs as Rohit Sharma (66) was the best batsman on display for the hosts. The rest had no answer to Root and Leach on a wicket that was turning square at times on the second afternoon.
Interestingly though, the ball that didn’t turn caused much damage on the first two days as the batsmen have found it tough to adapt to the skidding pink ball.
Starting the day on 99/3, Rohit did not have Ajinkya Rahane’s company for long as India’s Test deputy was out for 7 minutes after passing England’s first innings total. His lack of consistency will be a concern for the team management.

While Leach got the ball to skid onto Rahane and the batsman faltered by going back to a full ball, Rohit was the next to go as he missed a sweep off the left-arm spinner.

It was the Root show after that as he started with the wicket of dangerman Rishabh Pant. While Pant pushed away from the body and was caught by keeper Foakes, Washington Sundar and Axar Patel went back in quick succession without bothering the scorers.