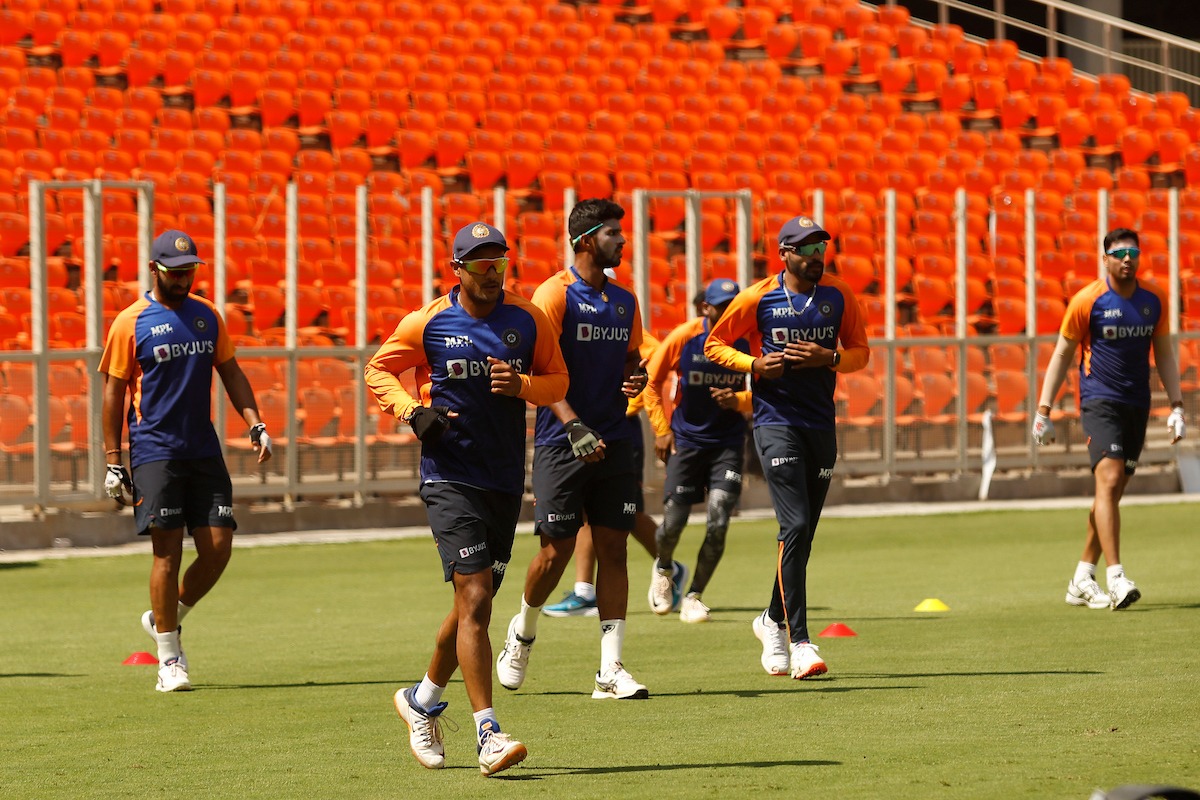 The Indian team will be eager to etch their name in the history of the World Test Championship by beating England at the Motera stadium. Virat Kohli will look to keep the winning momentum going when they take the field in the pink-ball Test, starting Wednesday.

Pink ball under lights will be a harrowing task for the Indian batters who will be up against Anderson and Broad.

The home team had defeated England by 317 runs in the second Test and now both teams are getting ready to battle it out in the day-night Test at the newly-built Motera Stadium. The pink-ball Test has traditionally offered a lot of assistance to the seamers, but this upcoming match at the Motera Stadium maybe a different ball game as Rohit Sharma on Sunday suggested that critics shouldn’t pull the BCCI up for preparing spin-friendly wickets.

#TeamIndia practice under lights as they gear up for the pink-ball Test at the Cricket Stadium at Motera. 👍👍 @Paytm #INDvENG

Here are a few snapshots from the nets session 📸👇 pic.twitter.com/bXOMd5ARxn

Umesh Yadav had passed his fitness Test on Sunday and as a result, he has been added to the hosts’ squad. The returning pacer may be given a go straight away along with Jasprit Bumrah and Ishant Sharma. But Mohammed Siraj will also look to give Umesh tough competition for a place in the XI.

Hours before the game, skipper Kohli admitted that playing the day-night Test will pose a lot of challenges for the batsmen.

“The pink ball tends to swing a lot more than the normal red ball that we play with. We have experienced that in the one match we played against Bangladesh in 2019. It’s much more challenging to play with the new ball in day-night Test regardless of what pitch you are playing on,” said Kohli.

As the world’s largest cricket stadium gears up to host the @Paytm #INDvENG pink-ball Test, excitement levels are high in the #TeamIndia camp 😎🙌 – by @RajalArora

“If you are starting your innings in the evening under lights then that one, one, and half-hour is very challenging. Yes, the spin will come into play for sure but I don’t think the new ball and fast bowlers can be ignored. The pink ball does bring them into the game till the ball is nice and shiny, something we are very well aware of and preparing accordingly,” he added.

It is no secret that the twilight period is the most challenging when it comes to a pink-ball Test match. And keeping that in mind, the floodlights at the Motera Stadium have been programmed in a manner that there will be no shadows hindering the sighting of the ball.