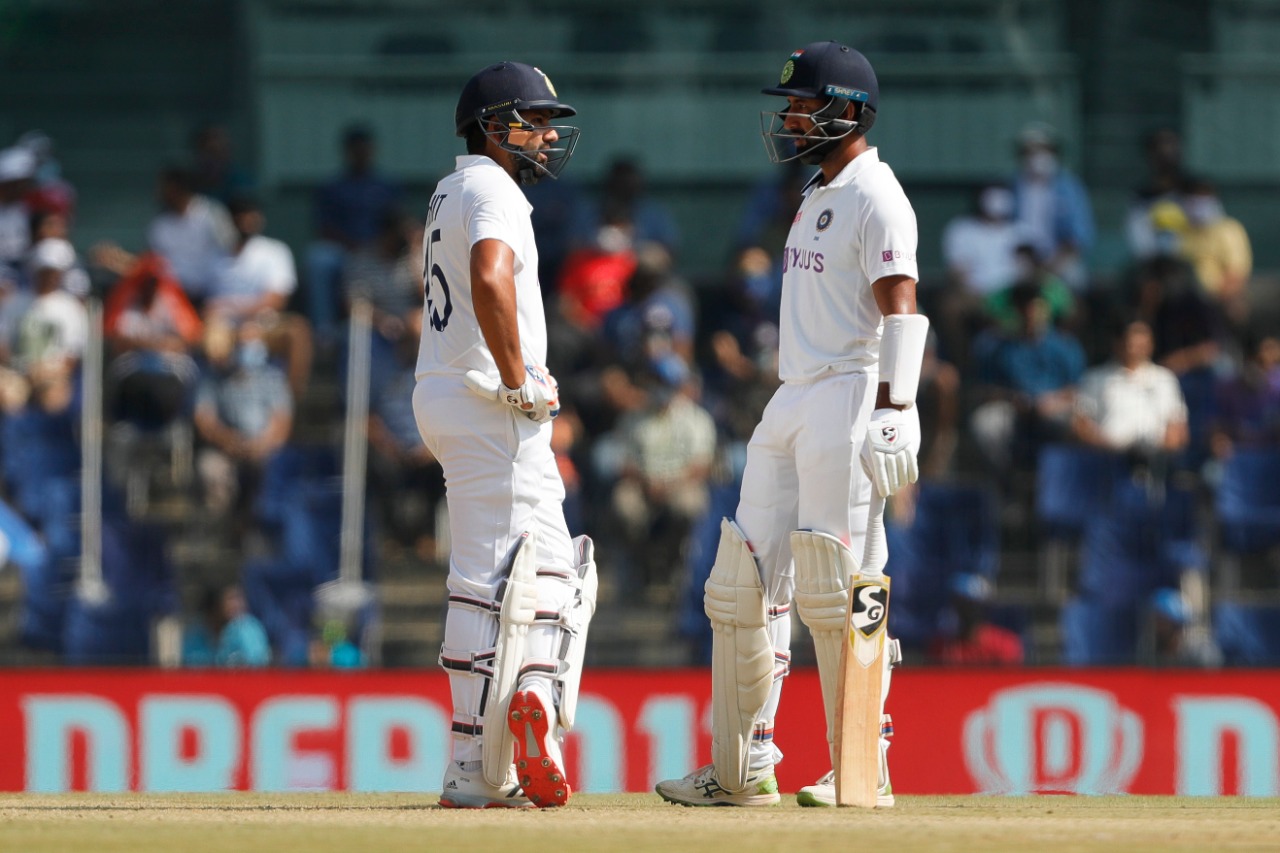 Day one of the second Test match went in favour of team India after Rohit Sharma’s sensational knock.

India lost Rohit, Ajinkya Rahane, and Ravichandran Ashwin in the final hour of the play as the hosts lost three wickets in the third session after holding the fort before tea. At stumps, India’s score reads 300/6 with Rishabh Pant and Axar Patel unbeaten at 33 and five runs respectively. For England, Jack Leach and Moeen Ali picked two while Olly Stone and skipper Joe Root scalped a wicket each.

Resuming the third session at 189/3, Rohit and Rahane continued their fine form in the game to put on 200 runs on board in the 58th over. Both the batsmen held the fort tight and didn’t give England any chance to take the driver’s seat.

While Rahane scored his 23rd Test fifty, Rohit brought went past the 150-run mark as India batsmen continued a solid display of skills on day one of the second Test.
Rohit brought up the 150-partnership with Rahane in style as he lofted the ball wide over mid-on dancing down the track against Jack Leach in the 71st over.

However, Rohit Sharma’s brilliant innings of 161 came to an end as the batsman departed after sweeping Leach straight into Moeen’s hands at deep square leg.

The Hitman was in fine form as he bludgeoned 1⃣8⃣ fours & 2⃣ sixes in his knock of 1⃣6⃣1⃣ in the 1st innings of the 2nd @Paytm #INDvENG Test against England in Chennai. 👏👏#TeamIndia

Also read: Meet Indian-Origin Arora Akanksha, Who Has Announced Her Candidacy To Be UN Chief

Earlier after winning the toss, India suffered a poor start in the first innings. Skipper Virat Kohli disappointed his fans after he got out on a duck.

Spinner Jack Leach got the better of Pujara (21) and as a result, the batsman was sent back to the pavilion. This dismissal also brought an end to an 85-run stand between Pujara and Rohit.

In the very next over, Moeen Ali bowled a stunning delivery and it turned to rattle the stumps of Virat Kohli (0), reducing India to 86/3. In the end, Rahane and Rohit ensured that the hosts did not lose more wickets before the lunch break.

Earlier, skipper Kohli had won the toss and he opted to bat first. The hosts made three changes to their lineup as they brought in Axar Patel, Kuldeep Yadav, and Mohammed Siraj in place of Shahbaz Nadeem, Washington Sundar, and Jasprit Bumrah.

Congratulations to the all-rounder who receives his Test cap from #TeamIndia Captain @imVkohli 🔝👌@Paytm #INDvENG pic.twitter.com/WIugeXY15D

On the other hand, England made four changes as the side brought in Moeen Ali, Stuart Broad, Olly Stone, and Ben Foakes in place of Dominic Bess, Jofra Archer, James Anderson, and Jos Buttler.