After suburban train services in Mumbai came back on track after a gap of 10 month break due to coronavirus pandemic, a video of a crowded platform has started making rounds on the internet. It is being claimed that the video is from crowded Borivali station on the first day after local train services were operationalised for all commuters.

The caption of the video read, ‘First day  after covid Suburban train services open for all commuters….A scene from Borivali today…’. 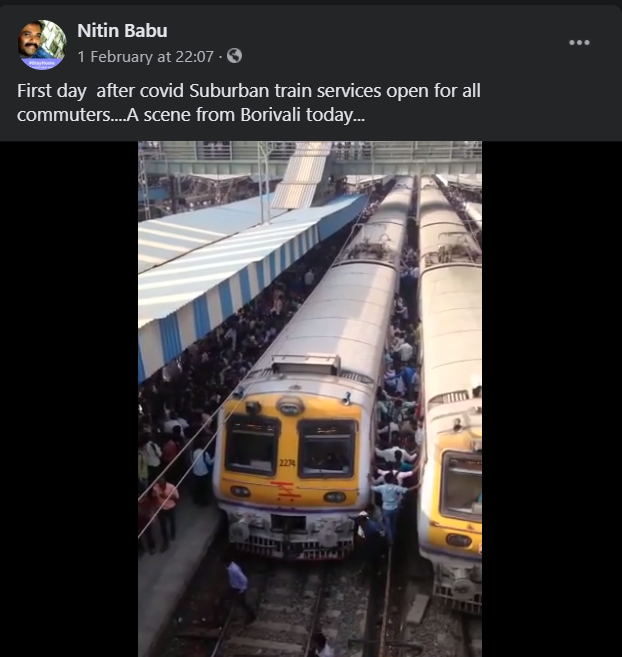 Other similar posts can be seen here, here and here.

On putting the keyframes of the video through Reverse Image Search, we found the same video on YouTube published on March 21, 2016. The title of the video read, ‘Amazing mumbai local crowd’.

We also found that the same video has been uploaded in 2019 on YouTube.

Western Railway, Mumbai Central Division and Divisional Railway Manager- Mumbai Division of Western Railway, took to Twitter to confirm that the video is old and no large crowd was reported from Borivali station.

The video is old. Requesting not to share such misguiding videos.

Similarly, a tweet was put out from the official handle of Western Railway (Mumbai Central Division), stating that security forces are deployed at Mumbai’s suburban sections to regulate the crowd, and no large crowd was reported from any of the sections.

The video seems to be a fake one, as local trains resumed for general public only on yesterday after almost 10 months. Sufficient uniformed staff are deployed at stations to regulate the crowd. No such instance of crowd congregation has been reported from across suburban section.

We also found a tweet by The Free Press Journal dated February 1, 2021, showing the video of the crowd at Borivali station.

Back to normal? A glimpse of commuters in Borivali, as Mumbai reopens local trains for the general public after more than 10 months#MumbaiLocalTrains #Mumbaikar #MumbaiLocal @WesternRly pic.twitter.com/kl6DX4Vv0K

NewsMobile could not independently verify the origin of the video. But, the above information establishes the fact that the video in question is old as it was already been in circulation on the internet much before the Mumbai local trains were resumed on February 1, 2021.