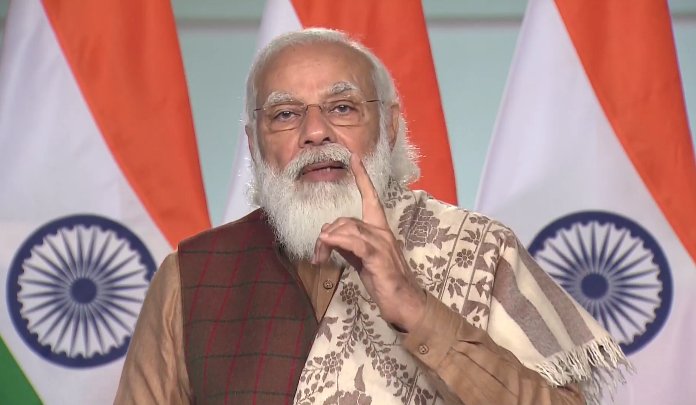 Prime Minister Narendra Modi on Monday hailed the Union Budget 2021-22 and said it will enhance India’s self-confidence amid the coronavirus pandemic while asserting that the budget envisions self-reliance.

“The Union Budget 2021-22 has been presented amid unprecedented circumstances…. Amid the situation created by COVID-19. Today’s budget will enhance India’s self-confidence and will instill self-confidence in the world.The budget has the vision of self-reliance and takes along every section of the society,” PM Modi said after the Union Budget was tabled in the Parliament.

“We have taken the approach of widening new opportunities for growth, new openings for our youth, a new high to human resources, developing new regions for infrastructure, walking towards technology and bring new reforms in this Budget,” the PM said.

The Prime Minister lauded Finance Minister Nirmala Sitharaman and her team for the budget.

“This budget will bring several positive changes for individuals, investors, industry, and infrastructure sector. I congratulate FM Nirmala Sitharaman Ji and her team on this budget,” he said.

Speaking further on the budget, he said: “The government, while keeping in sync with fiscal sustainability, stressed on increasing the budget size, and did not put pressure on the citizens. Our government has always tried to keep the budget transparent.”
“Many thought we will put the tax burden on the common man. However, we focused on a transparent budget,” he added.

PM Modi said that the budget focuses on increasing farmers’ income, several measures have been taken in this direction.

“Farmers will be able to get loans easily. Provisions have been made to strengthen APMC markets with the help of Agriculture Infrastructure Fund,” he said.
The Prime Minister said that the budget focuses on sectors that are related to both wealth and wellness.

“A special focus is also on infrastructure and MSME sectors. This budget has categorically made announcements to ease and make lives of women better. Several systematic changes have also been made, which is set to help growth and job creation in the country,” he said.
Earlier in the day, Finance Minister Nirmala Sitharaman presented the first-ever digital Union budget. She announced higher capital expenditure for the FY 2021-22 and focused on providing a major boost to healthcare and infrastructure building.

“I thank Prime Minister Narendra Modiji and Union Home Minister Amit Shahji for announcing a new gas pipeline project for the development of Jammu and Kashmir in Budget 2021. I congratulate Finance Minister Nirmala Sitharamanji for an inclusive and growth-oriented historic budget for Aatmanirbhar Bharat,” said Sinha on Twitter.

The key announcements in the Union Budget for the power infrastructure sector include the extension of Ujjwala Scheme to cover 1 crore more beneficiaries, the addition of 100 more districts in the next 3 years to the city gas distribution network and setting up of an independent Gas Transport System Operator.

While presenting the Union Budget on Monday, Finance Minister Nirmala Sitharaman announced several proposals for the benefit of depositors, investors, and taxpayers. She said that the tax system should put the minimum burden on the taxpayers.

Senior citizens have been exempted from filing their IT returns for those above 75 years of age having a pension and interest income.

Senior citizens exempted from filing their IT returns for those above 75 years of age having pension and interest income #Budget2021https://t.co/8y3MPkiKSt pic.twitter.com/Q2jVrSIhSE

The centre will launch a Rs 3,05,984 crore scheme to reform the power distribution sector in the country.
Finance Minister said there is a monopoly of distribution companies across the country and the sector demands competitiveness. ”A framework will be put in place to give consumers alternatives to choose from among more than one distribution company,” she added.

The government is committed to building 100 new Sainik schools in partnership with NGOs, private schools, and states. The Centre would also introduce the legislation this year to implement the setting-up of the Higher Education Commission of India.

The government has made a provision of Rs 15,700 crore for the Ministry of Micro, Small and Medium Enterprises (MSME) sector in the Union Budget 2021-22.

Stay tuned for all the top developments on NewsMobile: