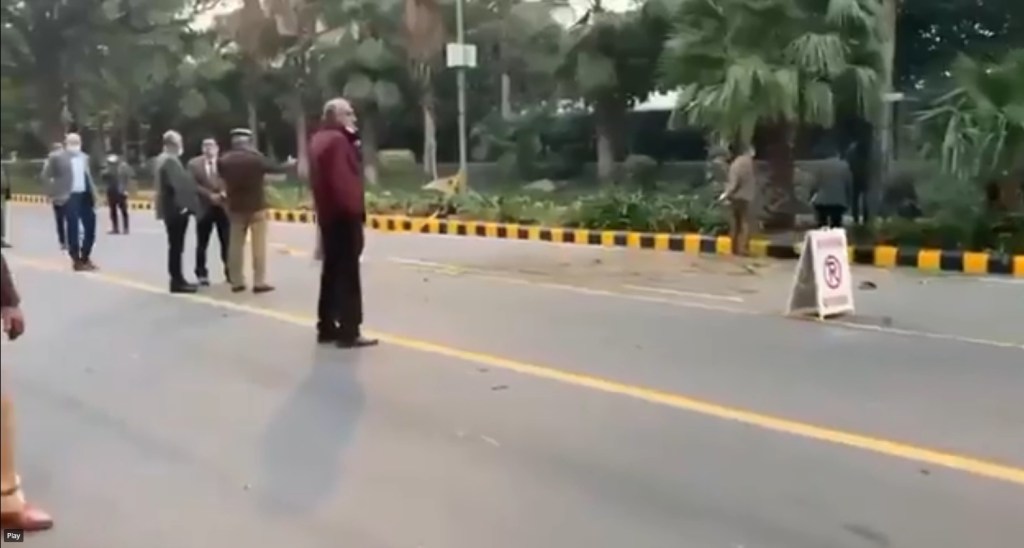 In a fresh twist to the ongoing investigation in the blast near Israel Embassy, terror outfit Jaish-ul-Hind has claimed responsibility for the blast on social media.

Investigating agencies probing the blast have found a Telegram chat of a suspected channel in which Jaish-ul-Hind has taken responsibility of the minor IED blast near the Embassy on Friday evening. The terror group is seen taking pride over the attack on social media even as investigating agencies are still verifying the claim.

Highly placed sources have also confirmed the presence of battery in the crude IED which acted as a catalyst for the explosion. As soon as the blast happened, the battery was blown to pieces.

Suspecting that Friday’s blast outside the Israeli Embassy here could be a terror attack, Israeli Ambassador to India, Dr Ron Malka meanwhile asserted on Saturday that there is full cooperation between New Delhi and Tel Aviv on the probe.

“The investigation is ongoing, gathering all evidence from the scene. There is full collaboration between Indian and Israeli authorities. As of now, our strong assumption is that it is a terror attack that targeted the Israeli Embassy. Fortunately, nobody was hurt,” Ron Malka told news agency ANI.

“All options are there on the table. Yesterday when this terror attack was conducted, we celebrated the 29th anniversary of the full establishment of diplomatic relations between Israel and India, exactly yesterday. So, it may not be a coincidence but all options are being investigated,” he added.

It is more or less established now that the bomb was placed on ground as is evident from the crater that has been found, said sources. Since police personnel and Israeli security guards stand outside the embassy, this was the closest spot where the bomb could be placed.

Meanwhile, CCTV footage obtained by the Delhi Police Special Cell Team on Saturday has revealed that a taxi dropped off two people near the Israel Embassy blast spot in New Delhi.

Delhi Police has contacted the taxi driver and enquired about the two people. Police are sketching the pictures of the two on the basis of inputs received from the taxi driver.

Delhi Police confirmed that the IED went off at 5.05 pm on Friday. Though no one was injured, multiple cars were damaged in the blast. According to sources, an envelope addressed to the Israel Embassy containing a note was found at the blast site.

Sources said the envelope was addressed to embassy officials, but did not divulge any further details including contents of the note. The blast happened barely 1.8 kilometres from the spot where the Beating Retreat ceremony was underway to mark the culmination of Republic Day celebrations. President Ram Nath Kovind, Vice President M Venkaiah Naidu and Prime Minister Narendra Modi were present at the ceremony.

External affairs minister S Jaishankar took to Twitter on Friday to say that he spoke to his Israeli counterpart, Gabi Ashkenazi and said that the Indian government has taken the blasts “very seriously” and that “no effort will be spared to find the culprits.”

Spoke just now to Israeli FM Gabi Ashkenazi about explosion outside Israeli Embassy. We take this very seriously.Assured him of the fullest protection for the Embassy & Israeli diplomats. Matter is under investigation &no effort will be spared to find culprits: EAM @DrSJaishankar pic.twitter.com/5WCnsIRELQ

A team of around 6-7 NIA officers has also reached the blast site near Israel Embassy for further probe. According to sources, broken pieces of a cold drink can and ball bearings have been recovered from the spot and sent for forensic examination.

Following the blast, an alert has also been issued at all airports, important installations and government buildings in view of the blast. Enhanced security measures have been put in place, the Central Industrial Security Force said.