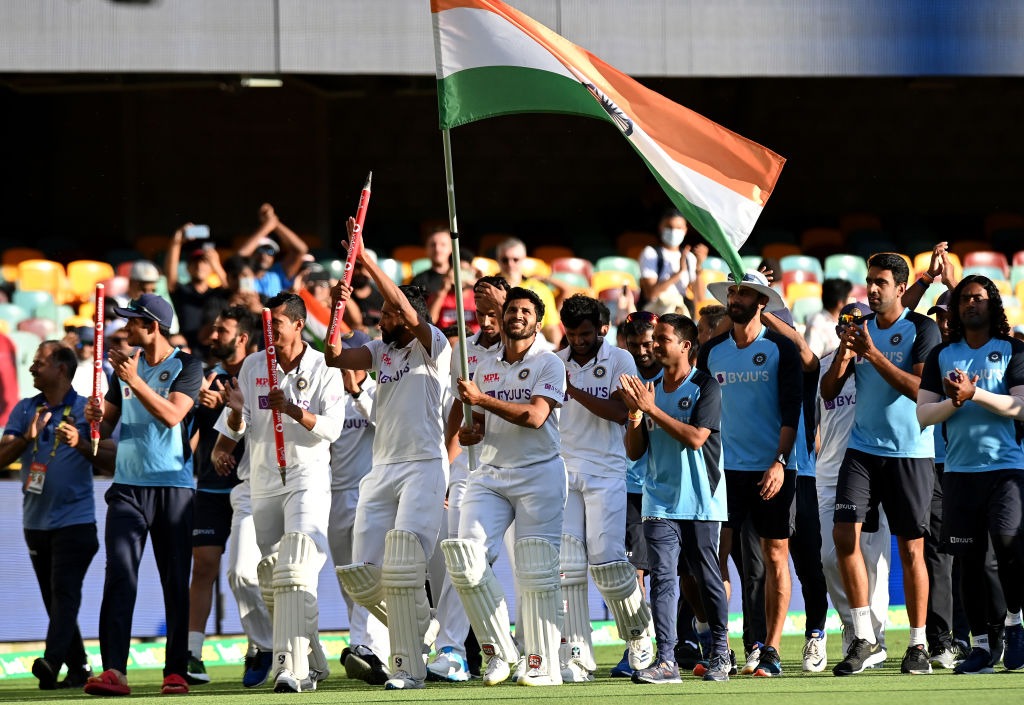 Injury-ravaged Team India with sheer grit and resilience defeated Australia in the fourth and last Test match of the Border Gavaskar trophy. Heroics of Pujara, Gill, and Pant helped the visitors to overhaul the target of 328 on the last day of the Test match.

The victory at Gabba is also pivotal as it comes after Adelaide’s debacle where India was reduced to 36 runs, the record lowest for the visitors in the longer format of the game.

It took 32 years and two months, but the unthinkable has been achieved as a young Indian team beat the home side by three wickets against all odds in the final Test of the series at The Gabba to take the series 2-1.

Wicket-keeper batsman Rishabh Pant will be forgiven for all the mistakes he has made through the series with wicket-keeping gloves in hand as each of the 89 runs that he scored in the final hour on Tuesday was worth its weight in gold.

A famous Test win sees India retain the Border-Gavaskar Trophy in a thrilling end to a series that becomes an instant classic: https://t.co/qvYTMSiZsl #AUSvIND pic.twitter.com/ulSqdyK0Ck

It was only poetic justice that he hit a boundary to win India a thriller. The last time a visiting team came out triumphant from the Brisbane Cricket Ground was back in November 1988 when the mighty West Indian outfit under the leadership of Viv Richards thrashed Allan Border’s team by 9 wickets. What makes the feat even more commendable is how the Indians fought multiple injuries and mental fatigue due to the bio-bubble restrictions to register a historic win.

The scoreboard witnessed India’s bravery on a difficult pitch to bat on. Cheteshwar Pujara faced 211 balls to score crucial 56 runs. It was also his slowest in the longest format of the game off 196 deliveries. By the second session of Day 5, the veteran had already suffered multiple nasty blows to his head, including a bouncer by pacer Josh Hazlewood that ended up knocking off a piece of the batsman’s helmet.

The story of India’s success was narrated by two other batsmen – Opener Shubman Gill and Rishabh Pant. Gill played 146 deliveries for his 91. Former Indian batsman VVS Laxman praised his gritty knock and said that he deserved a hundred.

From Prime Minister Narendra Modi to BCCI Chief Sourav Ganguly – everyone has been vocal about India’s historic win on the social media platform.

We are all overjoyed at the success of the Indian Cricket Team in Australia. Their remarkable energy and passion was visible throughout. So was their stellar intent, remarkable grit and determination. Congratulations to the team! Best wishes for your future endeavours.

Just a remarkable win…To go to Australia and win a test series in this way ..will be remembered in the history of indian cricket forever ..Bcci announces a 5 cr bonus for the team ..The value of this win is beyond any number ..well done to every member of the touring party..

One of the greatest test series wins ever. Congrats India and well played Australia, what a series #INDvsAUS

EVERY SESSION WE DISCOVERED A NEW HERO.
Every time we got hit, we stayed put & stood taller. We pushed boundaries of belief to play fearless but not careless cricket. Injuries & uncertainties were countered with poise & confidence. One of the greatest series wins!
Congrats India. pic.twitter.com/ZtCChUURLV

Indian team faced brutal blows not only from the Australian bowlers but also from their veterans. The visitors were massively trolled after the Adelaide collapse. Social media is in full flow with banters, memes, tweets hailing Indian players for the courage they have shown at the Gabba.

#Aus Media is on RIP for now…
Not just these people @MClarke23 @RickyPonting @juniorwaugh349 @MichaelVaughan also @tdpaine36 saying to Indian batsmen…
All these guys right now must be like this 🤫 pic.twitter.com/vWc5oveZYN