Fact Check: Video Of Accident From Pune Shared As That Of Hyderabad | Newsmobile
Wednesday, August 10, 2022

A video of an accident on a flyover is being shared on social media with a claim that it is from Hyderabad. 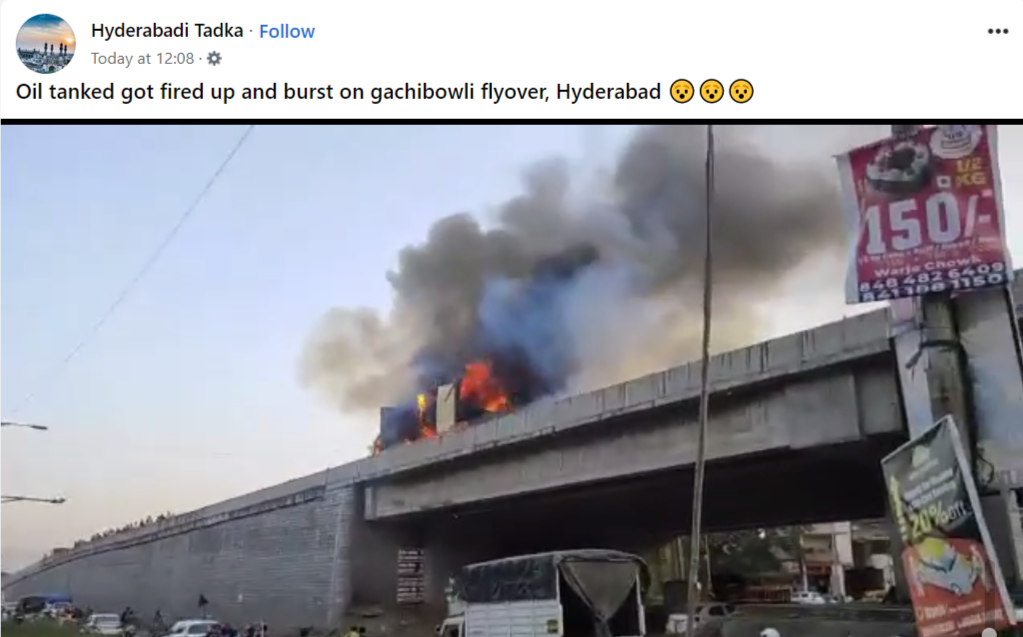 We extracted keyframes of the video and found that the same video was uploaded on YouTube on December 5, 2020.

We also found another video of the same incident taken from a distance. “Pune city Today warje side Fly over bridge one vehicle catch Fire 🔥 It’s not blast it’s accident,” the title of the YouTube video, uploaded on December 5, 2020, read.

Based on this, we ran a keyword search and found a report by TOI dated December 6, 2020.  As per the report, the truck caught fire on the Warje flyover. However, no one was injured in the incident.

“The truck was heading towards Kolhapur from Kalamboli. The driver of the truck pulled the truck to the left lane and managed to stop it. After alighting from the truck, he spotted fire beneath the driver’s cabin. Within minutes, the flames engulfed the entire truck,” TOI quoted senior police inspector Machindra Pandit of Warje police station as saying.
Moreover, after the video went viral with the misleading claim, the Cyberabad police also put out a clarification on their social media pages. The links can be seen here and here.
“This viral video is not of Gachibowli flyover. It is a FALSE news. It had happened on the Warje bridge, Pune a few days back. No such incidents have occurred in Hyderabad. Warning: Persons spreading rumours/misinformation leading to public fear will be dealt as per law,” they tweeted.

This viral video is not of Gachibowli flyover. It is a FALSE news.
It had happened on the Warje bridge, Pune a few days back.
No such incidents have occurred in Hyderabad.
Warning : Persons spreading rumours/misinformation leading to public fear will be dealt as per law. pic.twitter.com/ViOYlpxJDA

Hence, from the above information, it is clear that the viral post is misleading.