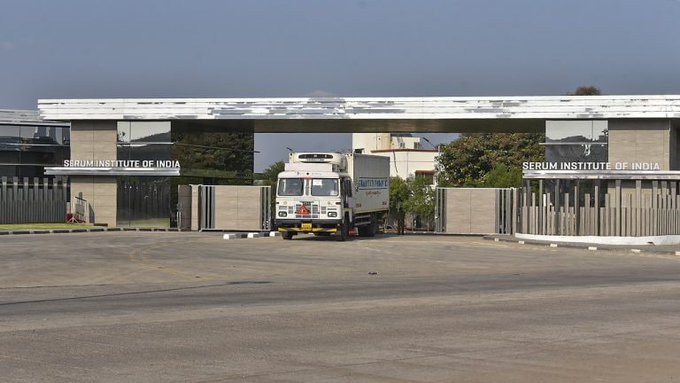 Ahead of the scheduled January 16 rollout for the world’s largest vaccination drive, the first consignment containing vials of ‘Covishield’ vaccine were despatched from Pune-based Serum Institute of India in the wee hours of Tuesday.

Three temperature-controlled trucks – carrying 478 boxes of the vaccines – rolled out of the Serum Institute gates shortly before 5 am and left for Pune airport amid tight security cover. The vaccines are being sent to 13 locations across the country on Tuesday. A puja was reportedly performed at Serum Institute prior to the roll out of the trucks.

“The first flight will leave for Delhi from Pune airport,” Sandip Bhosale, SB Logistics, the logistics team which is handling air transport of Covishield vaccine from Pune International Airport told news agency ANI. A total of eight flights- two cargo flights and other regular commercial flights will carry the vaccines, he said. “All vaccines will be dispatched by 10 am,” he added.

“The first consignment of the vaccine has been dispatched from the facility of Serum Institute of India here. We have made elaborate security arrangements,” said Namrata Patil, Deputy Superintendent of Police (DCP), Pune.

Serum Institute has received a purchase order from the Government of India for 11 million doses of Covishield vaccine, which would be available at the price of Rs 200 per dose, SII officials had said on Monday.

The first phase of the COVID-19 vaccination drive in the country is starting from January 16. Prime Minister Narendra Modi had earlier said “We aim to vaccinate 30 crore people in the next few months.”