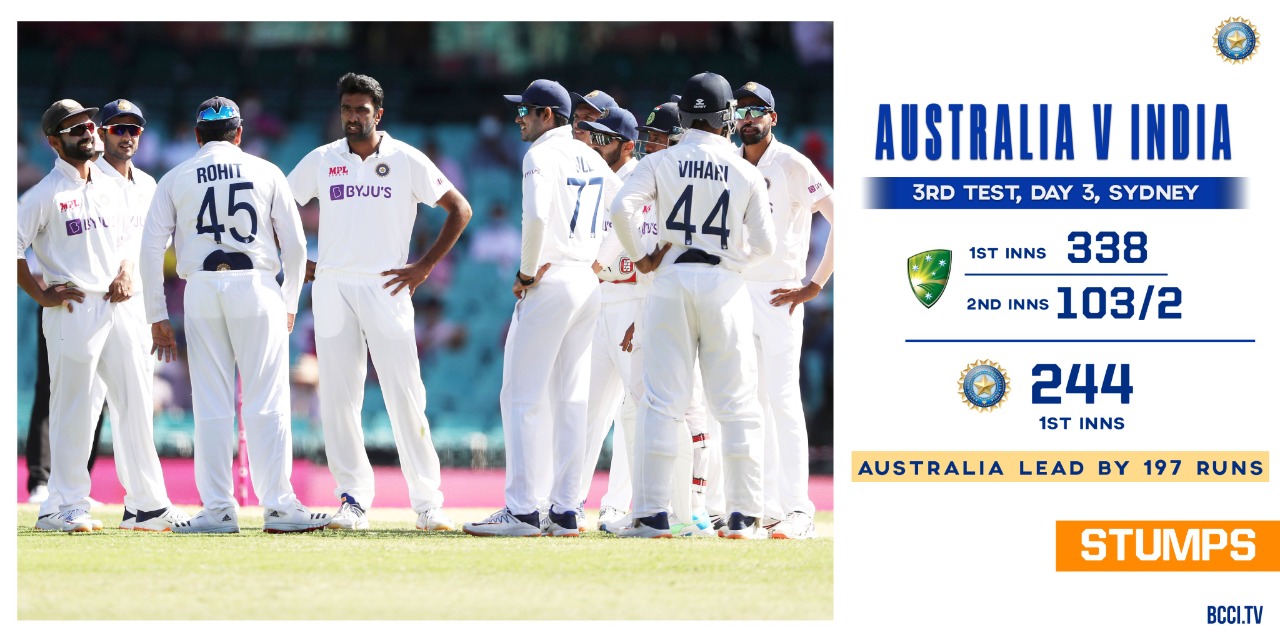 It’s all looking downhill for team India at the SCG. The third day of the pink test ended on a good note for the home team with Tim Paine-led side scoring 103 in 29 overs.

Despite sending both the Aussie openers back to the hut by the 10th over, the Indian bowlers failed to penetrate further as Australia’s score read 103/2 at stumps.

Labuschagne batting on 47 and Smith on 29 have put Australia in a dominating position. With the odd-ball keeping low, the lead of 197 runs with eight wickets in the bag looks more than handy as the Aussies look to go for the kill.

Brilliant with the ball and unreal in the field, Australia will now look to build a match-winning lead with their star duo at the crease.@ARamseyCricket‘s report from day three: https://t.co/Wsta0O9i2X #AUSvIND pic.twitter.com/EDraE9EsWw

The Indian bowlers had started impressively with pacer Mohammed Siraj removing debutant Will Pucovski (10) in the sixth over while spinner Ravichandran Ashwin picked David Warner (13) for the 10th time in the longest format of the game.

But India’s joy ended right there on the third evening as Labuschagne and Smith then added an unbeaten 68 off 121 balls to all but bat India out of the game. It will take a herculean task from the Indians to make a comeback into this game after a middle-order collapse saw India fold up for 244 in their first essay.

It was a dynamite display in the field by Australia! Watch all 10 Indian wickets to fall here #AUSvIND pic.twitter.com/4I05u5eEt9

R Ashwin was impressive with the ball, especially against David Warner. He dismissed the southpaw and registered his 193rd wicket against left-handers. He has also achieved a unique feat as he now has the most wickets against left-handers in the longest format of the game.

Injuries to wicket-keeper Rishabh Pant and all-rounder Ravindra Jadeja isn’t a good sign. Both the players were taken for scans and it will be interesting to see if Jadeja returns to the field on the fourth morning as the Sydney wicket is known to start turning from the closing stages of the third day.

UPDATE – Ravindra Jadeja suffered a blow to his left thumb while batting. He has been taken for scans.#AUSvIND pic.twitter.com/DOG8SBXPue

While Pant received a nasty hit on his left elbow after missing a pull shot against pacer Pat Cummins, Jadeja was hit on the left thumb as he fended at a rising delivery from Mitchell Starc. Wriddhiman Saha kept wickets in Pant’s absence while Mayank Agarwal came in as substitute fielder for Jadeja.

India batsman Cheteshwar Pujara also said that the dismissal of wicket-keeper Rishabh Pant was the turnaround moment of the day.

Earlier, India’s middle and lower-order failed to get going and the second session saw six wickets falling for 64 runs. In the first session, Australia managed to get the breakthroughs of Ajinkya Rahane and Hanuma Vihari. Cummins cleaned up Rahane (22) in the 55th over of the innings while Vihari faced 38 balls for his four runs and was finally run out.