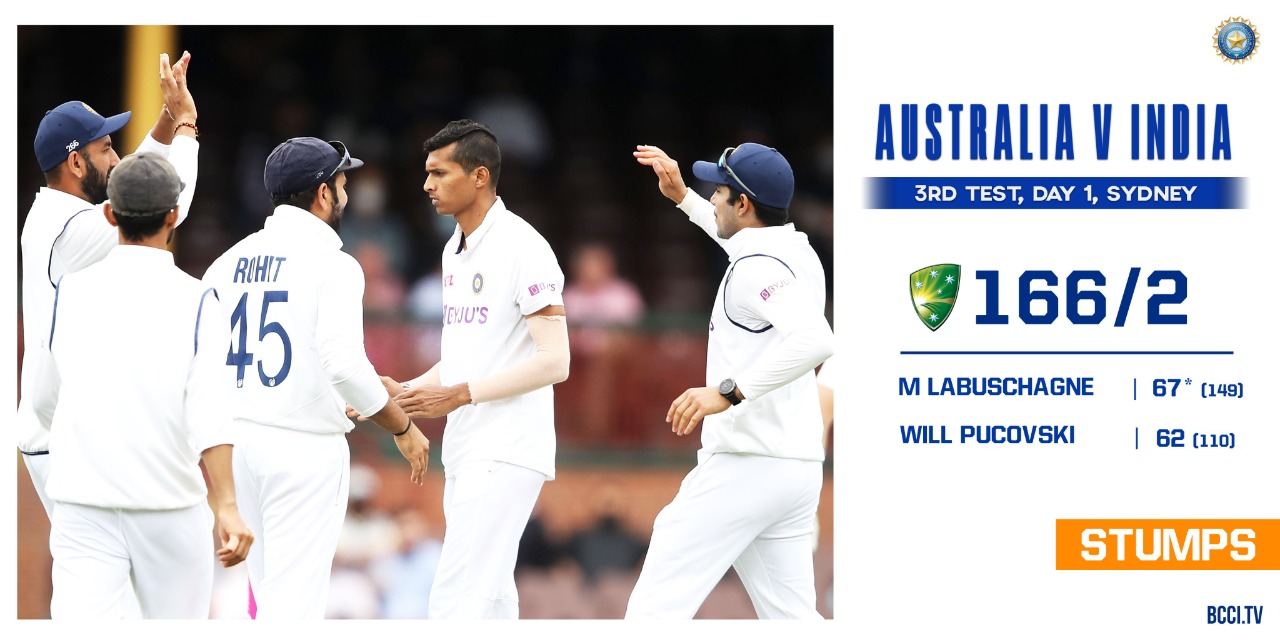 Australia is eyeing a massive total in the first innings of the third test match at the SCG. Though the first day of the Sydney Test was affected by rain, the hosts have managed to put a total of 166/2 in 55 overs.

Debutant Will Pucovski rode his luck and Marnus Labuschange showed resolve as the duo hit half-centuries to put the home team in a dominating position against the inexperienced Indian bowling line-up.

Before getting out, Pucovski made 62 runs. Former Australia skipper Ricky Ponting lauded debutant’s knock against India and said, ‘the opening batsman shows the promising sign and rapt for the longest format.’

Is there a bit of Ponting in this Pucovski pull?

The shot that brought up 50 for the Victorian! #AUSvIND pic.twitter.com/mykOyBtSPr

At stumps, Australia’s score read 166/2 in 55 overs with Labuschagne and Smith unbeaten on 67 and 31 runs respectively. On a day when the Indian bowlers had to toil hard — for the first time in the Test series — 35 overs were lost due to rain.

The first session saw just 7.1 over being bowled and the persistent drizzle brought about an early call for lunch as the hosts’ score read 21/1. In the second session, 23.5 overs were bowled and the hosts added 86 runs to their score.

While Pucovski did bring up a fifty on debut, he did get a few chances to help prolong his stay in the middle. In the 21st over of the innings, wicket-keeper Rishabh Pant dropped a regulation chance off the bowling of Ashwin and India lost an opportunity to put the hosts in a spot of bother.

A rollercoaster of emotions for Will Pucovski! Initially given out, but on closer inspection he’s recalled to the crease! #OhWhatAFeeling@Toyota_Aus | #AUSvIND pic.twitter.com/WgT5lCRjAE

The misery for Pant did not end there, as he dropped another catch off the bowling of Mohammad Siraj, and as a result, Pucovski got his second reprieve of the day. The opener kept riding his luck and after a couple of catching chances, he looked ready to get run out after a miscommunication with Labuschagne. But a poor throw from Jasprit Bumrah saved him again.

Every year the New Year Test in Sydney sees the entire ground adorned in Pink – right from the stands to the crowd. The first time Sydney hosted a Pink Test in 2009 when Australia took on South Africa. Since then, the tradition has continued and once again this year both teams will come together for a cause. It is played in honour of former Australian pacer Glenn McGrath’s late wife Jane McGrath. The money raised then goes to the McGrath Foundation.

It is a breast cancer support and education charity in Australia, which raises money to place McGrath Breast Care Nurses in communities across Australia and increase breast health awareness.